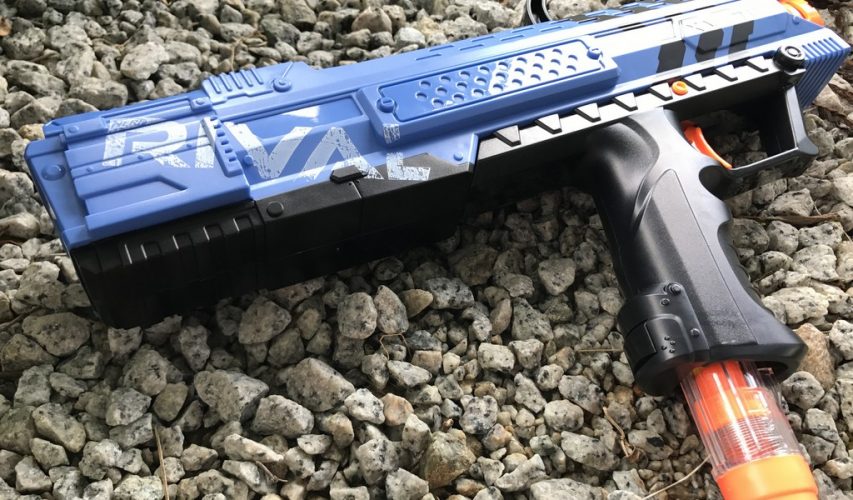 If it’s a battle you want to win, always go for the balls.

Hasbro’s Nerf has longed been the premiere arsenal for recreating blaster fights at home, but their use in open area combat is not always perfect. The long darts do not play nice with the wind, and players know that they need to compensate for their aim, by firing at an arc angle.

Then there is the aftermath, where you need to pick up the foam darts. The occasional jam means the foam gets bent out of shape, which impacts performance, as imperfections in the material affect a dart’s trajectory. Which means players need to buy more darts.In comes the Rival series, which is Hasbro’s attempt at engaging an older playing audience. Instead of darts, the Rival range uses one-inch wide soft foam balls. The dimples on the surface of the sphere are identical to that of golf balls, except that these are malleable. They are made of a denser material compared to the foam darts, no matter how you squish them, they revert to their circular form almost immediately.  The blaster itself packs a muzzle velocity of 109 km/h, and the pressure creates a backspin with the foam ball. The dimples act as stabilisers for the foam ball, so that it maintains its trajectory, giving each shot a new level of accuracy. 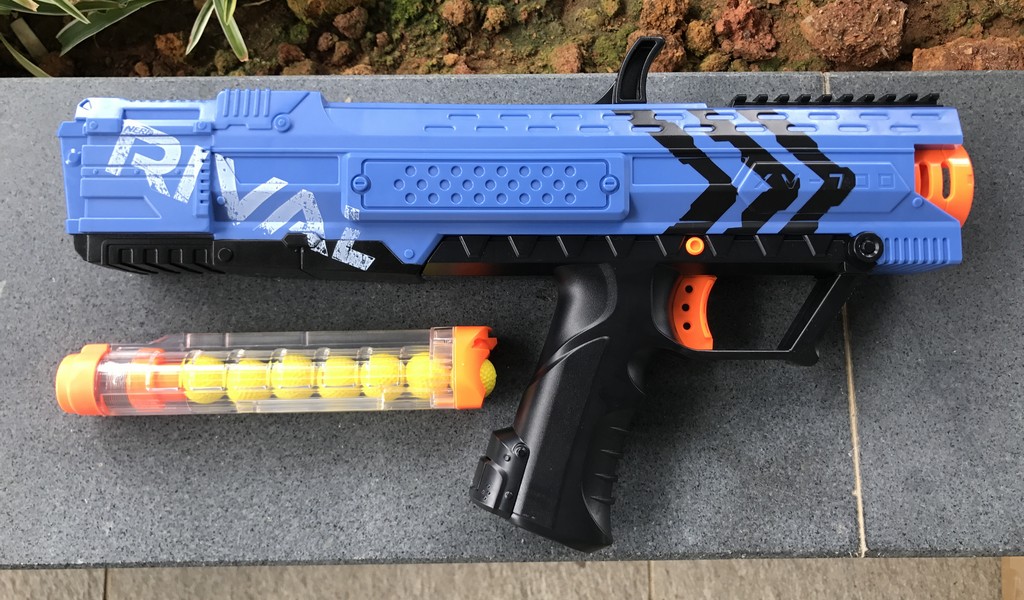 And these are the biggest advantages of the Rival series. These damn balls come at you at an amazing speed, making dodging more difficult or even impossible, and they are built for accuracy. Players no longer have to compensate by firing at an arc. Point and shoot, and the other party will cower at the presence of your balls of fury. The Apollo is a spring-action blaster and has a 7-round magazine. Compared to the Nerf Rival Atlas XVI-1200, which holds 12 rounds, and the overkill that is the Rival Khaos MXVI 4000, it seems positively puny, but it packs a wallop. As there are no batteries, players have to cock the blaster with each discharge. The spring mechanism is located at the top of the blaster of this single handed weapon, but you will need two hands to do this. Players also need to push the handle back to its original position, before the blaster will fire. 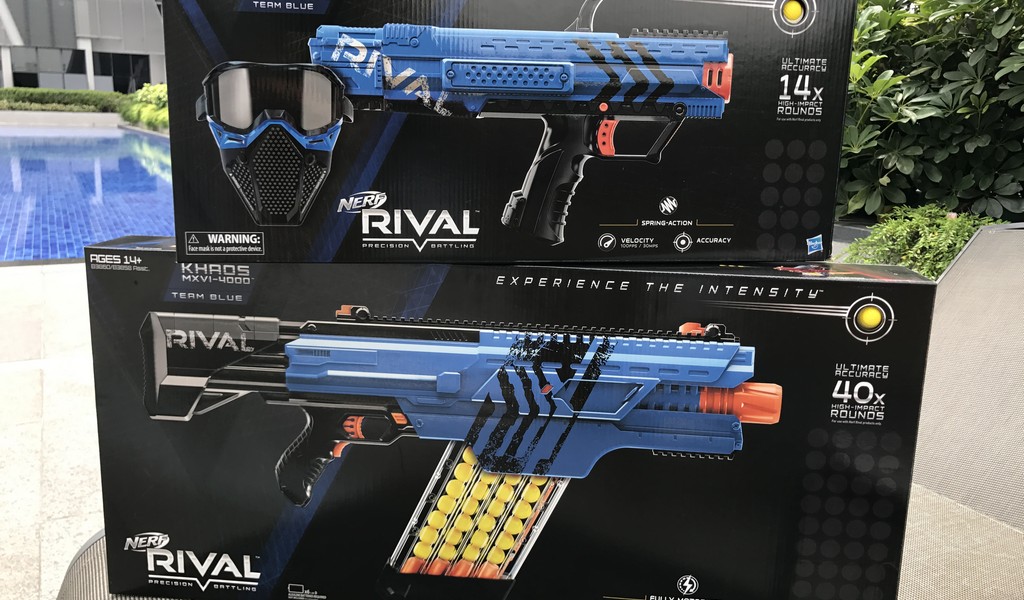 The difference in ammunition and design means that while it falls under the Nerf umbrella, the Rival is like the earlier Vortex series where the weapons are not compatible across the different series. Make no mistake, it stings to be at the receiving end of this blaster, but that’s where the fun it. The balls fly all over, even across great distances, which adds a greater dimension in your simulated battles. I tested this at my void deck and the balls went straight for over 10 metres, and could land to about 20 meters away, which technically means experienced players can push the distance further by firing at an arc. It kind of sucks that the Apollo’s magazine only holds 7 rounds, but when it comes to ease of use and how it handles, the Apollo strikes a nice balance. Because of the way the spring mechanism is designed to be at the top of the weapon, the handle interferes with any sort of aiming you might want to do with the weapon. 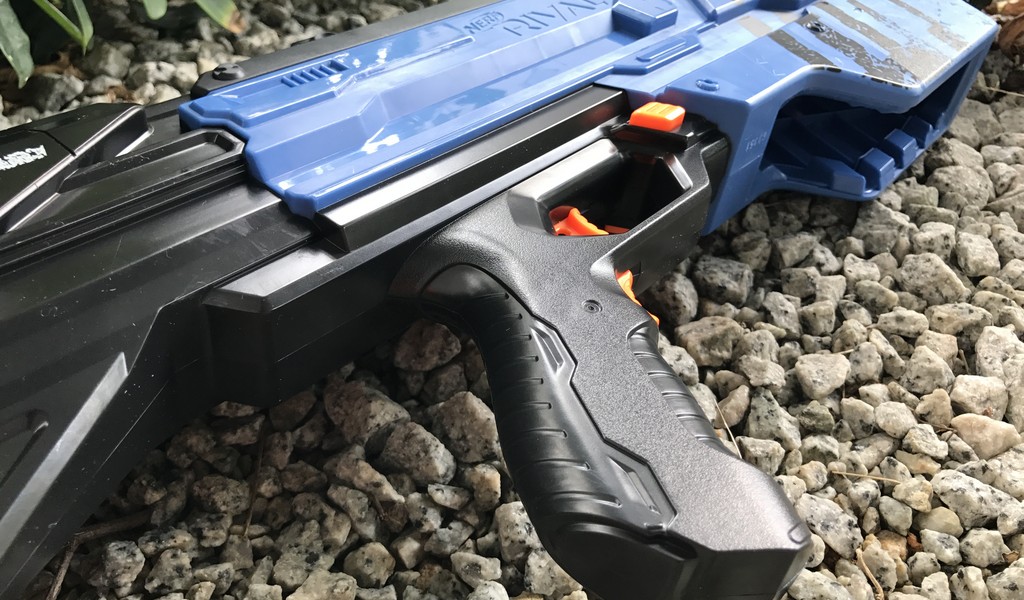 The blaster comes with a safety button to prevent misfires, as well as a ready indicator at the rear, to let you know if it has been cocked. However, do remember that the cocking handle must be placed at the front position, before the blaster will fire. This set also comes with a Rival face mask that protects the eyes, as well as the mouth. This mask is actually pretty large, and the rubberised bands that hold it around your head are wide enough to fit adults as well. 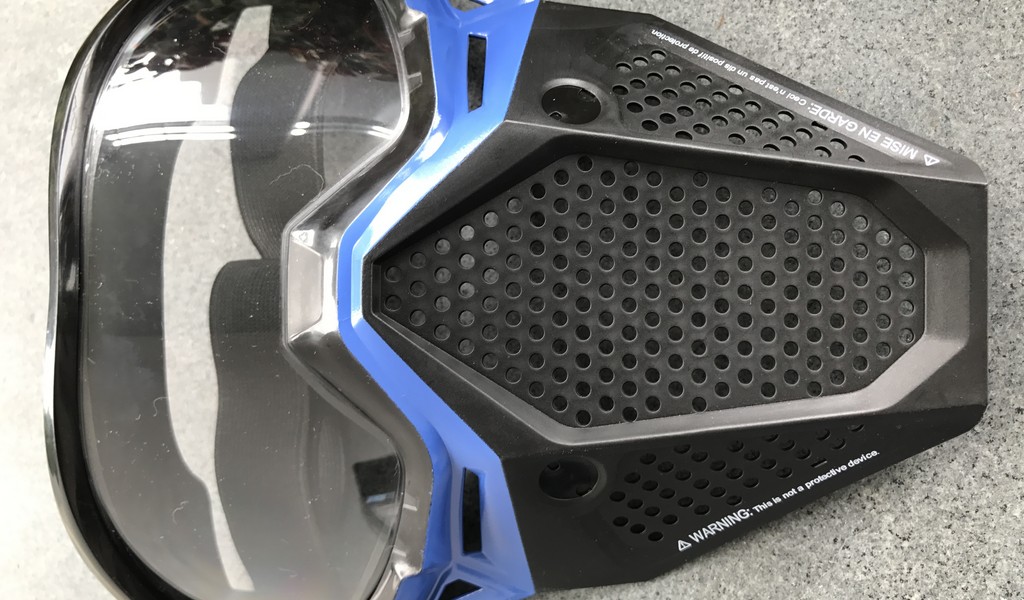 The evolution of foam warfare is not with discs, but with new foam and a new shape. The Apollo shows that the Rival series is off to a great start. And if you ever want to win in a face-off, go for the balls of foam.