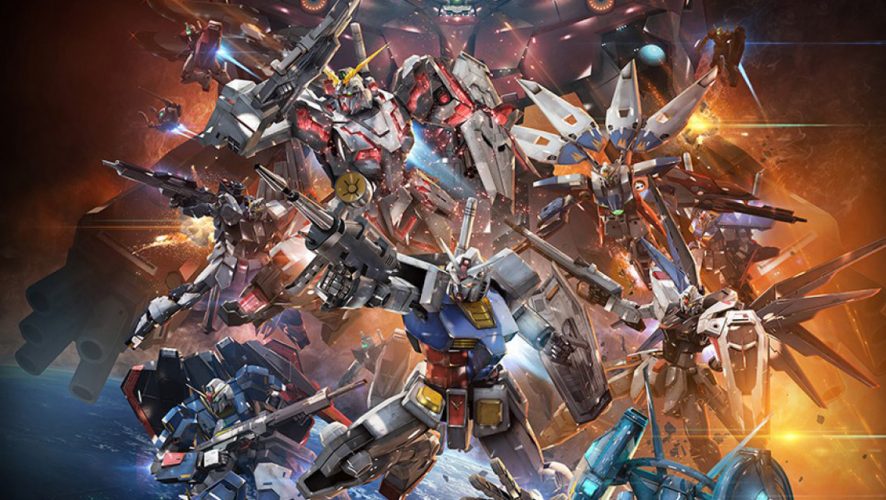 Gundam fans outside of Japan can now rejoice in knowing that they can play the English version of Gundam Extreme VS Force exclusively on the PS Vita portable console.  This means that there is no need for players to find a translation guide to decipher the Japanese menus or tweak the game, and to read up the story line after completing a mission. The localization, by Bandai Namco Entertainment Singapore, is only for the text and menus though, so the dialogue remains in Japanese, preserving the feel of playing a Japanese anime game.

Nevertheless, here’s a shout out to the Singapore team at Bandai Namco Entertainment for making this English version of Gundam Extreme VS Force possible! 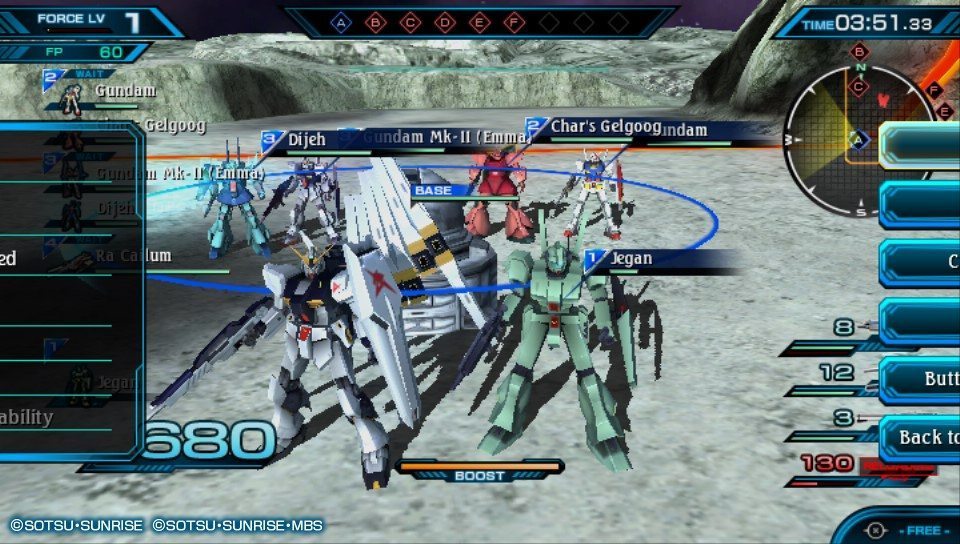 A word of warning to fans of the series – there is no other single player mode besides the campaign. To be honest, I was expecting a free play mode where I could set up dream matches, or form a team using my favorite mobile suits, to brawl with the enemy AI.

Hopefully this mode will appear later on, maybe as a reward for completing the story mode, or even as a future DLC. Luckily, the game supports multiplayer mode and players can still duke it out with each other. 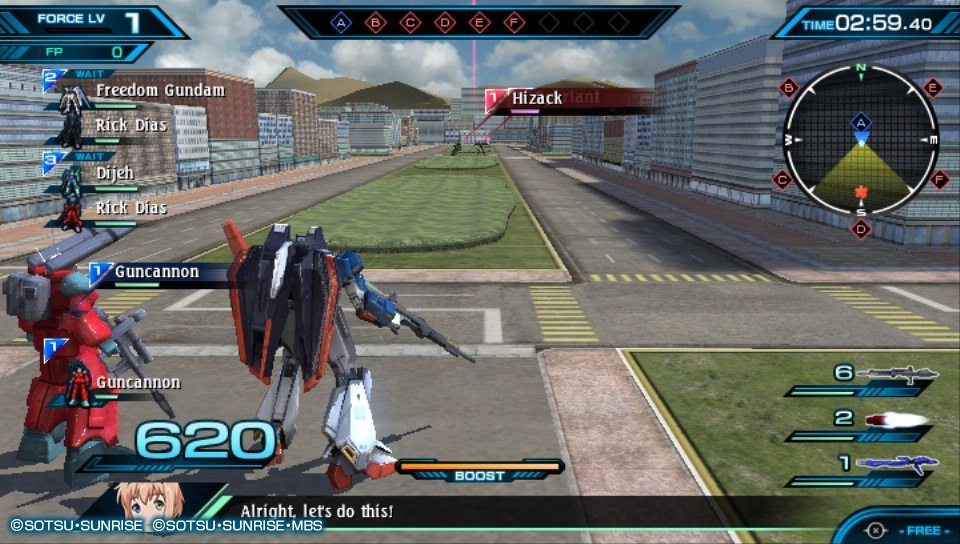 The single player campaign for Gundam Extreme VS Force offers a pretty good variety of missions. In my campaign, I encountered skirmishes, battleship escort, defend the base and conquest type of missions. The game controls its difficulty by assigning players optional objectives to complete. One thing I liked about the game is that some level of strategy is involved, especially now that you can give orders to both your battleship and allied squad mobile suits from a menu. 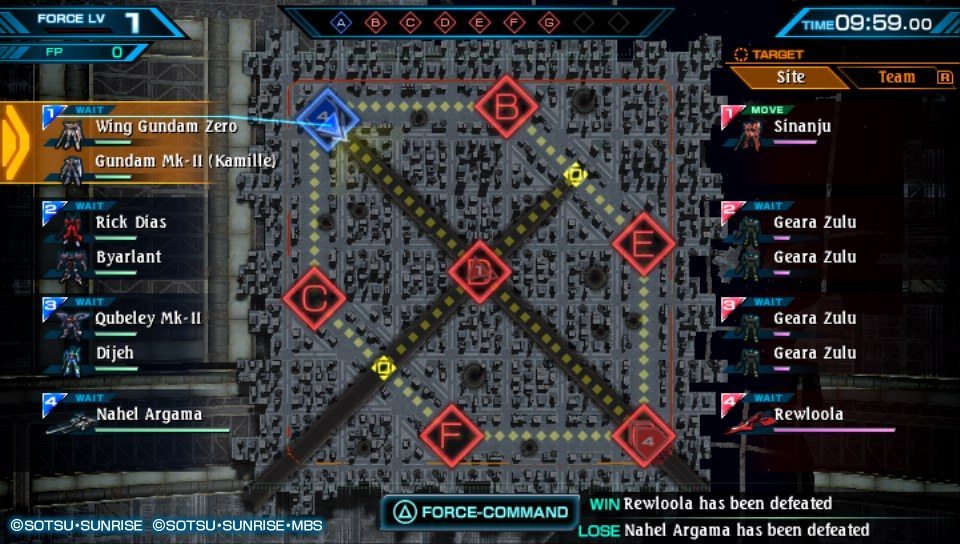 This presented many different strategies to complete each mission. I had the option to leave my battleship to be defended by the base while I went on the offensive, to fight waves of enemies to try to destroy the enemy’s battleship. Or I could command the battleship to follow me and provide cover fire, but end up exposing it and the base to enemy fire.

Destroying enemy units will also give you force points, which players can use to trigger different force-commands, to change the tide of the battle. Since this is a game designed for a portable console, each mission is quite short, with each mission lasting no more than 10 minutes. Sometimes, the game even rewards players for clearing a level within a time limit.

Overall, the controls feel tight and responsive, and the game tests your reflexes by making you dodge enemy fire and counter attacking. Both the analogue stick and d-pad are supported, but the D-pad gives more precise directional control of the mobile suit. The designs are not just skins though, as each mobile suit is differentiated by armor and movement speed, and by their different load out of weapons. Although there is a sizable list of mobile suits featured, not all mobile suits from the Gundam Universe are available and I’m hoping that some fan-favorite mobile suits, such as those from Endless Waltz, can be purchased as a DLC later on.

READ ALSO:  Geek's Guide To The Best Deals From The Lazada Mid-Year Festival On 18 - 25 June 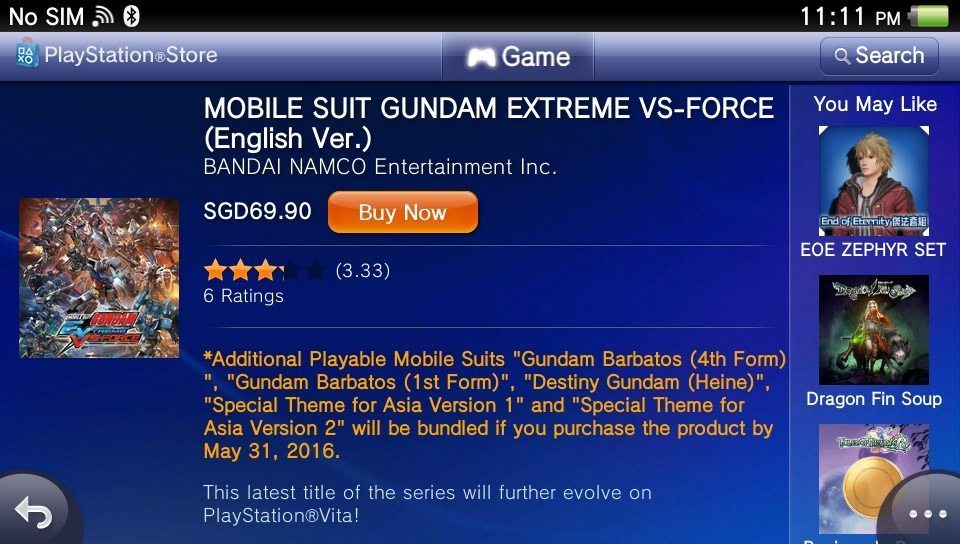 As a bonus, those who purchase the game by 31 May, 2016 will receive a few bonus DLCs in the form of playable suits including Destiny Gundam (Heine), to enhance the gaming experience.

Gundam Extreme VS Force is a fast paced game with responsive controls, offering game mechanics that are both deep and engaging.  The story mode has a good variety of missions, and Gundam fans will enjoy piloting the large selection of mobile suits from the various Gundam series. Bandai Namco Entertainment Singapore did a great job with translating the text, allowing players to fully immerse themselves in the game.

My only wish is a free play mode, to enhance re-playability of the game. Still this is a game to treasure and hopefully, a sign of more translated Gundam games from Bandai Namco in future.

Gundam Extreme VS Force is a fast paced game with responsive controls, offering game mechanics that are both deep and engaging. The story mode has a good variety of missions, and Gundam fans will enjoy piloting the large selection of mobile suits from the various Gundam series.

Getting first dibs in the Southeast Asia region.