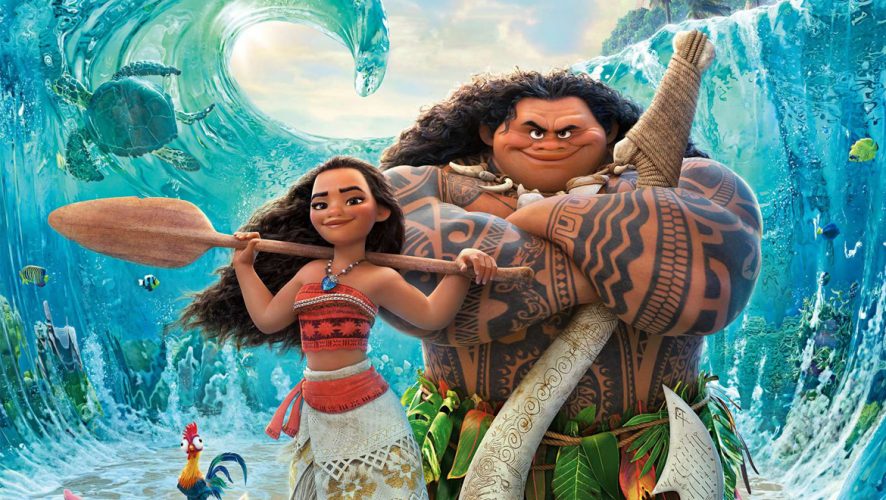 Moana exists to prove that Disney Animation Studios does not need a familiar setting of European castles to pull it off their brand of awesomeness that we’ve seen with, most recently, Zootopia.

Really? Two awesome movies from the same place within the span of a year? It looks like anything that Disney Animation Studios touches at this point of time turns into gold. You know that the studio is doing well when they are able to sneak in more references of their past work into the movie as easter eggs. The studio is on hot streak and Moana looks to be another cap in their feather with breathtaking visuals and a story that anyone can enjoy.

If studios like to show off their technology by showing off how life-like things like hair and water, Moana must be the best in class example. It seems as though every scene in the movie has a deliberate attempt to flex their animation muscle and the tropical setting gives them the perfect excuse to do so. As the water glitters in the horizon like diamonds, I’d say it’s actually particularly challenging considering the movie is not extremely stylized and not as bleak as snow covered Frozen for a large part of the movie.

A word of advice – the movie is best enjoyed with an empty bladder because the movie’s setting is based around the ocean the urge to rush out of the cinema would be great as I found out the hard way.

We follow the adventures of Moana (Auli’i Cravalho) who has a connection to ocean since young and is destined to lead her people from impending doom. Keeping her out of harm’s way falls upon the shoulders of Maui (Dwayne Johnson) who shares a great chemistry with Moana despite being in animated form. There’s a strong connection between the two adventurers as we follow their journey across the ocean to return the Heart of Te Fiti to its rightful place and set the world back into balance.

As with most movies in this vein, the real plot lies within our main characters as we witness their development throughout the course of the show. The takeaway here would be that even demigods in the form of the legendary Maui can go into a funk and that it can even take a human to set him back on track. We constantly see Moana and Maui playing off each other and uplifting their spirits when the going gets tough through the course of their adventure. If you’ve ever had a best friend in the office, this is probably what it probably looks like on screen.

One would think that with an individual like Dwayne Johnson (The Rock if you’re not aware) might overshadow the efforts of Moana with his character presence but it’s not the case in this instance. Perhaps it might stem from all his years in the ring, Johnson is able to elevate himself and Cravalho’s characters to the next level giving them a greater “sell” overall with most of the laughs originating from his character.

While the chemistry between both characters is great, the overall danger that they find themselves thrust in were lacking in tension for the most part of the show. Both Moana and Maui never really found themselves in any real trouble at all. The greater the reward, the greater the danger does not apply here. The movie does feel like a video game on easy mode as Maui is a cheat code made man that gets everyone out of a jam too easily.

With Moana, we see the Hero’s Journey wrapped in a different shell. And while it’s formulaic, Disney still is able to make the entire experience an enjoyable one. The movie is a definite hit with the kids while the adults could use a bit more love this time round. It’s a high bar that the studio has set itself and, thankfully, Moana still is able to keep to those standards.

Disney’s latest princess shows that you can do wonders with the powers of self belief. Something that we all need at some point in our lives. Having a BFF certainly helps as well.