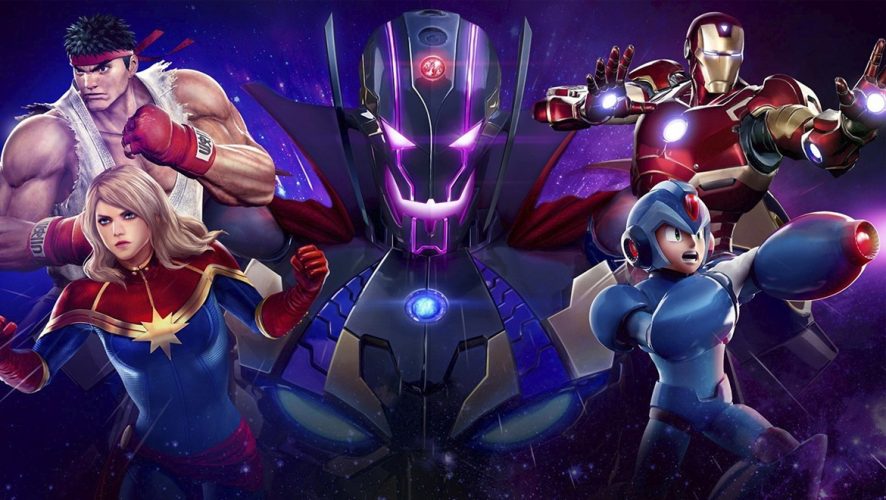 “Your daughter will thank me for this.” – Strider to Thanos

If you’ve been following Capcom vs Marvel: Infinite since its reveal, you know the fighting game community has been pretty sceptical about the latest release in the Vs. series. From the worry that it was going to be another Street Fighter V with a bare bones release to the quite horrendous look of the game and the fact that the Marvel characters were from the Marvel Disney Cinematic Universe and not the comics (so no Wolverine, X-Men etc) fans were generally concerned. Were they right? Yes and no.

The Marvel vs Capcom series has always stood out from other fighters due to the blink and you’ll miss it speed of the game and nothing has changed in the latest instalment. Fighters tag in and out and combos come thick and fast and it could be game over before you really know what the heck just happened. So what has changed? Gone is the 3 vs 3 which is replaced by a 2 vs 2 setup (which harks back to the original Marvel vs Capcom game) and the third character is replaced by one of the six Infinity Stones which acts as an ability. More on those later..

The game is definitely aimed at newcomers to the series and fighting games in general as out of the box there are three options that pro players will want to turn off to get most out of the game. To aid these new players, you can auto combo by just spamming the light punch button. You will still need to learn to combo out of this but you can definitely impress your friends with some cool combos with a few taps of a button. There is also a auto hyper combo and a auto super jump. These aids are available in all game modes including online. That doesn’t mean a bunch of noobs are gonna rock the online world as you still need to learn how to block and string combos! 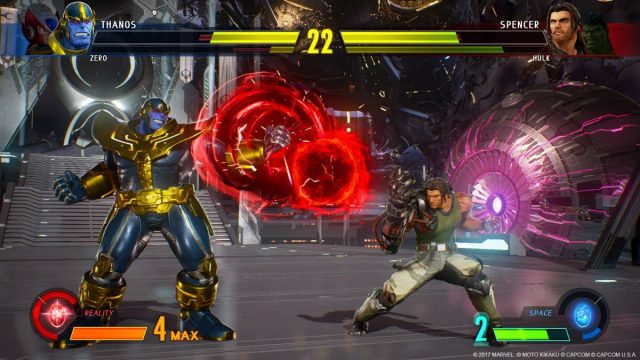 The rest of the game mechanics are similar to the previous entries in the series but as mentioned before, the Infinity Stones are a brand spanking new mechanic to get to grips with. These stones grant the player powerful abilities than can be used once the Infinity Stone bar fills up. Each one is different so for example The Power Stone knocks enemies back while the Time Stone will teleport you forward a short distance. When used correctly these abilities can change the fight dramatically and as you use them it charges up a new meter. When it fills to at least half full, you can activate the Infinity Surge. This will give you special powers that last until the meter depletes. So for example, the Space Stone will trap the enemy player in a transparent blue cube, while the Mind Stone will help you quickly refill your Super meter so you can unleash it again.

Street Fighter V was lambasted for not including a story mode on release, so Marvel vs Capcom: Infinite has wisely included one but the end results are a bit of a hit and miss. For a start it’s only a couple of hours long. Not a biggie as nobody want to play a fifteen hour story mode in a fighting game. But it pales in comparison to what Injustice 2 and Mortal Kombat have done. The story is fun and cheesy but at the same time seems forced. It is cool to see these characters share the screen though. So what’s it about?

The story sees Ultron (Avengers villain) and Sigma (big bad from Mega Man X) literally joining forces to form one super big bad. The level designs are also fantastic as it combines the best of both worlds. So early on in the story, Asgard is in a state of flux and is mixed with the highway level from Mega Man X. It’s a very neat idea and visually well represented in the game. Once the story is over you will probably not remember what and why things happened but at the end of the day, the story mode eases you into the game by teaching you moves, blocks and combos. By the end you will have a rough idea on the characters you like and don’t really like. 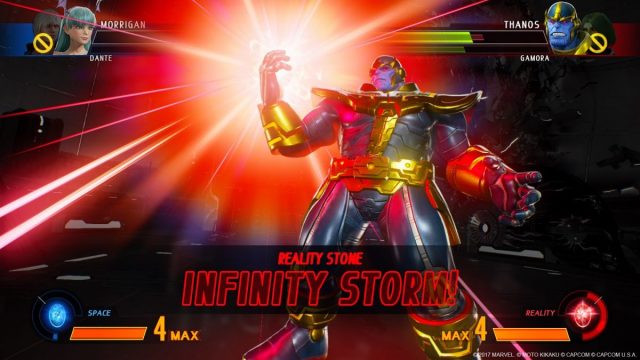 The other strike against the game is the look. After the beautiful comic book design of the previous game, Infinite just looks…weird. It’s not an ugly game at any stretch but the character design is at odds with the what the game is. Gone are the comic book and game designs of the characters and in comes a weird ‘lets make them look real’ kind of design. Couple this with boring menus and HUD and Marvel vs Capcom: Infinite is relegated to being drab when it shouldn’t!

Marvel vs Capcom: Infinite launches with 30 playable characters, 15 Marvel and 15 Capcom.  The roster size is respectable in this day and age of DLC but doesn’t come close to the 56 characters that launched with Marvel vs Capcom 2. As mentioned before, a lot of the well known Marvel characters are missing due to movie licensing. However, there are plenty of Capcom characters missing too which is disappointing. When you really look into the roster, you realise that out of the 30 characters present, only 5 of them are making their debut in the series. The other 6 new characters are coming as DLC (sigh) and unlike Street Fighter V where you can buy new characters with in game currency, Infinite sadly does’t have this feature. It’s real money all the way on this one.

Were the sceptics right to worry about Marvel vs Capcom: Infinite? Yes. The roster is small. The game doesn’t look that great. However, it plays fantastic and that there is the most important thing. It hasn’t lost anything in terms of gameplay it has only lost its looks and roster count. Will it survive the esports circuit? Who knows. It’s fun, fast and offers a great fighting experience and that is all you can ask for.

Marvel vs Capcom: Infinite was reviewed on a PlayStation 4 Pro. It is out now for PS4, Xbox One and PC.

Lacking in looks and roster count, Infinite makes up for it in the fighting department. Fast, fluid and very chaotic! Who doesn’t want to see Rocket Raccoon fighting Ryu or Chun-Li! 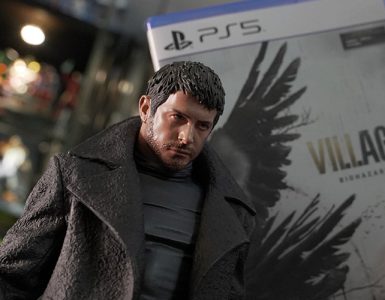 Time to add a Chris Redfield figure to your collection! 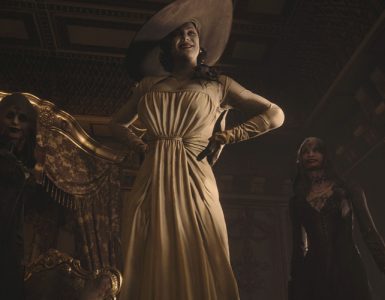 Unlimited gameplay demo for the win.