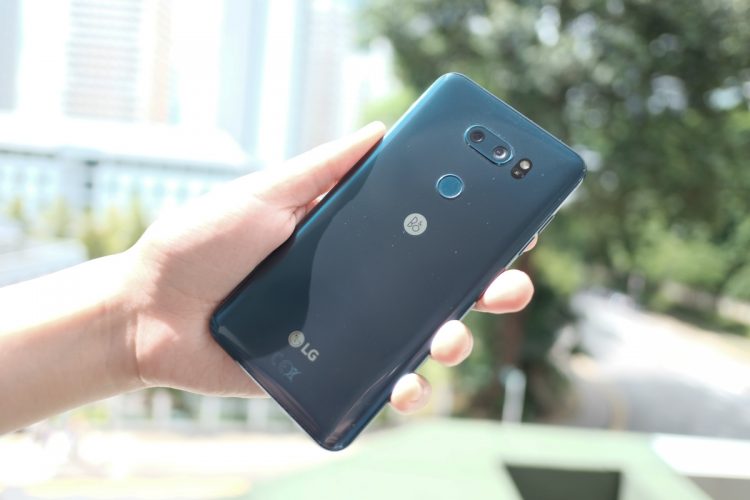 When it comes to handset makers, there’s never too much of a good thing. Samsung has its Galaxy S and the subsequent Galaxy Note series, Huawei has its P and the later Mate series, while LG has its G series, and the year-end V series.

The idea of having two, distinct flagship phones for the year, each catering to different demographics, is also to ensure that no phone maker maintains a top end device for more 6 months without a refresh. Having reviewed the LG V10 and V20 before, the expectation would be for the latest flagship’s flagship to stand out from the crowd, and the V30+ does not disappoint.

The difference between the V30 and V30+, the latter has 128GB of internal storage. The rest of the internals are the same.

With the V30+, LG has gone along with current mobile design trends, and introduced a glass rear to their latest iteration, and the 6-inch V30+ looks stunning, with the Moroccan Blue review unit a definite head turner.

Compared to the V20, the next biggest change here with the V30+ would be the removal of the much trumpeted second screen located at the top of the device. While it was a nice feature to have even before the advent of always on displays, the second screen wasn’t the most killer feature the V series phones had on their plate.

Despite launching so late into 2017, the LG V30+ does not come with the latest version of Android 8.0, which is a stark contrast to the previous iterations of the V series. This is interesting to note considering how LG has really close ties with Google. 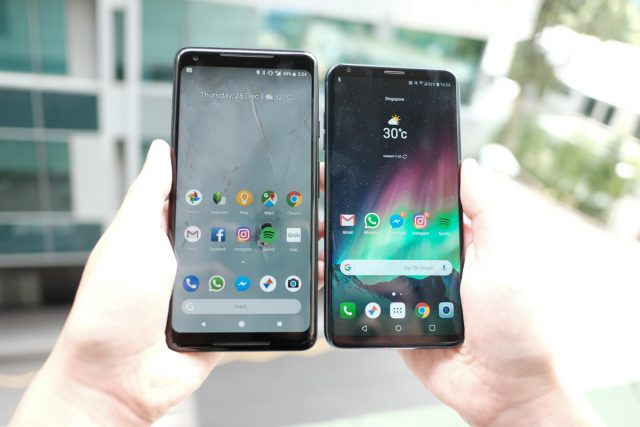 With the V30+, LG has been placed in quite a unique position. As much as Google tries to downplay its hardware partners, LG is also responsible for the recently released Google Pixel 2 XL, and not surprisingly, both phones have plenty of similarities – both are 6-inch devices offering 2,880 x 1,440 pixel resolution, with the now common 18:9/2:1 aspect ratio. They are seem to be using the same OLED pane, as well as DCI-P3 color gamut support. 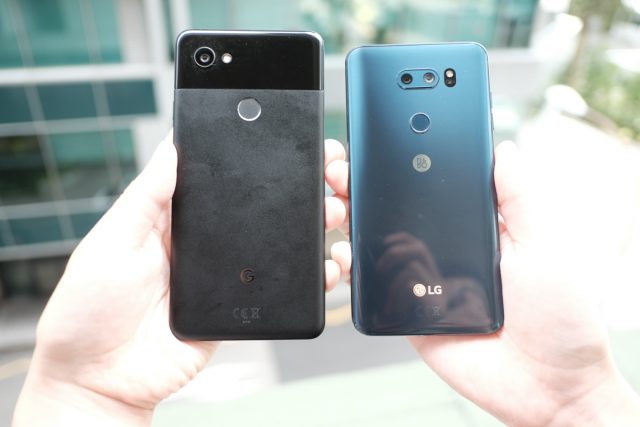 Under the hood, both phones are equipped with a Snapdragon 835 and 4GB of RAM. There’s also the placement of the rear biometric sensor. The V30+ has a 3300mAh battery and comes with IP68 resistance, while the Pixel 2 XL has a 3520mAh battery.

On top of this, LG has stuck to what has worked for them and continued to provide users with the option of expandable memory and a dual sim option. Having handled both the Google Pixel 2 XL and LG V30+ at length, it is quite illuminating to see how both brands worked off similar hardware, and applied their own software philosophy to each device.

The V30+ is armed with two cameras, one 16MP sensor with a wide-angle lens, and a 13MP sensor with an extra wide-angle lens. This gives users much more options especially if they are thinking of making the V30+ their ultimate content creation device, given the increased emphasis of video on social media. While versatility is the edge that the V30+ has over the Pixel 2 XL, the image quality for stills does look better on the Google Pixel 2 XL. Yes, all for it’s impressiveness on paper in terms of features, mobile phone photography needs good software to complement the hardware side of things. This is especially impressive considering that the Pixel 2 XL only has a single lens and leaves the rest to software for the rest of the heavy lifting.

Here’s how they look like side by side, Pixel 2 XL shots on the left and LG V30+ on the right. 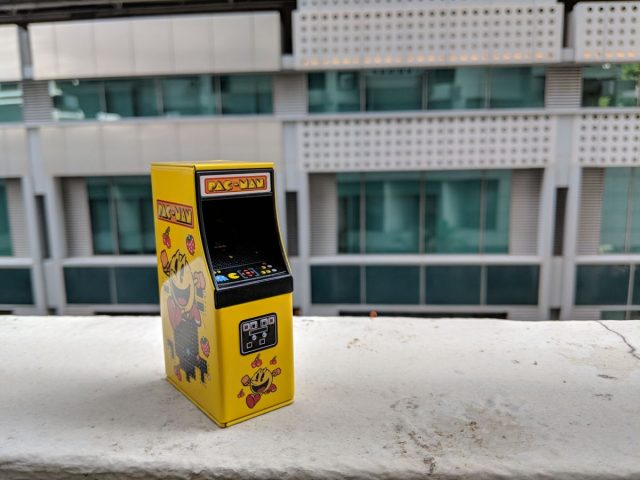 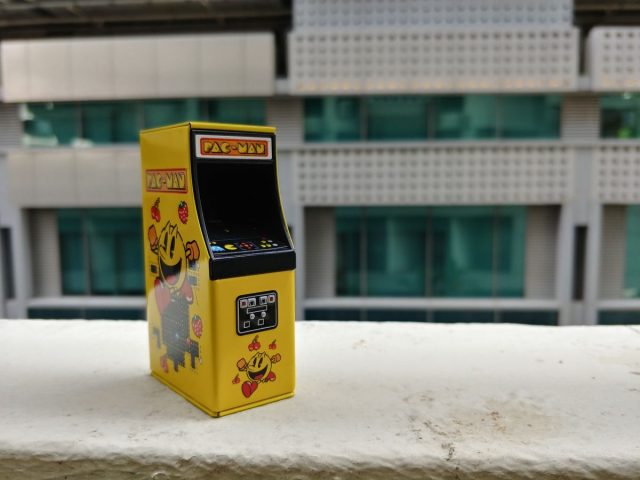 However, this is the only obvious ace Google has up its sleeve compared to the V30+. And maybe unlimited full resolution Google Photo uploads.

It really boils down to what type of shots users might see themselves taking with their phones. If you’re looking for everything and the kitchen sink, the LG V30+ is ideal for all sorts of scenarios that you probably didn’t think of until now. In working with Google, LG has wisely kept all the additional bells and whistles that made the LG G6’s camera such a joy to shoot on. 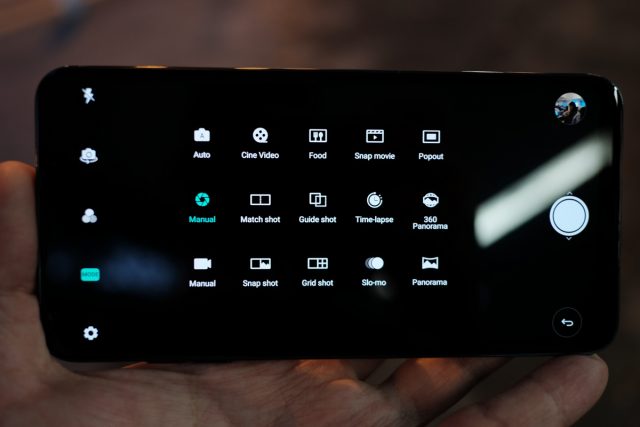 LG has continued to pack in all the features we have enjoyed from the G6 and, once again, gone the extra mile to define what the “V” in V30+ stands for with it’s new Cine Video Mode. While it offers defined visual profiles and handy tools to help users capture the best possible shot, proper scripting and external editing software are still essential complements to the process. After all, capturing top quality footage is only but one part of the process, it’ll still be far easier to edit on a desktop as compared to a mobile phone screen. 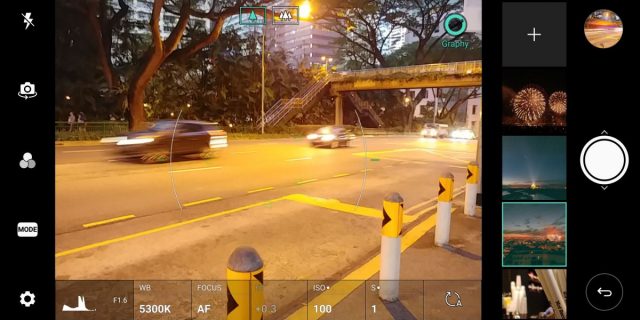 Full on camera manual mode is still in here as well, with the addition of quick profiles to help users adjust ISO, white balance and shutter speed to quickly match the scene in real time. If you’re a first time manual mode user, these profiles are a great help in helping you figure how which settings are best for the scene in front of you. Contrast this to the Google Pixel 2 XL’s camera app and you start to really wonder if Google made a phone solely to attract Apple users. In this aspect, we have to give props to Google’s camera and how it excels at stills. LG, on the other hand, goes all out to to attract everyone else within the Android ecosystem to check them out.

The Pixel 2 XL received quite a bit of flak for its display prior to a software update despite having the same panel as the V30+, but both displays are different where it matters, and the shift in vibrancy in visuals is stark. While I do appreciate the more muted tone of how the Pixel 2 XL display works, consumers will probably feel more at home with LG’s display calibration.

Blacks do look better on the Pixel 2 XL, but it’s in the colours where the V30+ clearly shines. Being able not to worry if photos shot on the V30+ are overly post processed for social media is always a good thing. What you see is really what you get on other mobile devices, something that might not have been the case with the Pixel 2 XL.

Display wise, the LG V30+ is a joy to look at and it makes us wonder if Google has the right people working on eking out the best from similar hardware. Does the blue shift plague the LG V30+ as well? Alas, it is also here, but just a little bit, and it’s not a big deal considering you hardly view a phone from the side. This is simply a case of finding problems when there are really none in day to day use. 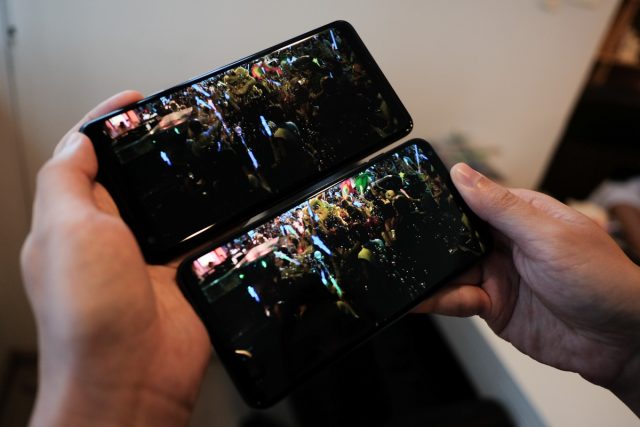 The biggest defining aspect of the LG V30+ boils down to how we increasingly consume media on our mobile devices. With its support for Netflix’s HDR content right out of the box, the V30+ is the champion between both devices. Placed side by side to compare content from each device, the LG V30+ cleans the house handily when compared to the Pixel 2 XL. It’s the small things that LG is able to afford to help their users gain a better overall experience when using their devices. And if you’re the type that enjoys to watch Netflix while on the go, the LG V30+ is perfect for your needs. Using Iron Fist’s Chinatown scene above, you’d notice that the colours on the V30+ look better compared to the Pixel 2 XL. It would seem that as long as Netflix and LG are good partners in the content and hardware front, it’s hard not to recommend their pairing if Netflix is the main source of your media consumption on the go.

Without having to accommodate front facing speakers has allowed the V30+ to have a smaller profile and includes a headphone jack as well. Bundled with B&O earphones together and high-res audio out of the box, the V30+ is the ideal option for commuting and your fellow commuters will thank you as well. Combine this with in-built Hi-Fi Quad DAC, LG has given users all the resources to make full use of possibly the best sound set up for a mobile phone right out of the box.

The one thing that LG realized is how important is it to pack as much features into their phones to stand out from the crowd. While Google seems to take a more refined approach ala Apple in giving their users the best possible experience without placing in too much bloat, such an approach might sit well with folks who are switching ecosystems but not existing Android users.

The LG V30+ and Pixel 2 XL has given us a good insight into how software on Android’s top end flagships matter more than the actual hardware itself. Given that LG’s V30+ is more readily available in Singapore as compared to the Google Pixel 2 XL, the recommendation is simple. Between both devices, the LG V30+ would be our pick considering it’s far more consumer friendly than its hardware twin. Plus, the LG V30+’s full range of options available to power users in the camera department is a big step up over what the Google Pixel 2 XL provides right out of the box. If you’re looking to maximise what a mobile phone can do for you, look no further than the LG V30+.

Priced in at S$1098, the LG V30+ is the Android device for the power user but does the release cycle make it too late with Mobile World Congress just round the corner? LG might want to consider shifting the release windows a little to ride the new year wave.