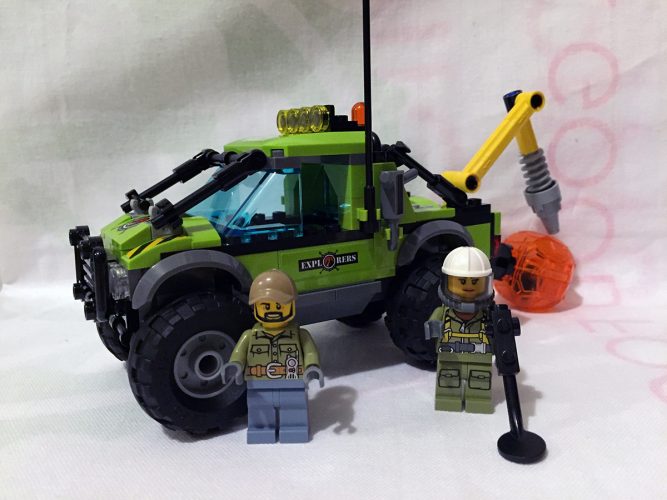 This is a smaller Volcano Explorers set that features just one build, but it’s a very nice build. A 4×4 truck with an attached drill and two minifigures: a male to drive the truck and a female to look for lava rocks with a pretty great metal detector-looking tool piece. That metal detector piece is actually quite awesome, and we’ll come back to it later.

As with most of the sets in the Volcano Explorer subtheme, this exploration truck can easily be repurposed for other imaginative play. I myself immediately put some criminal minifigures in the truck and started to vroom-vroom across my living room in an effort to escape Batman on his Batcycle and Nick Fury in a flying SHIELD car.

As in my previous review, I got some of my blue collar minifigures to help me build the set. Since this was just the truck, however, I mostly got my two mechanics, Pepe and Kenickie, to do all the work.

The box before all the goodies came out.

I was surprised this was a two-bag build, but I quickly realized just how detailed this truck actually was.

Brian the bulldozer driver and Sarah the grabbing crane driver get the pieces together in one pile. Emmet the Master Builder and Kevin the contractor call out the instructions, as usual.

Pepe and Kenickie get started on the chassis of the car.

The truck begins to take shape under Pepe and Kenickie’s expert wrenching.

Kenickie gets the back hook in place while Pepe continues working on the chassis and Felicia comes in to quickly paint in some detail.

Pepe and Kenickie take a break to pose with their work so far.

Brian and Sarah get the second bag pieces together so that Pepe and Kenickie can start work right away. Once again, Emmet and Kevin call out the instructions.

Never one to turn down a well-paying job, William starts welding in the back windows.

William welds some emergency lights on the top while Kenickie starts working on what will soon be the ceiling of the cab.

Pepe puts up the back roll cage while William welds in the front windows.

Pepe and Kenickie start working on the undercarriage, while Felicia paints in some details on the hood.

William welds in some powerful high-beams at the top of the cab, in case our explorers every find themselves in a very dark cave.

Kenickie puts in the front roll cage. These roll cages are quite important. If the truck ever flips over, the roll cages help to protect the driver inside.

Pepe puts in some final work on the drill while Felicia paints in the last details on this truck; namely, it’s call number.

Pepe and Kenickie finally put in the wheels, ad finish working on the engine.

The exploration truck is finished, and the two minifigs stand in front, thankful they can now go do their jobs.

I really like this truck. It’s an excellent vehicle that will fit into any kind of imaginative play. From racing to secret agents to exploration to superheroes. You can even remove the drill in the back fairly easily and just drive the truck around in your city sets as someone’s gas guzzler.

But if you do want to use the truck as it was intended, then that drill comes in real handy to get at them crystals.

This is a very fun build with lots of play opportunities, especially when used as “just” a truck. One final note: in the introduction, I mentioned the metal detector tool piece the female explorer comes with. It’s a versatile piece that can be used with a beach minifig as a metal detector, with a scientist as some kind of radioactivity detector, with a soldier minifig as a mine detector, and with a supervillain minifigure as some kind of weapon. And these are just off the top of my head.

The detector piece plus the awesome truck it comes with is a great buy when you’re looking for an affordable reward for your kids (or yourself) that will allow for hours and hours of gameplay.