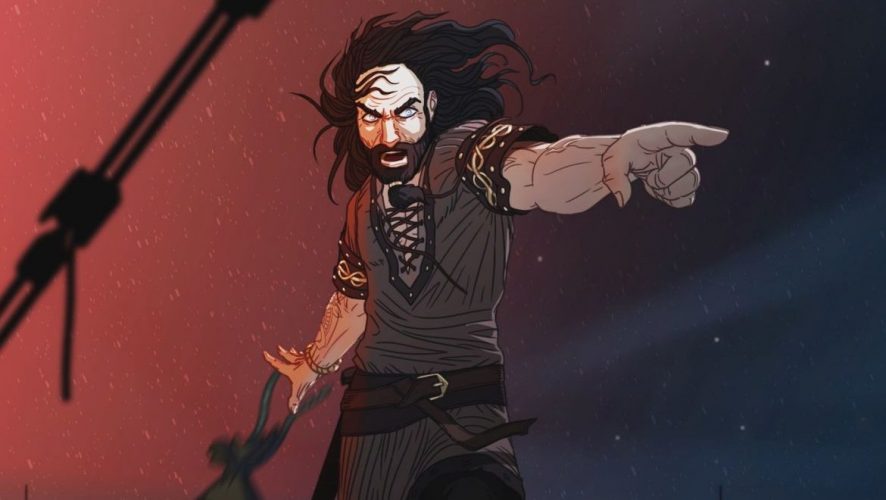 A survival/management game, mixed with some role-playing and adventure elements, Dead in Vinland follows a family trying to survive on a mysterious island.

Day 15. It’s a bright, sunny day, and the camp’s running dry on water. Around the camp, the inhabitants carry out their assigned responsibilities; the harvesting of berries in the field, and the cooking of raw meat over a fire pit. 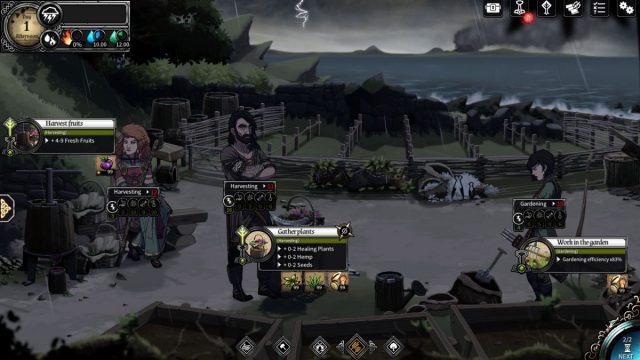 A turn passes, and the scorching heat beats down hard on the characters. Tiredness sets deep in their bones. The exhaustion metre rises more than usual, and – oh snap, one of the core characters has succumbed to overworking.

Players are going to let out a sigh, go back to the last save point, and try to reshuffle everything around so the characters can do what they’re supposed to: survive. Many. Times. Over.

But when there’s a community of six to manage, it can be an extremely difficult and arduous task, especially since Dead in Vinland goes beyond the typical, run-of-the-mill survivor game. The second of French indie developer CCCP’s Dead in… series, the title retains the same resource management system as its predecessor, Dead in Bermuda, with the Viking era taking over the modern timeline, and Nordic exiles replacing plane crash survivors. It all begins when a family of four, comprising of Eirik, Blodeuwedd, Moira and Kari, are chased out of their home, only to end up shipwrecked on a hostile island, where a cruel warlord comes every now and then to collect ‘tributes’ (which honestly is just an euphemism for ‘daylight robbery’). 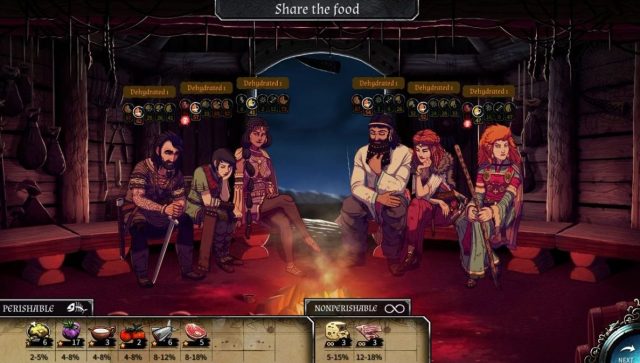 Between keeping the family alive and gathering enough materials for the day of tribute, there’s a lot of thoughtful planning going on. The characters are each attached with several statistics that run the gamut from hunger to exhaustion, all of which require careful attention. Those who get too depressed will hang themselves, those left hungry will starve – it’s this harsh reality that sets Dead in Vinland apart from the other similar titles on the market. 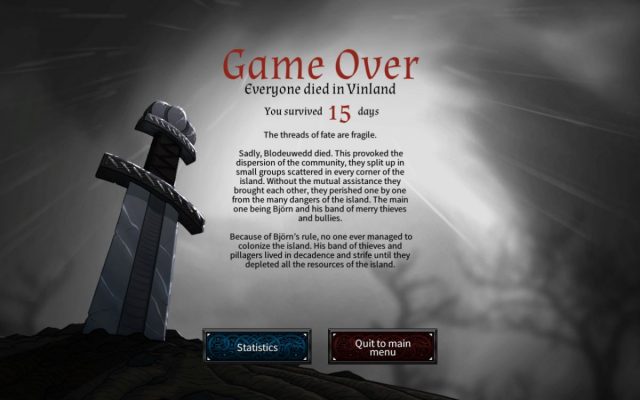 And here’s the kicker: should any of the four members die, it’s a perma-death, and a definite game over. It serves as a good motivating force to carry out the juggling act meticulously, and a huge part of that belongs to assigning the survivors with tasks. With gameplay loop being separated into three phases of morning, afternoon, and evening, the act can only be done in the first two rounds. Chopping wood, collecting water, and exploring the island are the default responsibilities, but more can be done once the workshop is built, allowing for new areas to be set up, such as a harvesting workplace for gathering and juicing fruits, a drying rack to preserve food, or pens for breeding livestock.

This feature comes as a double-edged sword, however; while placing someone at these stations yields important rewards, every action will have a negative impact on at least one of their core stats – hunger, fatigue, injury, depression, and sickness – which will inevitably result in death when any of the metres hits 100. There’s also the challenge of assigning the right tasks to the right individuals, because those less well-versed in a particular area are subjected to harsher effects. 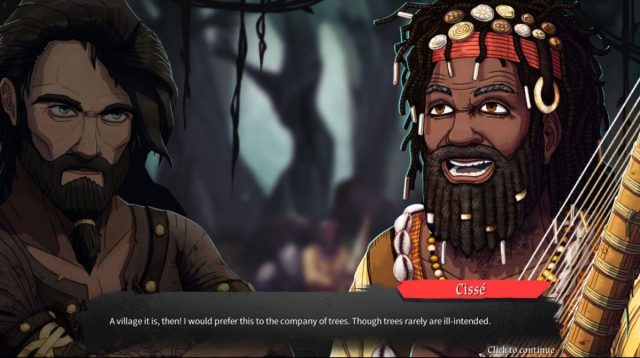 Should the burden becomes too much to bear, there’s always the option to recruit stragglers into the current party, who can be found through exploration. The default limit is capped at six members, but with that comes the extra challenge of having one more mouth to feed, and another fit into the balancing act of work versus rest.

It’s really, truly, a lot of effort, and one’d think that the whole management process stops after the last phase is over. Unfortunately, it continues on, albeit in a way less stressful way: players would just have to allocate their remaining rations (water and food) among the survivors equally. 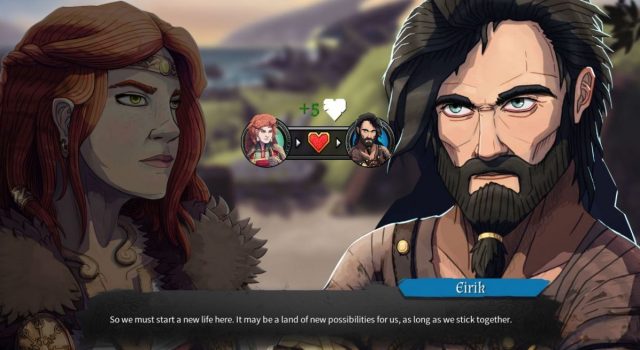 The lull period is also when character interactions take place, giving players a better understanding of their personality and relationships with one another. Sometimes, the game offers different dialogue choices, which can deteriorate or improve the strength of the bond between the survivors. 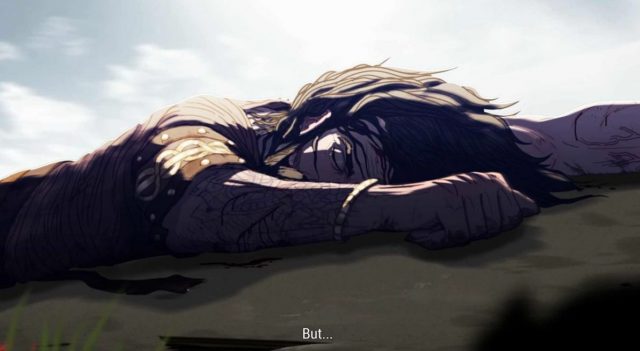 All the grim, depression, and inner intricacies of the game are craftily hidden under pleasing aesthetics. In a style reminiscent to that of The Banner Saga, the colours are notably vibrant at most parts, and toned down where the situation calls for it (the beginning cutscene, for instance), with an overarching design that seems to borrow elements from digital painting.

READ ALSO:  God of War Sequel May Be In The Works Thanks To Mocap Tease

The cheery and bright tone may seem out of place with the gloomy premise of the game, but it actually complements the latter rather well, striking a fine balance between optimism and faith, and despair and hopelessness. Where the design falters is in the user interface – simple details like scroll bars are difficult to discover, blending in too well with the decorative borders. 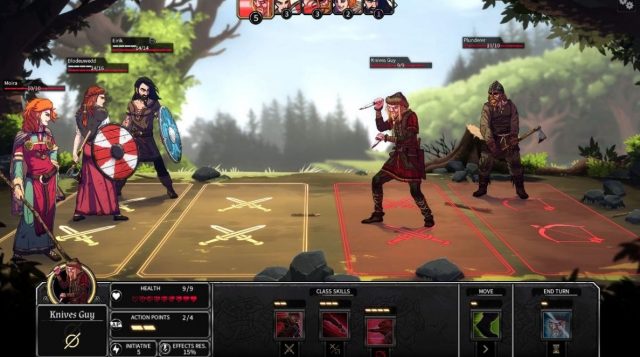 CCCP’s attempt at implementing a JRPG-esque combat system for a different survival gameplay experience is commendable, but it remains one of the biggest weaknesses of Dead in Vinland. The sheer amount of luck that comes with the turn-based, three-on-three mechanic makes battling more frustrating that it’s enjoyable, especially when the opposing troops are repeatedly able to dodge attacks with a supposed 80% accuracy even without buffs; other times, they can land critical shots at 65% accuracy.

That wouldn’t be so much of a problem if combat happened on an occasional basis. However, it’s designed to be part and parcel of the game, and while there’s a chance to lower the chances of encounter through the stealth option via exploring, the great reliance on luck makes the whole experience very repetitive, monotonous, and unsatisfying. 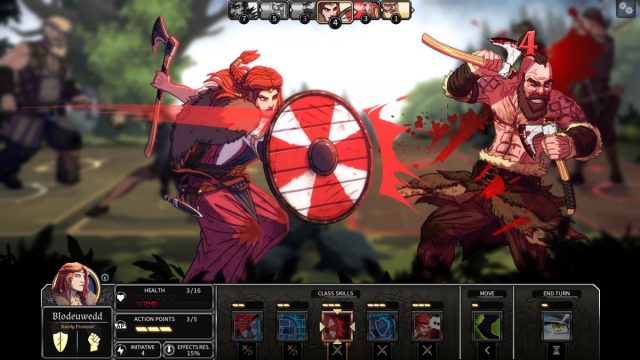 Due to the nature of turn-based mechanics, combat is arduously slow-moving, and not particularly immersive. As such, an auto-battle or fast-forward option would have been welcomed.

Another personal gripe is the weak writing, more so in conversations than the actual game narrative itself. Despite being set in a past setting, the manner of dialogue can be oddly modern at times, and sometimes, the pop culture references used (such as a Rolling Stones lyric at the start) seems forced. In a bid to perhaps lighten up the sombre mood, jokes are planted in between scenes and interactive sessions, but humour is a tricky thing, and there are instances where they fell flat.

On a personal note, though, most of them were rather amusing and well-executed. The brand of dark humour is admittedly not for everyone, however, so those who are uncomfortable with it should tread with caution. 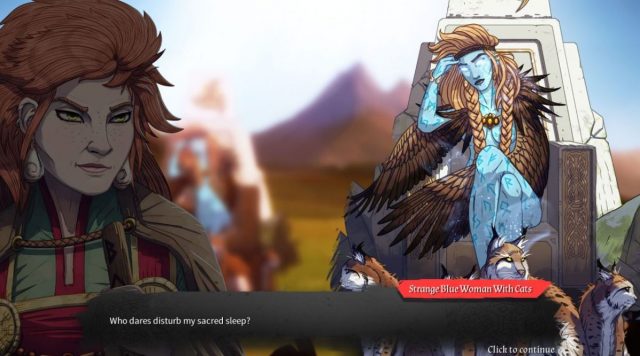 Story-wise, the decision to expand upon Norse lore is carried through fairly well, and the element of exploration works in its favour. Apart from scattered references in conversations (“Odin be praised”), the player will, one way or another, cross paths with a blue-skinned goddess during expeditions, and realise that there’s more Norse at play than the game initially lets on. The cast of characters could have been more fleshed out, but it’s an understandable oversight in lieu of the short gameplay time.

As someone who’s hardly a fan of survival games, Dead in Vinland has been a convincing case in showing that titles of the genre are able to be enjoyed. It has its fair share of frustrations and faults, but there’s no denying the quirky charm that comes with this little game.

Despite the misfortunate that is the combat system – which does mar the overall experience by a fair margin – the game certainly is indicative that survival games look set to have finally, finally escaped from the doldrums. 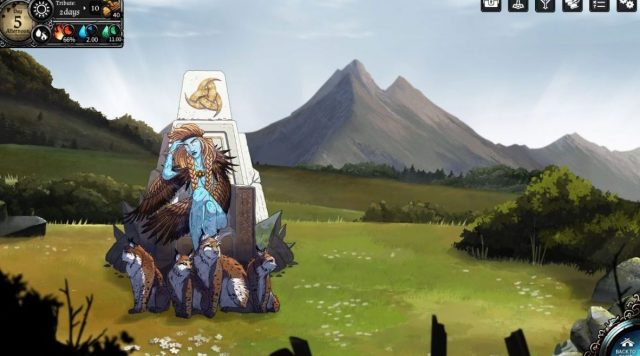 Now if you would excuse me, I have a blue goddess to impress…

Dead in Vinland is available on Steam for Mac, Linux and Windows for S$18.90.

Dead in Vinland is far from perfect. What it is, however, is proof that a well-worn genre can be revitalised through the addition of new elements – which CCCP has executed well, if a little overdone. A nice territory for newcomers to explore, and a new experience for the veterans of the survival genre.