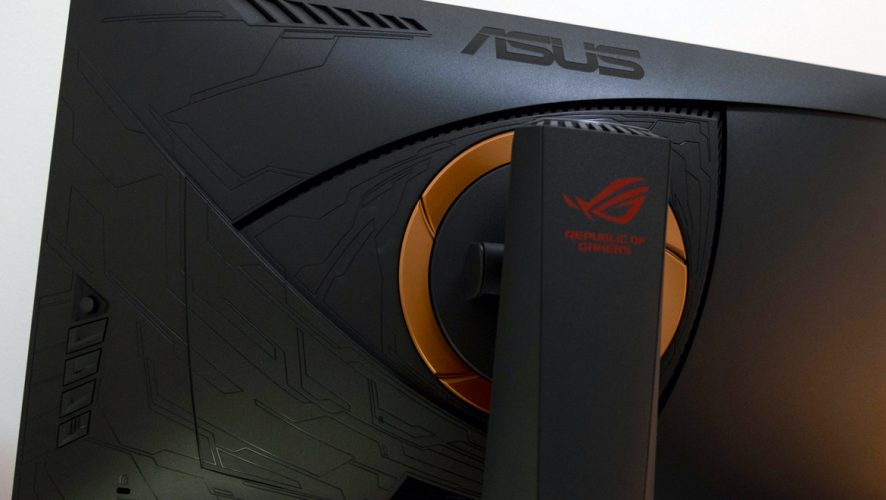 I consider myself a hardcore noob gamer. On average, I play around eight hours a day but I’m not nearly good enough to compete on a professional level. One might think those hours would have given me some mad skills, yet I still get pubstomped regularly.

In other words: I love playing games but I stink at them.

That was why I jumped at the chance to review the ASUS PG258Q gaming monitor. Apart from the fact that I was a hardcore gaming monitor virgin, I was secretly hoping in the darkest, most secret corner of my heart that my gaming woes came from subpar equipment. Harbouring the hope that I’m actually very skilled indeed, I was telling myself I just needed the right equipment to be able to unleash my True Potential. 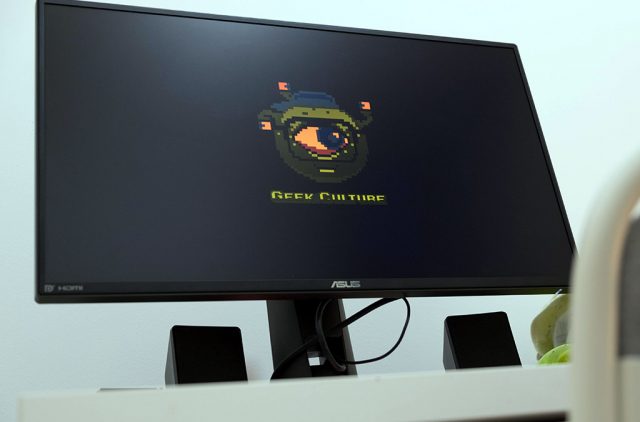 I am not a particularly big fan of oversaturated lights and curvy ergonomics. As a result, I quite enjoyed the ASUS PG258Q’s rather nondescript front screen face. The borders are subtly rounded with pleasantly even edges. The monitor sports a triangular theme from the back of the screen to the base. It’s a little gaudy to me, but considering how it could have been worse when you look at other over-the-top gaming monitors, the ASUS PG258Q is actually quite tame. 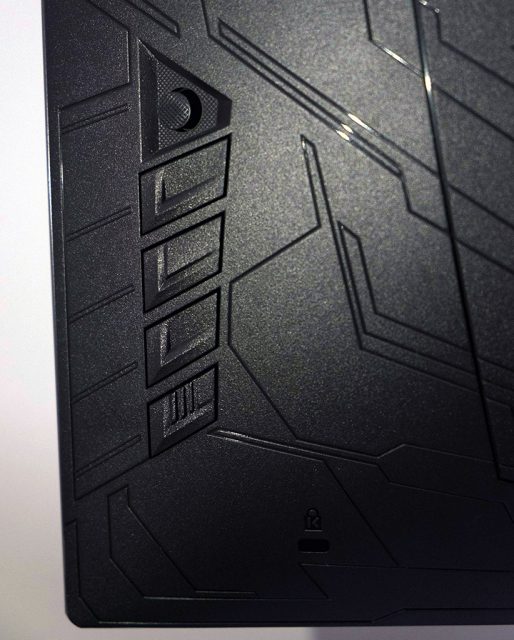 The base takes up way too much space, seemingly sacrificing function for form. The triangular splaying of the thin, bladed legs hogs precious real estate and is not suitable at all for small spaces. I share my table with my hamster, Pipsqueak; and since the monitor entered our lives, Pip’s cage suddenly has a lot less space. 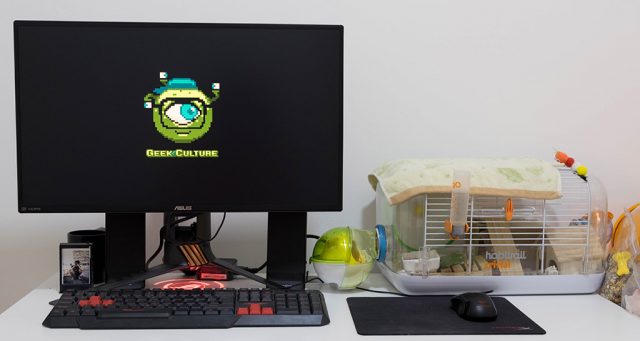 Apart from that, the screen is very flexible, with generous pan and reasonable tilt range. I am a fan of the monitor’s ability to rotate 90 degrees. It’s useful for certain niche tasks, such as coding and designing portrait artworks. This design also makes it very easy to access the cable ports located at the bottom of the screen.

When it comes to sheer performance, the PG258Q is a beast. I was somewhat skeptical over whether I would notice the difference between 60FPS and 144FPS. Heck, I can’t imagine what 240FPS might be like. Unfortunately, the difference is night and day. I say unfortunately because I can no longer live with 60FPS HDMI.

I tested NBA 2K17 and Warframe with the monitor, and I can attest that the 240FPS made an actual objective, statistical impact on my play. 240FPS is a difficult frame rate to achieve and maintain for my Nvidia GTX970, but tweaking some of the settings allowed me to go above the HDMI 60FPS, and boy was it awesome.

My main character on NBA 2K17 is a center playing for the Milwaukee Bucks. He a badass, 7-foot Chinese man named Tyler O’Neal (well, Chinese with Irish roots apparently). Despite his offensive powers, he moves very slowly and as a result struggles to make defensive plays against faster, smaller centers. Since the ASUS PG258Q 240FPS steroid injection, Mr O’Neal has nearly tripled his average blocks-per-game stat, attributed to being able to read shot fakes, face-ups and up-and-unders way easier at a higher frame rate. 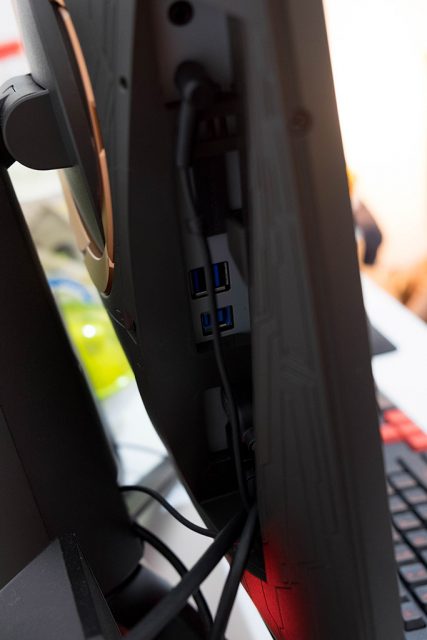 On the other side of this new gaming prowess comes the downsides of having a TN display. I do a lot of color sensitive work, and the color space representation on the PG258Q is nowhere near the capabilities of my IPS displays. This applies even on the sRGB mode, which is supposed to be a more standardized color rendition.

The other downside is that the viewing angles are quite terrible. The display actually holds up surprisingly well for a TN monitor when viewed from the side. But colors invert terribly when viewed from the top or bottom, much to the chagrin of my girlfriend, who is much shorter than I am and enjoys watching shows on the bed. As such, our Netflix and chill sessions are now reserved for the television in the living room.

It has to be noted however, that these drawbacks are typical limitations of TN displays anyway, so they should not be marked against the monitor too harshly.

The monitor also comes with a bunch of nice-to-have but not deal breaker/maker features, such as manual crosshair, timer and FPS overlays. The crosshair overlay is very useful for games that annoyingly run without them, such as Rust. The feature seems tacked on however, as there are only four to choose from, and they are large, clunky and not anti-aliased. Some of the crosshairs are so thick they eclipse a distant enemy’s head. 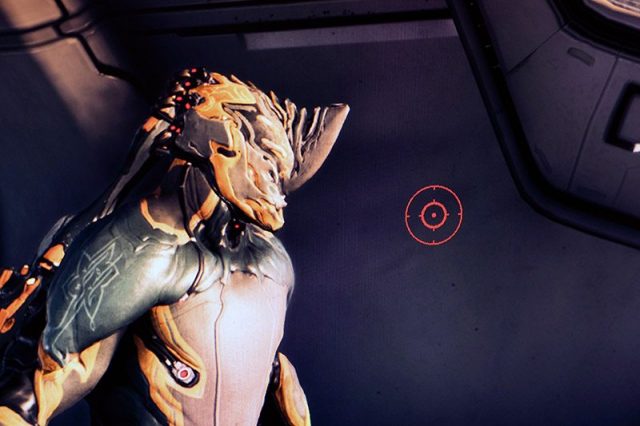 The stand projects a somewhat annoying ROG logo onto the table. It might be cool for some people but I found it distracting, especially when I am gaming in a dimmer environment, like when the girlfriend is sleeping. Thankfully, this can be turned off. 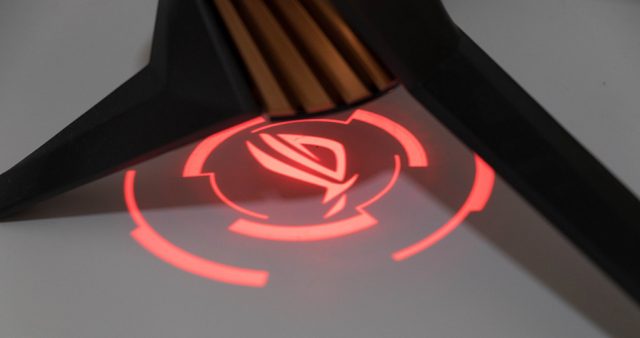 All-in-all I found that the ASUS PG258Q excelled in its primary purpose of delivering hardcore, breakneck FPS.

My main gripes with the monitor, apart from the typical TN issues are the obnoxious base, the slightly gaudy aesthetics and the somewhat tacked-on side features. It’s a solid purchase for anyone looking for a 240FPS display, but make sure you have the table space to pull it off.

My wallet trembles in fear because I don’t feel like going back to 60FPS ever again. It didn’t unleash my True Potential, my limit break, my Super Saiyan; but Tyler O’Neal of the Milwaukee Bucks probably made the All-Star team this year as a result, and I am very thankful indeed.