The wait for Black Widow’s release has been a painful two-year wait experience for fans of the Russian super-spy and Avenger. With the movie promising a final send-off for Natasha Romanoff (Scarlett Johansson), trailers and teasers along the way gave fans fresh glimpses at new characters making their debut, from Florence Pugh’s Yelena Belova to David Harbour’s Red Guardian. Still, one character has had their identity kept hidden for a long time, but finally, fans know who’s under the mask of The Taskmaster.

All suited up in the trailer, Taskmaster’s debut has been something fans have been looking towards and the fact that the actor or actress behind the villain had been kept secret up until the film’s release is something of a rarity in spoiler-filled Hollywood. Cue the shocked gasps because behind one of the baddest villains to enter the Marvel Cinematic Universe (MCU) is none other than the beautiful Olga Kurylenko.

Speaking in an exclusive interview with Geek Culture, the 41-year old Ukrainian-French actress is finally free to reveal her secret role as Taskmaster. Like many others who join the MCU, Kurylenko was ecstatic to join the cast and was even more pleased to play a villain.

“Villains are always very interesting to play in the fact that there’s always conflict. With my character, it’s not just all black. There is usually a reason why someone becomes a villain,” shared Kurylenko.

Taskmaster’s big identity reveal came closer to the second half of the Black Widow film when Dreykov (Ray Winstone) reveals that his greatest creation yet is Antonia, a daughter of his that Natasha supposedly killed in her attempts to defect from the KGB’s Red Room program and into S.H.I.E.L.D. Dreykov’s daughter, remember?

Unable to make choices of her own and exposed to psychological abuse at a young age, Antonia is trapped by her father, brainwashed and serves as his personal killer who is able to mimic her opponent’s every move.

Antonia was finally released from her father’s grasp when Natasha exposed her to chemicals that counteracted Dreykov and Melina’s mind-controlling serum in the last bit of the film. The scene was a rather emotional scene for the two women who had been in combat for a good 2 hours.

“You realise with Antonia she went through quite a bit of psychological abuse. It’s not explored in depth but there are hints and glimpses that you see. Underneath it, and when the spell goes off, there’s a damaged human being who wants to love, who wants to be loved, who’s capable of love but doesn’t know how,” said Kurylenko.

Prior to the movie’s release, and the big reveal in Black Widow, fan theories and early leaks suggested that the person behind Taskmaster was anyone, from Melina Vostokoff (Rachel Weisz) to Rick Mason (O-T Fagbenle). In the comics, the villain was most notably known as Anthony Masters.

Though Kurylenko doesn’t concern herself with theories, the 41-year old actress was amused with fans’ obsessions to identify who the big bad villain was. This is especially since she had known that the role was hers to play right from the start.

“I found out about [my role] when the offer came. I got the offer and they said, ‘We’d like to offer you Taskmaster’ and obviously, it didn’t take me very long [to accept], I was super excited!” exclaimed the actress.

“I don’t know how long the studio was deciding that, it’s a question to them but from the moment I knew that I’ll be playing the character, I was just ecstatic. It was so much fun.”

Catch Olga Kurylenko as Taskmaster in Black Widow, now in cinemas and on Disney+ Premier Access. 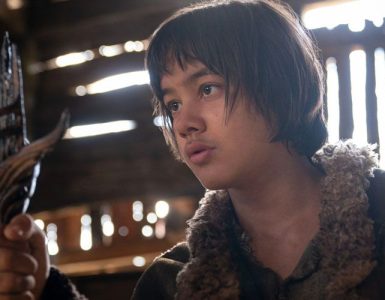