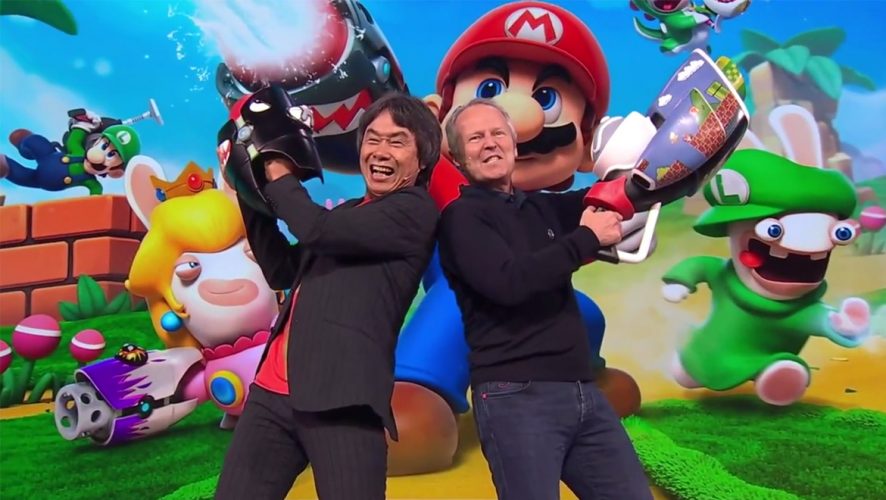 One of the mainstays of E3 in recent times, Ubisoft has been getting bigger with each and every year with some of the more hotly anticipated titles at E3. With Assassin’s Creed Origins, Mario + Rabbids Kingdom Battle, The Crew 2, and more, this year was no exception (we do miss Aisha Tyler though)!

Rabbids and Mario collide! As previously leaked, the crossover game featuring the mischievous Rabbids and Nintendo’s main man was officially announced. Shigeru Miyamoto himself was on hand to unveil more about Mario + Rabbids Kingdom Battle alongside Ubisoft’s chief Yves Guillemot. With the Rabbids transported into the Mushroom Kingdom, we the Rabbid counterparts of characters like Princess Peach, exploration appears to be a key tenet of this new title.

A turn-based tactical adventure game, be ready to face off against rabbid…Rabbids and other foes. Use abilities like Team Jump to manoeuvre the battlefield in addition to the more standard, limited movement within a grid a la Fire Emblem. It even has an overwatch ability like XCOM! Mario + Rabbids Kingdom Battle looks to be a much more comprehensive title than initially thought, with the potential for something special with depth and tactical options for players. Add in loot, unique enemies, a progression system and more, the best compliment I can give this game is that it is a Ubisoft/Nintendo version of XCOM, and I am excited!

Ten years has passed since the first Assassin’s Creed, and how apt it is that Origins explores the conception of the Brotherhood itself in ancient Egypt. Out of the gate, this is one jaw-dropping and graphically impressive game, and the world of Egypt lends itself extremely well to the premise. Wage combat on land and on water, explore deserts and oases alike, and stand amongst the people of ancient Egypt and be an Assassin. Welcome back, Assassin’s Creed.

Singapore represent! From the creative minds of Ubisoft Singapore, we caught a glimpse of this seafaring adventure with some intense ship combat, albeit in a CG trailer. Make a name for yourself as the biggest and baddest pirate kingpin in all the seas, as you fight in a shared, systemic world with tactical ship combat.

With cannon barrages, ramming, boarding, and all around bloody combat, Skull & Bones can be played solo, or more appropriately, with friends, with PvP modes catered for that purpose. Then again, if it’s anything like Black Flag, sign me up right now for Skull & Bones! It will release Fall 2018.

Already generating a considerable amount of buzz before E3 even began, Far Cry 5 touches even more on modern sensibilities with its particular subject matter, and we are all the better for it. Hope County, Montana, an idyllic home now overtaken by a fanatical cult, and its all up to you and your allies to save the day.

Far Cry‘s brand of gunplay, exploration, and usual craziness can only mean a great time, and we get to have a canine companion alongside your real-life or AI buddies, that ticks all the boxes.  February 27, 2018, cannot come soon enough!

Beyond Good and Evil 2

A scheming monkey, a criminal hog, flying bikes, and a futuristic world, this crazy combination makes up the world of Beyond Good and Evil 2. Finally made real, the prequel-sequel to the cult classic will once again be about evil corporations, the control over the spacefaring people of the universe, and the fight for freedom.

With a seamless, online playground to explore by yourself or with friends, this is a world ripe for the taking and all it needs is you. Keep an eye out for this one!

With more cars, bikes, boats, and even planes, The Crew 2 offers more ways for players to race and compete worldwide to be the king of all motorsport. Easily go from street racing on the asphalt to forging your own path off-road. Better yet, navigate through open waters and narrow rivers before taking to the skies through the clouds and in between skyscrapers.

Ubisoft wants you to mess around in yet another visually stunning world, will you be the champion the world is looking for? Be prepared for The Crew 2 when it comes out early 2018.

South Park: The Fractured But Whole

After the successful Stick of Truth, the immediately memorable South Park: The Fractured But Whole now takes on the superhero genre and is every bit compelling as the first time we saw it. With its classic humour and characters, get ready for hours of role-playing fun this October 17.

Even more South Park news, Phone Destroyers looks set to bring that turn-based strategy goodness onto smartphones, with plenty of classes to mess around. With cowboys, Indians, knights, bards, aliens, pigeons (!), and even more craziness awaiting, be prepared later in 2017.

A spacefaring adventure with real-life components, Ubisoft’s entry into the toys-to-life genre appears to combine premium toys with a solid game. A massive, living star system is yours to explore, with a fully customizable ship that can be altered using both digital and physical components. It is even portable on the Nintendo Switch, cool!

Steep: Road to the Olympics

An expansion for the adrenaline ride that is Steep, it adds even more content to the open world extreme sports title, with the Olympics the notable addition. Get ready to ski, snowboard, and slalom your way to become a legend this December 5.

A creepy reveal featuring Elijah Wood, Transference asks you to enter the mind this spring 2018, and appears to be a VR experience that has tenets of psychological thillers and first-person interactions, more to come for sure!

Definitely not for everyone, this year see Kpop songs joining the long list of danceable tracks already in place for the Just Dance franchise. A live performance featuring artist Bebe Rexha with plenty of backup dancers, Just Dance 2018 looks set to be an another substantial offering this October.

That’s all folks, what a show indeed! Ubisoft has outdone itself again this year with a slew of new games and potentially wonderful sequels to come, will Sony bring the house down as well? Stay tuned to find out!