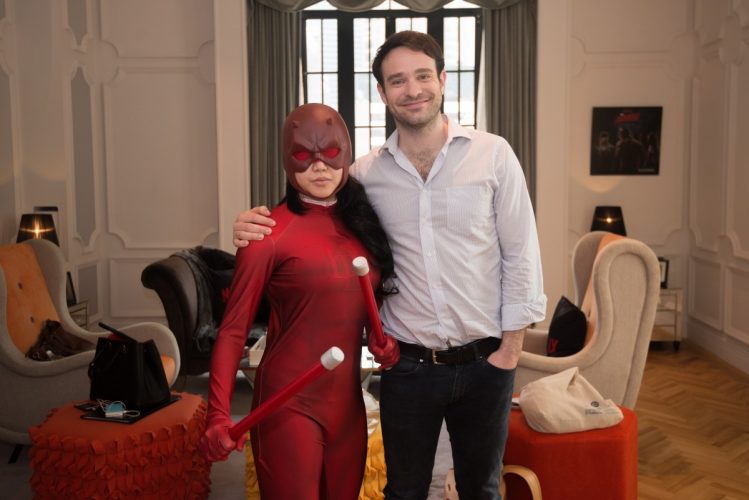 Geek Culture had the opportunity to catch up with the Daredevil of Hell’s Kitchen himself, Charlie Cox, when he dropped by Singapore earlier this week, but rather than just interview the actor, GC decided to send another Devil – me – after him.

One does not face the Devil without becoming a devil herself. So as the resident cosplayer, I went and dug up my Daredevil outfit and prepared to dance with the devil by the pale moonlight. While I was unable to film an epic hallway fist fight with Cox, it was obvious that he was very impressed with our first meeting.

it’s not everyday that i get to start my week with a female @daredevil! #lifeinPR #netflixandbelle #funstuff

“Hello Daredevil!”, greeted the 33 year-old warmly, as I stepped into the room at Sofitel Singapore. Dressed comfortably in a white shirt, the British actor gave me a once over and commended, “Oh wow, you got the batons too.”

Now if that’s not a Nelson & Murdock seal of approval, I don’t know what is.

“Is it hot to wear the costume,” he asked, and I smiled.

Yes it is, I wanted to say, but if you can stay in awesome character for two great seasons of Netflix’s incredible Daredevil TV series, I could last 20 minutes.

Netflix’s Daredevil kicked off the streaming service’s foray into the Marvel Universe and its success has led to highly rated Jessica Jones, and the upcoming Luke Cage. The service recently debuted Daredevil Season 2 in all of its complete 13-episode glory, and having finished watching it in 2 days, all I can say is that everything, from the deep character development, engaging plot, to the introduction of two new characters, definitely did not disappoint.

If you haven’t caught up, don’t worry. This interview is spoiler free. With a much acclaimed first season behind him, how does The Man Without Fear feel about the second season, growing with the iconic character, and what are his hopes for the future? One thing is for sure – he’s looking forward to having an Avenger join him, if The Powers That Be are up for it.

So you took a crash course on the character just before the series started, how did this affect your perception or portrayal of the character?

When you read the Daredevil comics, which I started to do after I got the part, one of the things you discover is the character and tone of these comics changes immensely over the years, depending greatly on the time period, the writer and the illustrators… the look changes. Frank Miller’s Daredevil is very different from Brian Bendis’ Daredevil, who is very different from (Ed) Brubakers’ and even Stan Lee’s.

What was helpful was that the first thing I read was the scripts for this show. Once I had a sense of who the character was from the scripts, I was then able to go to the comics and find the different the runs and eras that best represented the show and concentrate on them. I think if  you were a fan, not to say that a fan couldn’t do a great job, but there would be a danger that you would try to encompass the entire run of Daredevil and that would be a mistake, I think you have to be specific. So I think that was easier for me to do.

How different was it for you to prepare for Season One compared to Season Two?

In some ways, we have less Catholic guilt in Season Two, but partly because he’s so busy in Season Two. In Season One, Matt was after only one man and because he didn’t always have his next move, he spends a lot of time in his apartment feeling the feelings of guilt and concern about the things he’s doing. He was plagued by doubt  in Season One. By the end of the season, because of what happens with Wilson Fisk, I think he feels vindicated. He feels that he made the right choice, that he’s benefited the city, (that) he’s of value. With that comes an arrogance and swagger.

In preparation for Season Two, I really wanted to find a Matt Murdock who held himself differently; a Matt Murdock who knew at the back of his mind he was a celebrity in many ways. And hopefully what’s interesting about that is that he suffers a great humiliation, a great humbling over the course of Season Two, because he’s confronted with even bigger problems than the previous year.

As a British actor cast in an American production, was it hard to learn how to speak with an American accent?

Oh yeah, very hard, and not just the accent but the placement, the tone (and) the sound. It’s not just the sound of the words, it’s the intonation; it’s another thing I have to work on very hard. Of course what (else) matters is (if it is) from a certain place or a certain time. You know he’s blue collar, but he went to Columbia so he’s educated and all of those things had to be taken into account. I worked very hard on that, on the accent. 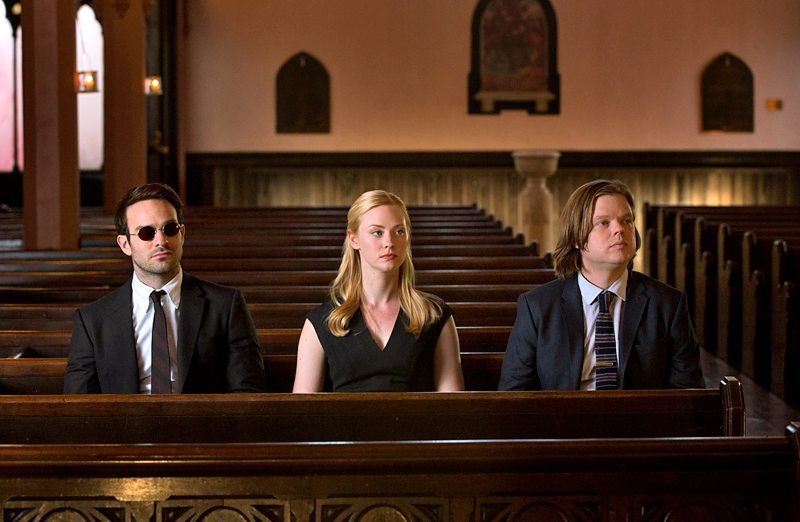 Which characters would you like to see cross paths with Daredevil in Season Three?

I have to be careful about answering this question because I don’t know if there will be a Season Three. I’ve been told off in the past about speculating. What I think, which is fair to say, is I would like see Wilson Fisk return for a full season.

I don’t think we need to have a new baddie every year just because we’re trying to change it up. What I love about the Daredevil comics is that this character, Wilson Fisk, is constantly there, constantly in the background, he can’t get rid of him. The relationship and the dynamic is potentially so interesting and sophisticated true to life. You can’t just kill of all your enemies and wait for the next one to emerge.

I do think  if we do continue to make Daredevil, I would like to see Bullseye show up because I don’t think he would be complete without him. But I do fear for Karen Page’s life if that happens. 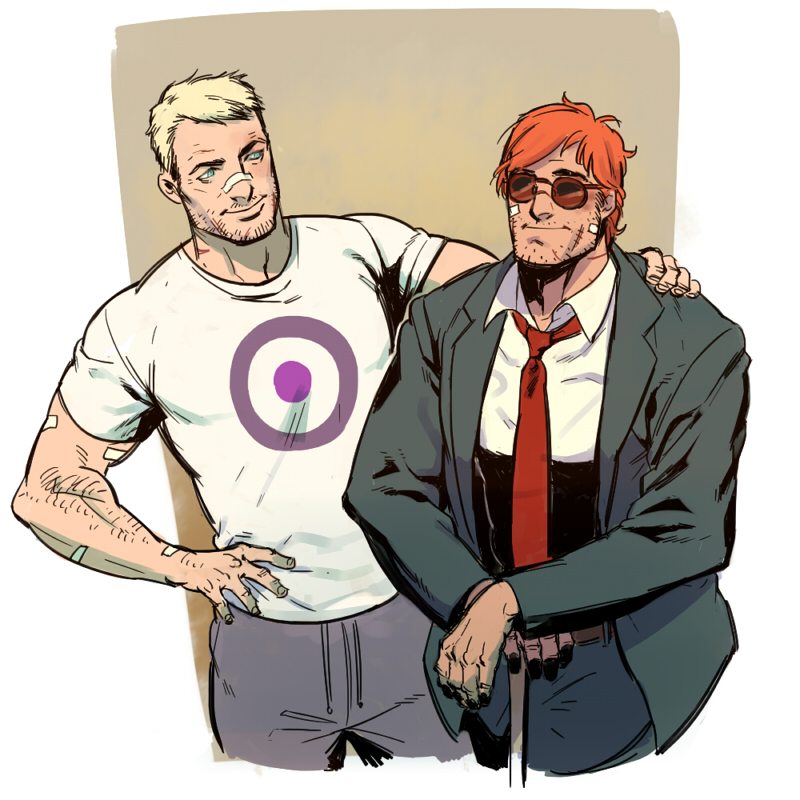 Recently Jeremy Renner said that he would like Hawkeye to appear in a Netflix show. How would you feel if Hawkeye appeared on Daredevil?

I think it would be great, it would be awesome! I ‘d like to see more of Hawkeye. I think he’s such a spectacular actor. I’d love to see more of that character. I’ve learned to love these characters and I didn’t grow up reading comics and so it’s kind of a new thing for me and I feel like part of the Marvel family at the moment. I’m now one of the people, when I read something from the scripts, something that I recognise from the comics – an easter egg – I now get excited.

Who would win in the fight of Hawkeye versus Daredevil?

(Laughs) Daredevil. But Matt’s arrogance would tell him he could beat the Hulk.

What are your thoughts about the contrast between superhero movies on the big screen and a Netflix series like Daredevil?

There is a huge appetite for superheroes and what they (the studios) seemed to have learned is that it’s not just kids like superhero content. Putting Daredevil on Netflix allowed us to give a show to a slightly more mature audience and include slightly more sophisticated themes and ideas and so far it seems to have worked.

One of the things that has become clear to me having met so many Daredevil fans is that you didn’t cease to become a fan when you hit a certain age. A lot of these fans are still great fans, they may not read the comics everyday like they did when they were kids but they’re still great passionate fans and they’re well into their 30s, 40s and 50s. And so, a lot of the older fans that I’ve met have said to me that it’s so nice to have a superhero show that’s just for me and not one I enjoy that’s kind of immature in its portrayal of the world. 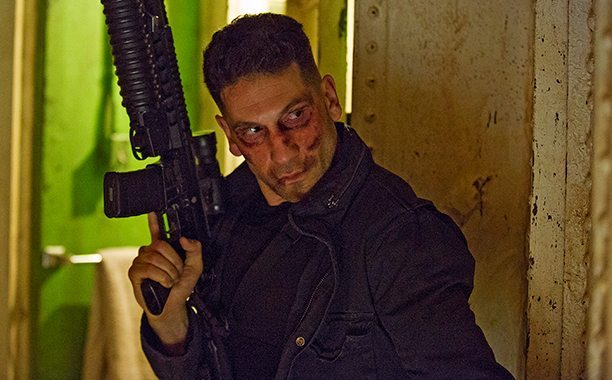 Is there where you think the superhero genre is going, towards the dark side?

I would refrain from calling it a genre. I don’t think “superhero” is just a genre. If you look at the Marvel movies, they’re so diverse I don’t you can categorize them as one thing. Captain America: Winter Solider is a period crime drama kind of thing while Guardians of the Galaxy is incredibly funny, lighthearted, with coloured aliens. Both of them, in my opinion, brilliant, I love them both. But there’s no way I can say that they were of the same genre.

I think that there are some characters whose source material, i.e. the comics, are best suited to be adapted for a more adult audience. Daredevil is one of them, Deadpool is another one and I would argue that Batman probably is as well. I think (personally) if you tried to make an R-rated Spider-Man movie it would be a mistake. I think that he is a character that appeals greatly to the young adults, he himself is a young adult. Matt Murdock is 28,29,30; Spider-Man is 17. So I think it depends on the character.

What are some similarities or differences you share with Matt Murdock?

What I like about this character, about this particular superhero and this particular portrayal of him and the way he is written is that I like exploring his flaws. I like making him relatable by exposing the sides of him that he isn’t maybe as proud of, it’s undeniable that he’s incredibly brave and courageous and a force of good and he keeps trying to help people and he wants nothing more then more then (to be) selfless, to make the city a better place for people but at the same time, he’s also incredibly selfish, he has a disregard for his friends at times, he’s dismissive of them because he believes what he’s doing is more important than friendship. He’s got a temper, he’s stubborn, he’s arrogant at times, he has a childlike sense of invincibility and I relate to a lot of those qualities.

What do you think of Batman v Superman?

I haven’t seen it yet, it must have just come out. But I’m eager to see because I worked with Henry Cavill, with whom I worked with on Stardust, is in it. He’s a friend of mine and I think he did wonderfully in the movie.

It's all about making a choice.