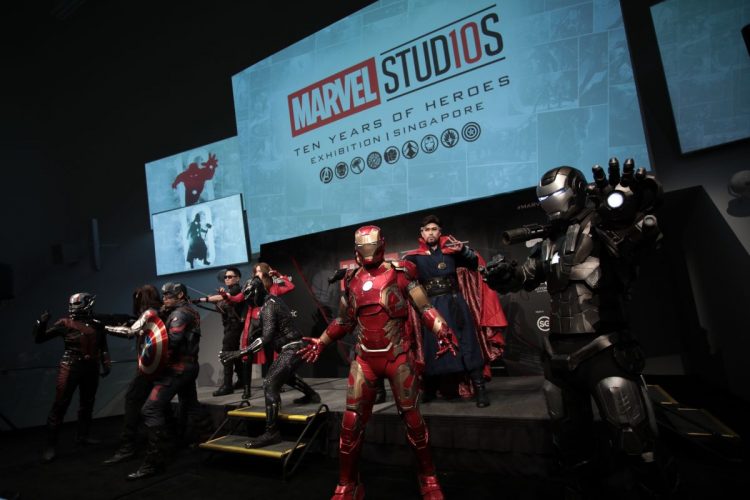 Avengers Assemble At The Marvel Studios: Ten Years of Heroes Exhibition In Singapore

Since Avengers: Infinity War was a movie 10 years in the making, Walt Disney Company and the Singapore Tourism Board have teamed up pay homage to those 10 years with the Marvel Studios: Ten Years of Heroes Exhibition at the ArtScience Museum. Split into 10 different areas themed after members of the Avengers and their movies, the exhibit kicks off with a gallery of all 19 Marvel movie posters. 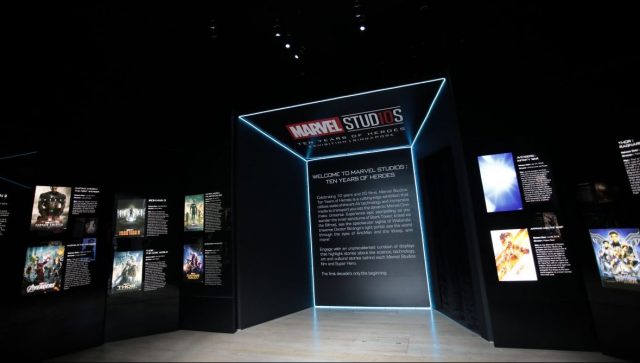 The posters and descriptions give you a bit of a refresher on Marvel’s history up till now, but if you are already well-familiar with Marvel movies, then head in and be greeted by Tony Stark’s workshop. Images of all iterations of Iron Man’s armour are projected onto a plain white Iron Man statue, showing the evolution of the iconic design over the years.

If only there was a real-life Hall of Armours displaying the various Marks, instead of one white figure stood before an overhead projector. Blueprints of earlier Marks and TV screens with clips of the Iron Man movies are on show as well. However, what immediately catches the eye is a massive statue of Iron Man, poised atop the Stark Industries banner, so huge it almost reaches the ceiling. 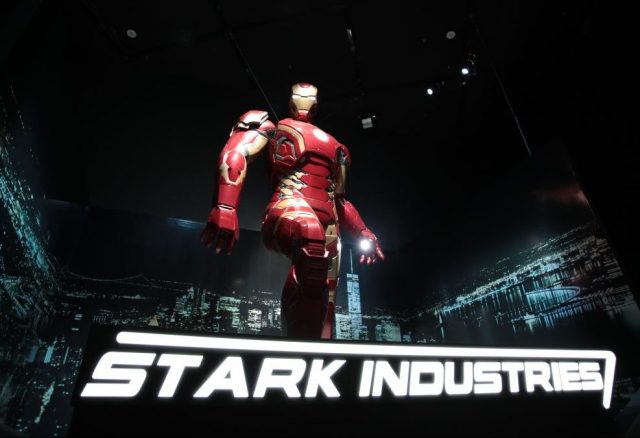 Moving on to the First Avenger, Captain America’s area features a long wall adorned with the painting as seen in the memorable Smithsonian museum scene of Winter Soldier, but that’s the extent to which it mimics the scene. This exhibit could’ve had so much potential – perhaps including the write-up of Bucky Barnes on the wall that Steve Rogers looked at in the film, or having mannequins with Cap’s uniforms over the years.

The rest of Captain America’s area consists of only 3D hologram images on screens that share the stories of three shield designs. Is getting physical replicas of the shield to put on display so hard? He’s the First Avenger, his exhibit in a museum deserves more than just a printed wall and images on a screen. 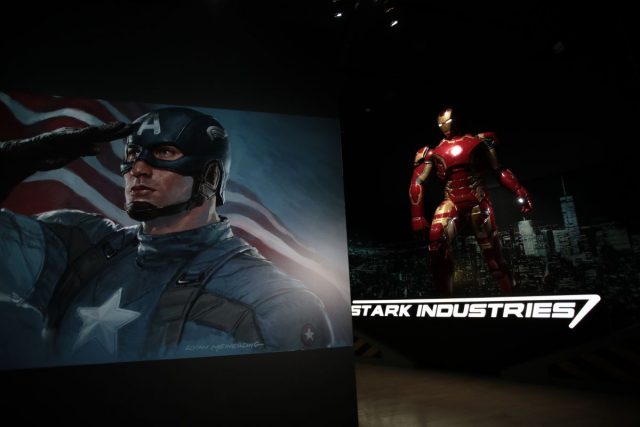 A replica of the S.H.I.E.L.D Helicarrier as seen in The Avengers is set up against projections of a sky to make it seem like it’s taking off from the water. 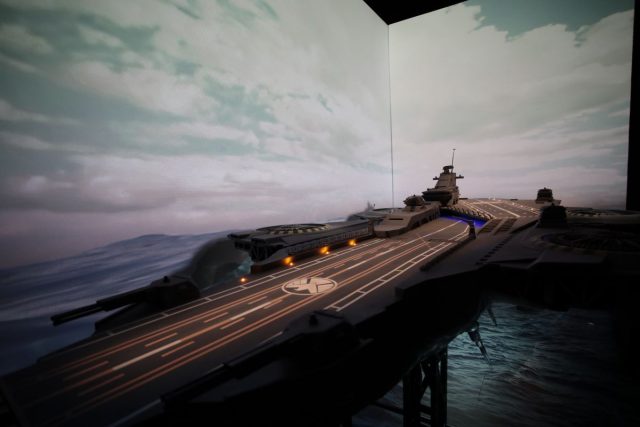 We travel to the next gallery not on foot, but by Bifrost. With a psychedelic wall on one side an mirror on the other, the pathway is transformed into the colourful rainbow bridge from Thor: Ragnarok.

We just wish that the floors had the same lights as the walls for the full immersive effect of walking along the Bifrost. But no matter, that’s something that creative camera angles and a bit of lying down can fix. Here was our attempt, maybe you could try for an even more convincing picture of walking on the Bifrost.

At the end of the Bifrost is Sakaar’s gladiatorial arena from Thor: Ragnarok, where life-sized statues of Thor and Hulk are on display in the midst of their intense battle, all the while the Grandmaster and Loki are watching from the stands above. Bit of a wasted opportunity as they could’ve had a looped video of the Grandmaster and Loki in the back reacting to fight instead of just a picture, but the sculptures are a great photo opportunity. 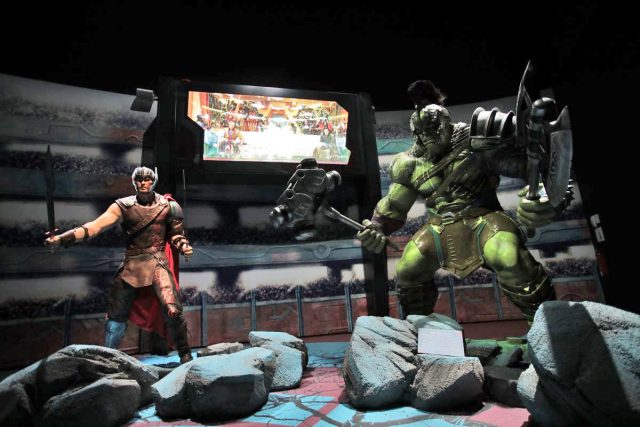 Time to head out into the galaxy in the next gallery as we step into Yondu’s ship from Guardians of the Galaxy Vol.2. Apart from a statue of Rocket with Baby Groot atop his shoulder, the main attraction here is the interactive displays where visitors can “dance with Baby Groot” via a Kinect-like device translating your movements onto an on-screen Groot. I say main attraction, because it’s the only attraction. 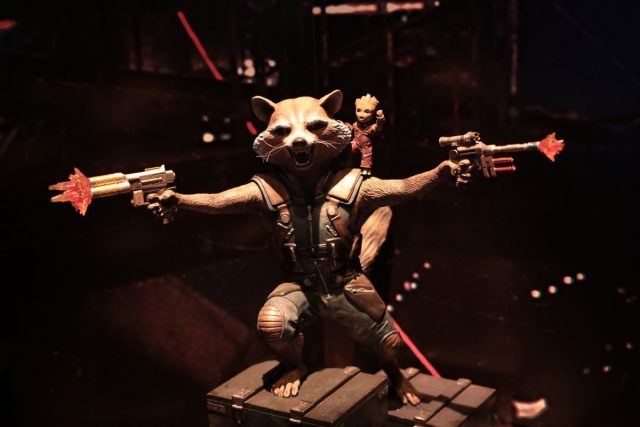 The sixth gallery recreates the mystical atmosphere of the Sanctum Sanctorum, with a Beast Kingdom statue of Doctor Strange and an Eye of Agamotto replica on display. 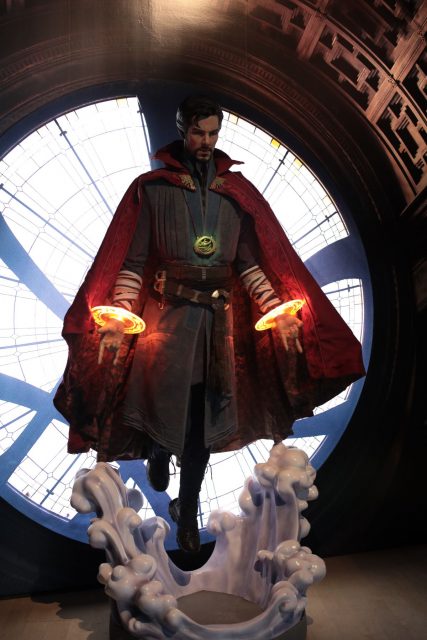 More interactive displays, where once again Kinects allow you to reach out with a hand and either bend reality or open a portal. Choosing to bend reality turns your image on the screen into a kaleidoscope-esque visual that you can manipulate with both hands. Meanwhile, opening a portal by drawing a circle with your hand conjures up images of far-away places, or even better, a live video feed of another portal display set outside the exhibition in Marina Bay Sands.

If there was really a need for so many “interactive displays”, they could at least be made to be more engaging instead of the only activity being a general flailing of arms. Give kids something to shoot, give people something to customise.

Next, Black Panther’s area should make us want to scream “WAKANDA FOREVER”, but it’s pretty small, consisting only of panther-head cave entrance and a Beast Kingdom statue of Black Panther. A disrespect to the true king. 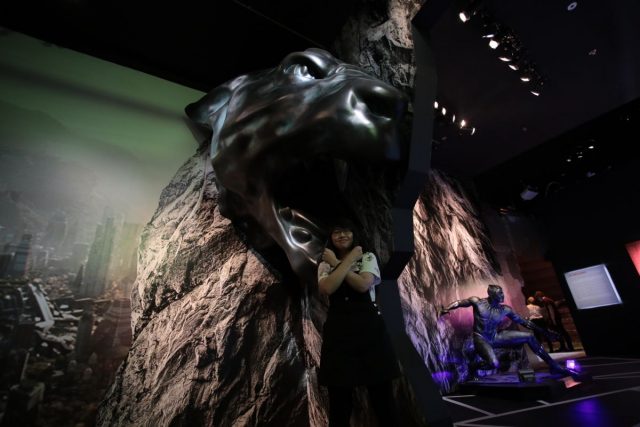 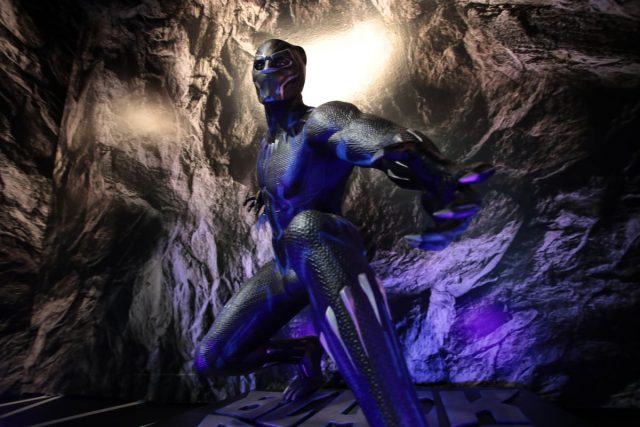 Ant-Man may have been missing from Infinity War, but lucky Scott Lang has an entire zone dedicated to him and the upcoming Ant-Man and the Wasp. We step into a small section with a larger-than-average table, but it’s not quite small enough as a joystick and piano would be way bigger if it were to scale with ants. We stepped on the piano keys and buttons in the hopes that they can be pressed – they can’t. Big bummer on the interactive front. 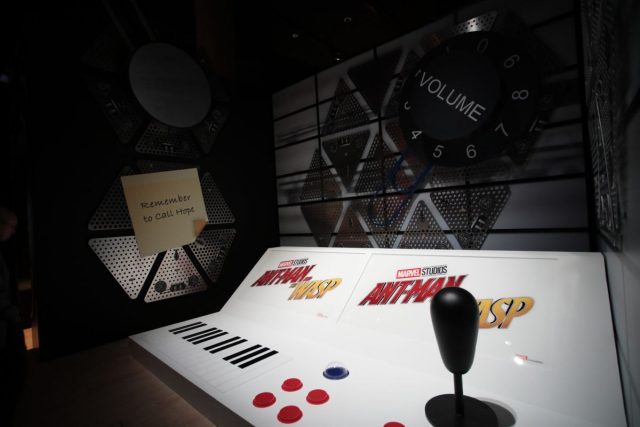 There are also teeny scale replicas of Ant-Man and the Wasp which are pretty cool, with magnifying glasses set up to help you see them better. Here’s an idea – what about a small glass ant farm populated with ants, and the lil’ Ant-Man and Wasp figurines inside, so small that they fit in with the ants? How’s that for a cool display?

Dread it, run from it, but destiny still arrives, as the ninth gallery is all about Thanos and the six Infinity Stones. An interactive touch-screen display introduces the Infinity Stones, while a gauntlet-less Thanos statue stands tall for a photo opportunity with the titan himself. The 1:1 scale gauntlet in the middle looks to be the light-up replica that Beast Kingdom is releasing this year. 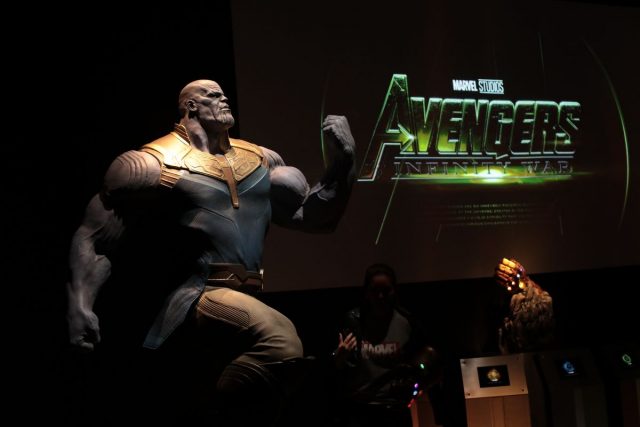 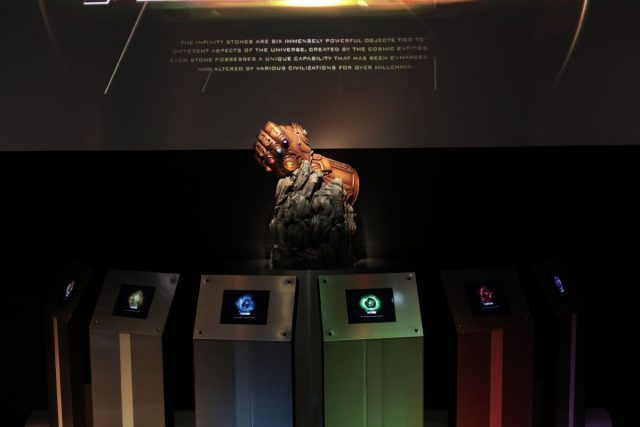 Other than the touch screens and statue the room feels… empty. Somehow I imagined Thanos’ area having a bit more grandeur. It doesn’t even have the surrounding wallpaper to immerse you in an environment like the rest, just plain black walls and a screen showing Avengers footage.

The exhibition culminates in a gallery, once again equipped with Kinects and a screen, letting visitors see dusty silhouettes of themselves on the screen (spoilers…?) before stepping onto the icons of their favourite superheroes on the floor to launch a video celebrating some of the best moments across Marvel films. This was referred to as using Augmented Reality (AR) technology, but please, people need to stop calling things that are not AR, AR. This is taking a rough blob of your shape in a dark room and projecting it on a wall, this isn’t AR. 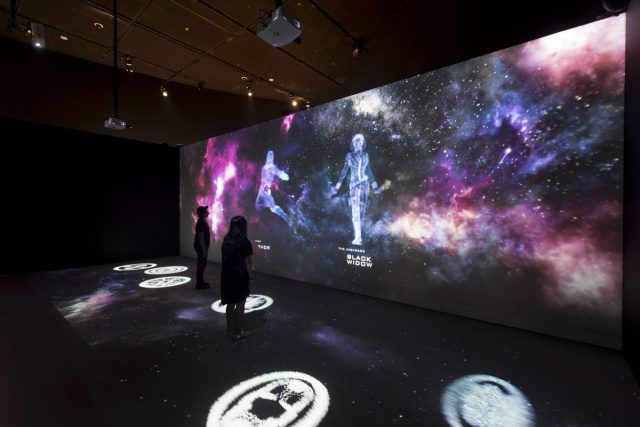 But don’t forget, this is still a museum after all, so the exhibition weaves in bits and pieces of educational displays curated by the ArtScience museum in each section that is linked to each of the heroes. For instance, there are fun facts and artefacts from Norse mythology that Thor is based on, Dutch artist M.C. Escher’s lithograph Convex and Concave (1955) that inspired the reality-bending in Doctor Strange, and write-ups on the art movement Afrofuturism that was a big theme in Black Panther.

These little sections were actually interesting to read, with objects to look at and things to learn, although I predict the museum’s efforts to be educational would be glazed over by many. 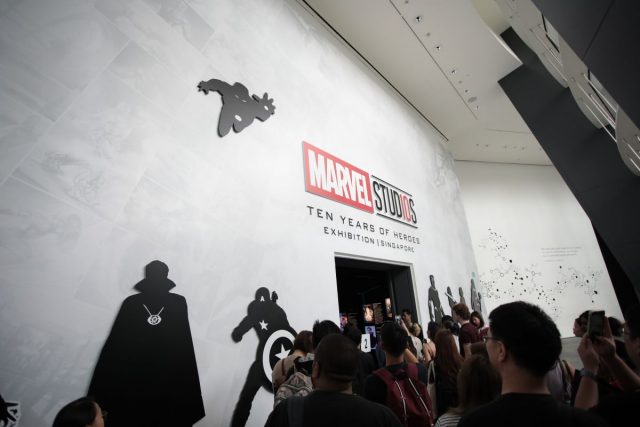 An exhibit meant to celebrate 10 years of Marvel, but incredibly underwhelming, with one-too-many interactive displays instead of physical items such as props and costumes used in the movies, or even replicas to admire. Perhaps it’s a bygone era – museum exhibits actually having a curated collection of objects on display instead of statues from a licensed toymaker and screens. So… many… screens.

It heavily pales in comparison to the impressive Marvel Avengers S.T.A.T.I.O.N at the Singapore Science Centre 2 years ago, which was filled with interesting exhibits to read and experience.

This Marvel exhibition was described as giving visitors a chance to “relive key moments from all 19 Marvel movies,” but I came out of it reliving nothing and feeling empty. Well, at least you can get some Instagram shots with the statues and some sweet Marvel merchandise from the gift store at the end.

The Marvel Studios: Ten Years of Heroes exhibition will run from 9 June till 30 September 2018. Standard tickets are priced at S$19 for adults, S$14 for seniors, students, and children, and S$54 for a family package (2 kids, 2 adults). Residents of Singapore can grab tickets are slightly discounted prices at S$16, S$12, and S$45 respectively. Head over to the Marina Bay Sands website for more information and tickets.

The power of thunder is in your hands.

We finally get to see some Fury action.