If you are a fan of anime then you be more than familiar with anime-themed cafes, more commonly seen in Japan. Such as the Square Enix Cafe which features themes such as Nier: Automata and Final Fantasy, as well as the Animate Cafe which runs various themed-cafes throughout the year. Various series such as Card Captor Sakura, Fate/Apocrypha, and Touken Ranbu have collaborated with Animate Cafe.

In Singapore, we are also seeing a rise in theme cafes with the Harry Potter-themed Platform 1094 and Kumoya which often collaborates with other IPs such as We Bare Bears and Snoopy.

Last November Aniplus Asia opened Singapore’s very first anime-themed cafe. Not running on a fixed concept, the cafe will switch themes every month or so, with its very first opening theme being the popular music rhythm game BanG Dream!

This time, in line with the launch of Saekano the Movie: Finale, Aniplus Asia will be allowing its guests to immerse themselves in the season of spring with the Saekano x Aniplus cafe collaboration.

Saekano: How To Raise a Boring Girlfriend (or simply Saekano) is a light novel series centring around protagonist Tomoya Aki and the members of his doujin group Blessing Software as they work together to create a visual novel based on the quiet and beautiful Megumi Kato. The light novel series received an anime adaptation in 2015 and was produced by A-1 Pictures, the same studio behind big anime hits Sword Art Online and Fairy Tail.

The series’ movie Saekano the Movie: Finale is adapted from the light novel’s eighth to final volume and was first released in Japan on 26 October 2019.

Guests will not only be able to enjoy both the themed interior decorated with not only Saekano posters and standees but also figurines from other popular anime series such as Fate/Stay Night and Puella Magi Madoka Magica. There is also a specially curated collaboration menu, based on the main heroines in the series, for guests to dine on. Each purchase from the cafe’s collaboration menu will also entitle the guests to receive a limited edition movie coaster.

Fans can look forward to dining on dishes like Megumi’s Homemade Carbonara (S$15.90 a la carte, S$21.90 combo) which might look plain at first glance but is actually incredibly tasty, much like the series’ ‘boring girlfriend’ Megumi Kato, and the Blessing Software’s Midnight Treat (S$18.90 a la carte, S$24.90 combo) which is filled with numerous ingredients such as a fried ebi, fishcakes mushrooms, and an ajitama.

Of course, no cafe will be complete without a drink for you to sip as you dine and soak in its atmosphere, and the Saekano x Aniplus cafe is no different with three different drinks, all based on the three aforementioned girls.

Guests who spend more than S$50 at the cafe on the collaboration menu and Saekano merchandise in the cafe will also be entitled to receive a premium limited edition 30cm by 90cm Megumi Kato poster. It will only be available at the Aniplus cafe so if you are a Megumi fan, you will not want to miss this chance to bring home her limited edition poster. With the various dishes and desserts available, along with premium Saekano merchandise such as keychains and towels, it should be fairly easy to hit the minimum sum required.

Aniplus Asia will also be holding its very first in-house movie screening with Saekano the Movie: Finale happening on 4 to 5 April, and they have special movie packages for fans looking to catch the film.

The Saekano x Aniplus cafe will run till 29 April 2020 so if you are a Saekano fan, be sure to catch this collab at the Aniplus cafe before it’s gone! 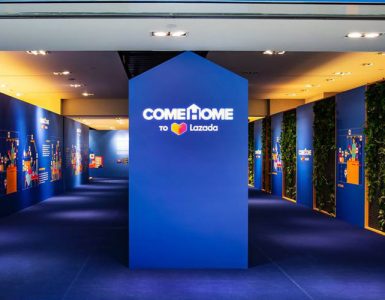 Lazada brings us an online-to-offline experience for retail lovers.