Why Teen Titans Go! Is An Animated Masterpiece

Reboots have a bad rep, and none more so than reboots of cartoons. Just look at all the hate for the upcoming ThunderCats, and She-Ra and the Princess of Power.

If you look back just a little bit further, geeks still think that Paul Dini’s Batman: The Animated Series is unmatched in tone and storytelling. Very few reboots have succeeded, but not because they are bad, but because audiences are not willing to give it a chance.

Because if they did, they would give Teen Titans Go! a chance.

With simple, yet (at times) overly-exaggerated animation, a lot of people think that it’s terrible, that it plays too much on tropes, and that it’s nothing like the original Teen Titans or even Young Justice. But let me tell you something – remove your expectations and forget for a second that the 2003 Teen Titans series existed, and you’ll realize how great Teen Titans Go! is.

For those who don’t know, Teen Titans is a group of five/six teenaged superheroes/sidekicks who live in a giant building shaped like the letter T. They fight crime, and deal with life as teenagers. The original show was critically-acclaimed for its sometimes very dark but complex storylines. The new one? It’s a fun and quirky little show with simplified designs and bright colours. And unfortunately, there are so many people who hate it!

But they are missing the point and this is why.

This show is ridiculous in the best way. One of its most appealing elements is when the characters break the fourth wall. In Teen Titans Go!, they do this several times, but the most notable one is during the episode aptly called “The Fourth Wall”. In this episode, Control Freak, a villain who uses his own reality-warping technology to create whatever he wishes, informs the Titans that their lives are unknowingly being broadcast to the entire world as some television show.

This episode aired in 2015, two years after the first episode originally aired. The world had made its gripes about this show known to the people behind the scenes. This episode is how they decided to answer those criticisms. It addresses people’s complaints about how the humour is so lowbrow, the acting is terrible, and the design and animation are just the worst, especially when compared to the original Teen Titans. Control Freak threatened that the Titans will be rebooted if they didn’t start bringing in the awards and accolades. Not wanting to be rebooted (again), the Titans turned themselves into this.

The show knows that it’s just a kids cartoon meant to entertain. It doesn’t go out of its way to teach you lessons, it’s not here to tug at our heartstrings. It’s just a silly show with silly writing and silly visuals. And they know that.

So Many Pop Culture References

There are a lot of pop culture references here that you might miss if you’re not a 30-year-old who grew up in the United States. One of the best examples of that is in the episode “Squash & Stretch”. Trying to have a relaxing day at the pool, the Titans’ time is interrupted when a squirrel steals their bowl of nuts. They try to catch the squirrel with their powers, only for them to fail. They then craft various plans to get their revenge on their furry foe but because a lot of their revenge plans are very violent, they decide to turn themselves into one of those silly Sunday morning cartoon shows.

That plan sadly didn’t work out, so they decide that turning into an action cartoon would be their next move. They turn into supersuit-wearing heroes, with their own robots and everything, and the choppy movements and fast talking are reminiscent of the early anime dubs in the States. Speed Racer, anyone?

There are so many other references in this show and if you like spotting references, even really obscure ones, you’d find yourself smiling while watching this show.

Its Silliness Is The Heart And Soul Of The Show

Let’s be real. The world is a giant mess. Global warming is a thing, Trump is ruining the whole world, and it’s still hard to be a non-white, non-straight man in this world. And when the world feels like it’s on fire, sometimes, you just need a show that is appealing in its brazen silliness. Imagine a show where a bunch of teenagers with superpowers (or amazing gadgets) jump through lasers and fight robots just to get a sandwich, or were they play Oregon Trail in real life.

Many people try to draw a comparison between the old Teen Titans with the new one, but that’s like comparing the new Mission Impossible movie to the original TV series – they are different beasts, boys. The original Teen Titans had complex stories, great villains and just enough action to keep us on our toes, but that show is over, whether we like it or not.

This show is a different creature altogether, so don’t compare it to the old one. Sometimes, the things we enjoy, our memories of it, is so precious that we don’t want anyone to touch it and mishandle it. We can get angry when they don’t do it the way we remember them doing it (Oh, you hear that Star Wars fans?).

But if we don’t give some of these reboots a chance, then we’ll never progress. It’s hard making completely brand new things and whether we like it or not, nostalgia sells. Sometimes they’re terrible, but sometimes you get little gems like Teen Titans Go!

But only if you give it a chance. 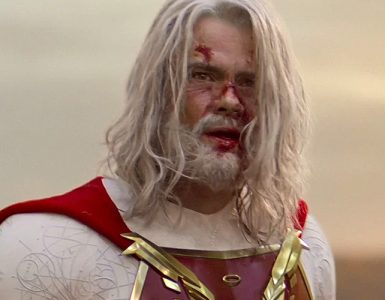 Make way for Supercrooks instead, don't it feel so good to be bad?