It wouldn’t be the X-Men without a certain Merc with a Mouth now, would it? Or at least that’s what Ryan Reynolds likes to think.

The actor, who played Deadpool in a couple of solo movies, recently made a cameo of sorts in Hugh Jackman’s online reunion with the cast of the original X-Men movie back in 2000. This reunion was part of the Global Citizen: Unite For Our Future charity concert, and featured the likes of Halle Berry, Famke Janssen and Sir Patrick Stewart,

Reynolds, who also played an early version of Deadpool in X-Men Origins: Wolverine in 2009, appeared to hate gatecrashed the reunion in hilarious fashion, seemingly “unaware” of the occasion, and the fact that he didn’t appear in the 2000 original. He then “invited” the likes of modern X-Men stars in Sophie Turner, James McAvoy, and even fellow Wolverine co-star Liv Schreiber much to fans’ delight.

Though it was a short-lived reunion, it is no doubt a nice nod to the “many timelines”, as Reynolds so aptly described, of X-Men films that have graced the big screen over the past two decades.

And if you’re keen on more Ryan Reynolds messing up your next Zoom call (or a voice equivalent of his, at the very least), you can snag a Marvel Legends electronic Deadpool head for yourself.

Prepare for a lot of punching. 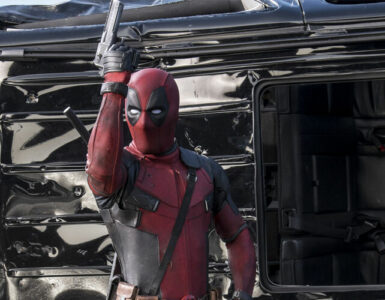 ‘Deadpool 3’ Will Have Violence That Is “In Your Face And Hardcore”, Says Shawn Levy

"It's very much a Deadpool movie."