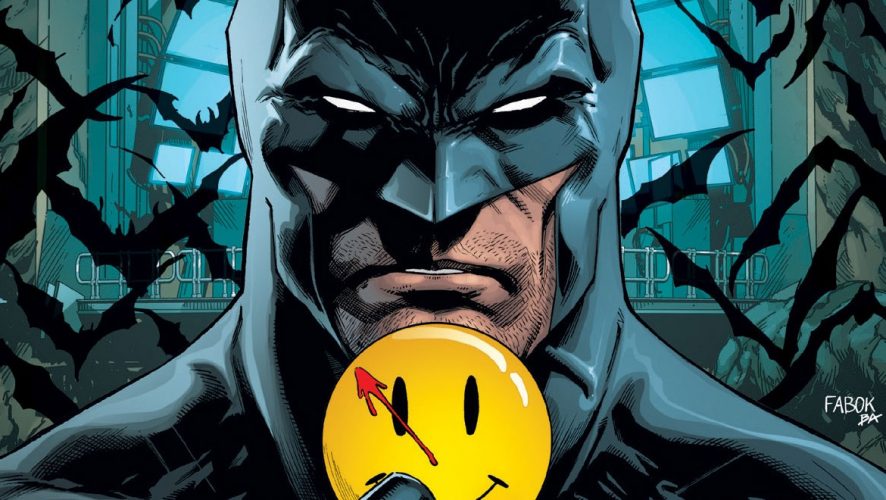 Ever since “DC Rebirth” began from late May to June 2016 last year, DC’s “New 52” initiative came to an unceremonious close. No matter how you may feel about DC’s “New 52” (I personally do not like Superman’s New 52 costume and the younger, more rash Man of Steel that hits first and talks later), it brought in a new legion of comic book readers. This is a younger generation that is not familiar with many of the universe-arching stories in the pre-Flashpoint DC timeline (‘Crisis on Infinite Earths’ in 1985, ‘Zero Hour’ in 1994, ‘Infinite Crisis’ in 2005, ‘Final Crisis’ in 2008, ‘Blackest Night’ in 2009).

Among the “New 52” and now “DC Rebirth” titles, there is one that does not disappoint – the main Batman title. First helmed by writer Scott Snyder and artist Greg Capullo during the “New 52” era, it was handed over to writer Tom King and rotating artists David Finch and Mikel Janin in the current “DC Rebirth” era. The quality of its story and art is consistently good, so it is no surprise that the title stayed in the top 10 of the best-selling comic list. Fret not, fellow Bat-fans who still prefer Snyder’s writing style. He is still writing for the “All-Star Batman” title. 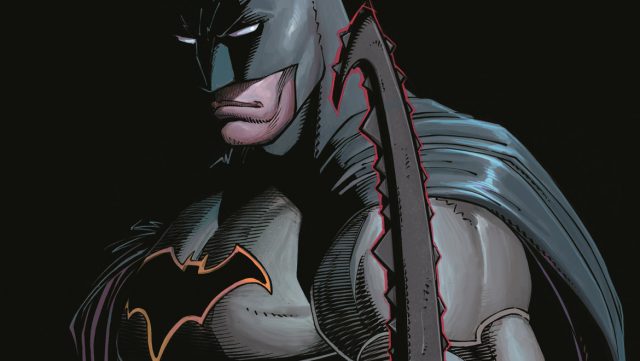 Along with many Batman comic fans, I regard the nearly 5-year run of Snyder and Capullo on “Batman” with great affection. Snyder is amazingly talented with writing proses and pacing the story while Capullo is supremely gifted with his jaw-dropping artwork. Both talents clearly spilled into the book with a brilliant symphony of poetic prose and eye-popping art. Under their care, they reinvented a lot of the Batman mythos with stories like ‘Court of Owls’, ‘Death of the Family’ and ‘Zero Year’.

So when the team left at the close of the “New 52” and the title was handed over to a new team, there was a slight trepidation among Batman comic fans. A worry that the quality introduced by Snyder and Capullo might not continue with the new team.

Well, it is safe to say that the “Batman” title is still doing quite well and there are already quite a few memorable moments created by King, Finch and Janin. King’s writing style differs quite vastly from Snyder’s, focusing on Bruce Wayne’s inner psyche. It’s a good balance of inner monologue and narration, peppered with twists and turns in the story while the Dark Knight fights for his life.

King’s writing gives the “Batman” title a breath of fresh air, complemented by Finch’s meticulous down-to-the-last-detail artwork and Janin’s semi-realistic and expressive artwork. The question is, which Batman moments in “DC Rebirth” will forever be etched in our memories? Here are the top five so far.

[#5] Batman and the Chainsaw 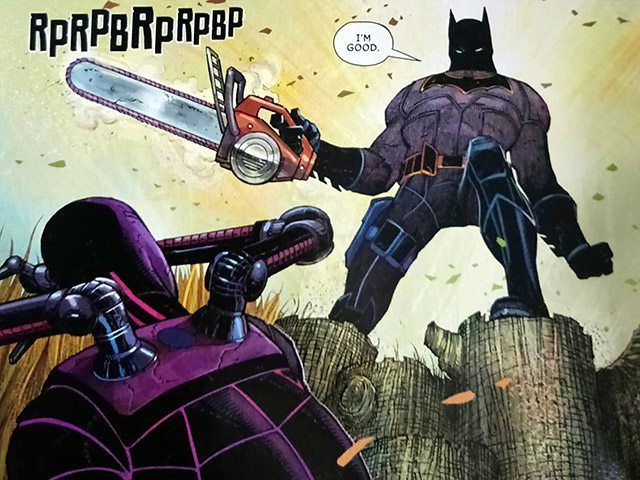 In number 5, we have this favorite moment of Batman just using a chainsaw and about to let it loose on Black Spider. This is, by the way, Black Spider’s debut in “DC Rebirth” since he was last seen in the “New 52” Suicide Squad title and has not not appeared in a while. Bats obviously did not use the chainsaw to kill Black Spider. Instead, he disarmed Black Spider’s mechanical arms.

But how did Bats get his hands on a chainsaw in the first place, you may ask? Well, in the image above, if you see clearly, Bats got his butt handed to him and he was conveniently thrown past some wooden sculptures. Next to the wooden sculptures, the chainsaw was just innocently located there. So what did Bats do? Take the damn chainsaw and proceed straight to Black Spider.

“Batman #20” – Written by Tom King and Artwork by David Finch 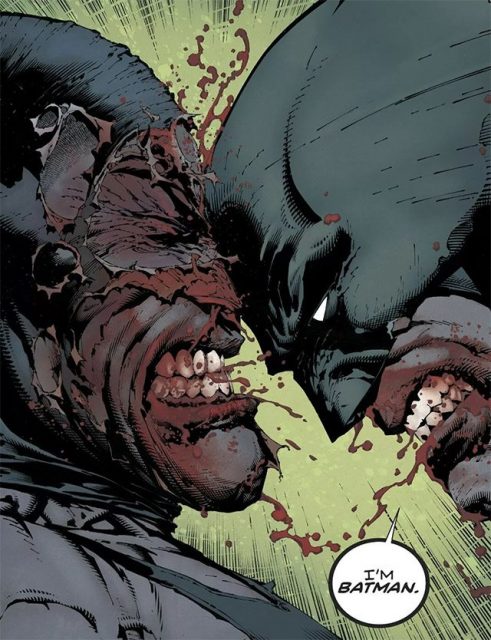 Coming in at number 4 is Batman’s infamous headbutt at Bane in “Batman #20”. In this issue meant to close up the “I Am Bane” story, Bats is being brutally beaten by Bane and Bats is not really in the right mind to do some sophisticated counter-attack against the man who once broke his back. Though the only problem I had with the story was that Bats did not really do anything to defend himself in his fight with Bane and essentially let himself be a punching bat (Sorry, I couldn’t resist!), I personally enjoyed Batman’s inner monologue with his dead mother while he was fighting for his life.

So what’s better than Batman doing the totally unexpected and just headbutt Bane to shut him up? Give him a chance to say “I’m Batman” while doing it!

(“Batman #1 – Written by Tom King and Artwork by David Finch) 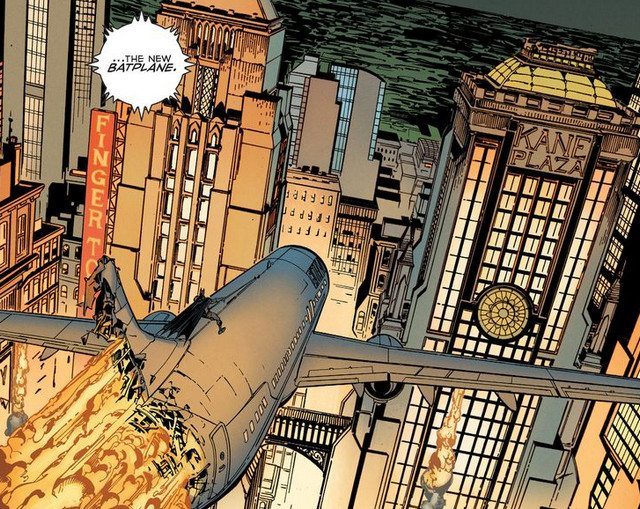 Before Tom Holland’s Spider-Man was seen trying to save a commercial airplane in the “Spider-Man: Homecoming” trailer, Batman was already trying to do the same back in June 2016. Coming in at number 3 is Batman trying damn hard to stop a commercial airplane from hitting Gotham City. With David Finch’s amazingly meticulous attention to details and Tom King’s creative craziness, you normally wouldn’t even see such a comic spread in a Batman comic book. But hey, if there is one person qualified to try to stop a plane from crashing into a city, it’s definitely Batman!

“Batman #5” – Written by Tom King and Artwork by David Finch

Our number 2 moment is one that Batman comic fans have been waiting for almost half their adult lives. Alfred as Batman. Yes, Alfred Pennyworth moonlights occasionally as Gotham’s Caped Crusader and The Dark Knight. Nah, I’m kidding.
Jokes aside, this crazy idea was just for Alfred to dress up as Batman to distract ‘Gotham’ so that the real Batman can swoop in and kick ‘Gotham’ in the face. Thanks to this issue, I really would not mind if DC decided to do a limited series focusing on Alfred dressing up as Batman whenever Bruce needs to call in sick. I would totally add “Bat-Alfred” onto my to-read list every month. Come on, DC, do it! We want “Bat-Alfred”!

My personal favourite Batman moment from “DC Rebirth” so far – BATBURGERS! In “Batman #16”, this hilarious concept was used by Tom King to put Bruce and his sidekicks together to discuss the deadly serious Bane threat. It was so funny that I wondered why it took so long for us to see it in print.

Another funny element was the names given to some of the food and the obvious reference to different ‘deluxe’ food sizes in this Batman-themed fast food restaurant: Batburger Deluxe, Batburger Deluxe Oversized, Bat-Mite Meals (absolutely love the ‘Bat-Mite’ reference being used here), Night-Wings, Robin Nuggets, KGBLT, Riddle-Me-Fish etc. And even though this was a fun concept to use, it also allowed us fans to see how tightknit and sweet the Bat-family is. Pity Barbara Gordon was not in it.

P.S. Even though we already have the DC Superheroes Café here in Singapore, I would definitely love to dine in this BATBURGERS restaurant and Jokerize my fries!

Keith likes to brood in the dark in his Batcave (also known as his bedroom) and wages his relentless war on crime during long, long nights filled with icy, cold air. He is also a lifelong and diehard Batman fan since he was old enough to wear a child Bat cowl. When he is not an illegal but supremely good-looking vigilante, Keith reads Batman comics, builds his Batman Legos, plays with his Bat-collection of action figures and dabbles in Star Wars too. 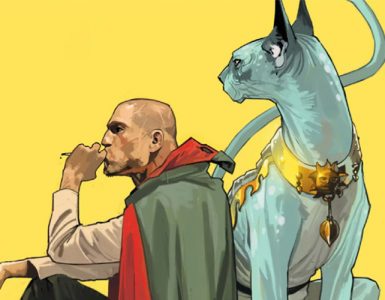 Saga is finally back!