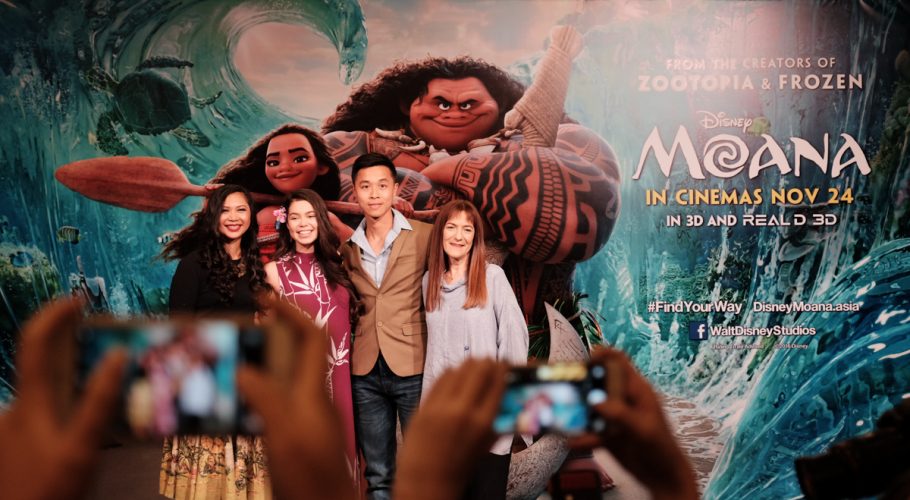 Perhaps it is only fitting that the latest Disney Princess of an island kingdom decided to visit the tiny island Republic of Singapore, for the tour of Disney’s newest animated film, Moana.

We island people gotta stick together, and all eyes were on Moana herself, played by 15-year-old American singer/actress, Auli’i Cravalho, who seems extremely accustomed to being the centre of attention at her age. Maybe it was the fact that the Hawaiian native felt quite at home in an island setting.

In the film, princess Moana embarks on a quest to save her people, and gets some assistance from demigod Maui.

Alas, her co-star, Dwayne Johnson, who voices Maui, was not able to join her here, but Cravalho’s exhibited an energy that enchanted the audience enough, to show that the young girl was more than capable of enthralling people in reel and real life. Joining her here is Singaporean lighting artist Roger Lee (2nd from Left), Indonesian visual development artist Griselda Sastrawinata (Middle), and Moana producer, Osnat Shurer (2nd from Right).

While still only a junior in high school, the soon-to-be 16 ingenue took to the stage like a natural, and surprised even herself when she won the leading role of Moana.

“I didn’t even initially audition for Moana. First, I had seen so many wonderful auditions on YouTube and my friends were also trying out. And, I also doubted myself. I was a freshman in high-school and I was focusing on school and honestly didn’t think I would get it even if I tried out,” she explained to the crowd.

Yes, it seemed like Cravalho was living a real world Disney princess dream, considering that that’s pretty much how her character plays out in the actual movie.

“I trusted myself and went out on a limb. If there is something that I want everyone to know from my story, is that dreams kinda come true.”

At this point, there was a collective sigh that rang out in the ballroom. She’s got everyone enchanted. Alas, not all Asian audiences will get to see or hear her performance. Thai singer Myra Maneepat Molloy and Vietnamese singer Minh Nhu will voice the title character in the local dub of the film in their local language. Together with singers Janella Salvador (Philippines), Maudy Ayunda (Indonesia) and Ayda Jebat (Malaysia), all five will also perform How Far I’ll Go, the theme song from the movie in English, or in their local language.

While we all might have missed the appearance of Dwayne “The Rock” Johnson, Cravalho was on hand to sing praises of her co-star. After all, for the most part of the movie, most of the interaction in the seas take place between Moana and Maui (Johnson).

“As far as I can remember, he’s pretty much been a role model for young adults and for adults as well. He’s really nice!”

As for who her favourite Disney Princess is, Cravalho’s choice is Mulan, who she says broke the gender norm with her depiction.

It seems as though the way to Cravalho’s heart might be with flowers. She was beaming as she recalled how Johnson was sweet enough to give her flowers during the recording sessions together.

While it might be new material that Disney is adapting and venturing into with Moana, Cravalho is really proud working on the film as an individual of Polynesian descent.

“This film is inspired by our wonderful culture, and I hope that it inspires other as well. I understand that we are a minority and there are some films that are based on more fictional references but this one is real. Wayfinding, navigating via the stars, these are things that my ancestors really did do, and that Disney did a film based on my culture, gives me a great deal of pride.”

With that, working with Disney seemed to bestow upon Cravalho the wisdom of her character in the film. With the growing perception that she might be looked upon as a role model, Cravalho was quick to admit that, she’s “still growing and at 15 and is still very much learning.”

Well done Cravalho, you’re pretty much set on the right path with that attitude in life. Kids will certainly be fortunate enough to have you as their role model. But what about the inevitable sequel?

Cravalho smiles and says she’s hopeful. It might not be the confirmation fans might want, but someone better lock Dwayne Johnson in for some recording sessions, just in case.

You can read our review of Moana here. Moana opens in Singapore on November 24, 2016.