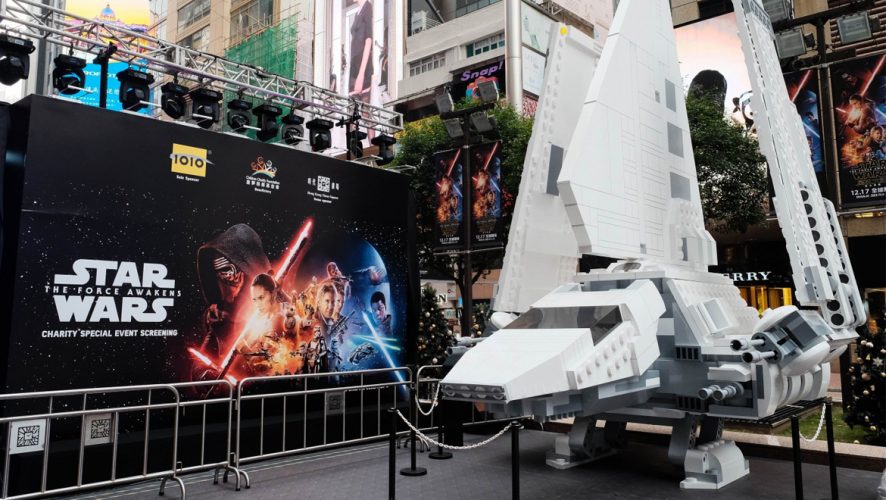 With the Star Wars: The Force Awakens movie released, 2015 was indeed the year of Star Wars, and celebrated all over the world. Hong Kong was no exception and had two grand Star Wars exhibits at the Times Square, Causeway Bay. As these exhibits are no longer on site after 1st January 2016, so here’s a photo gallery of the LEGO exhibits for your viewing pleasure. The second exhibit entails a Hot Toys 1/6 Millennium Falcon, check it out here.

Arriving at Times Square, one would see the a giant version of the LEGO Poe Dameron’s Resistance T-70 X-Wing. Just use the security guard standing by (pun intended) the exhibit as a scale to see how huge this LEGO structure was.

Next to the LEGO X-wing was this massive LEGO AT-AT. Those LEGO Snowtroopers better take cover!

The battle of Hoth scene would be never complete without this LEGO Snow Speeder.

There’s even a LEGO Imperial Shuttle parked on the street.

The LEGO Emperor and Darth Vader was escorted by the Royal Guards.

The LEGO version of everybody’s favourite droids, R2-D2 and C-3P0 made an appearance too!

Here’s hoping the release of future Star Wars movies like Rogue One and Episode VIII would have receive amount of fan fare too!