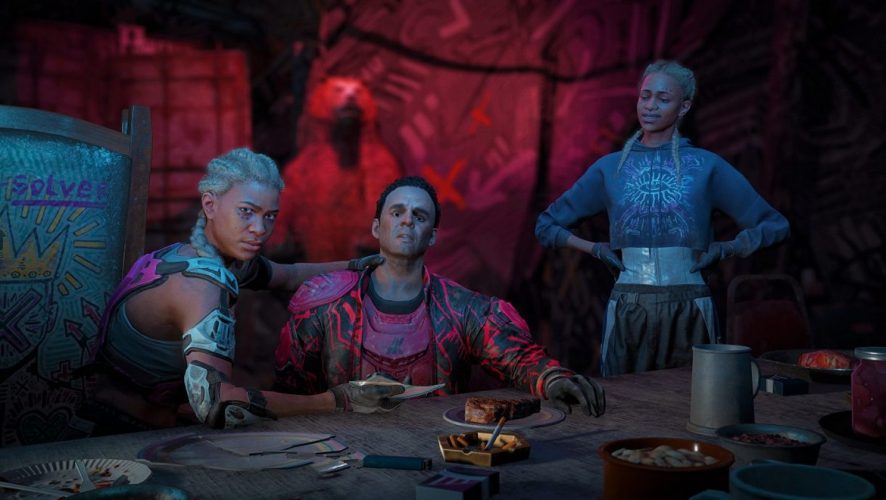 It is now close to a year since we last saw Hope County in Far Cry 5, and it came as a big surprise to most gamers when a standalone sequel was announced at The Game Awards back in December.

Set 17 years after a global nuclear catastrophe, players will return to a much-changed Hope County, a land reborn, with new dangers on the horizons. And to bring us up to speed with this new world is Associate Narrative Director, James Nadiger of Ubisoft Montreal, whom we caught up with at Taipei Game Show 2019, alongside a lengthy demo of the game! 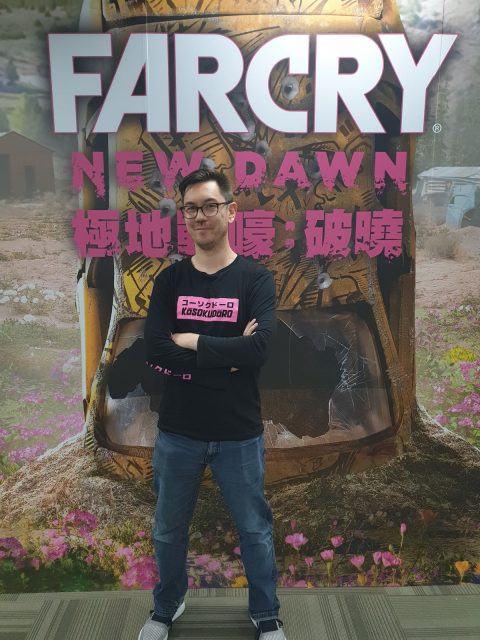 For returning veterans, the whole idea of Far Cry New Dawn is not new, after all, we had both Far Cry 3: Blood Dragon and Far Cry Primal, offshoots of the main core franchise.

But with New Dawn, it is the first time Ubisoft has “done a direct sequel to a Far Cry game coming back to the same space. So in one sense, it is on the level of Blood Dragon and Primal, we get to be a bit more experimental, to have a little bit more fun, go a little bit crazier than maybe what we could normally do.”

And it is with this direction that Far Cry New Dawn comes into existence, and even if you are new to the franchise, Nadiger is sure you will do fine,

“If you’ve never played Far Cry or Far Cry 5; this is the perfect chance to jump in and see what Far Cry is all about, or if you have, you can come back to a Hope County that’s been transformed and see how it’s affected old friends and all the enemies. “

While the main antagonist of Far Cry 5, Joseph Seed, returns for this sequel, he and the cult of New Eden are not the main threat to the players and people of Hope County (as far as we know), instead, it is the sadistic twins, Mickey and Lou. 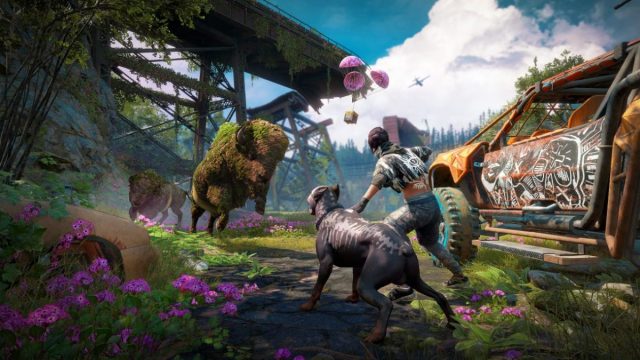 “First of all, we wanted a woman as a Far Cry villain for a long time now, so that was an exciting opportunity. We have a history of very personal conversations with one bad guy and you. Adding a second person into that shakes up that dynamic in a new and interesting way, because as the player, you get brought into the twins’ world.

You can see how Mickey and Lou, they have each other’s back unquestionably. But as you become more of a problem for Mickey and Lou, they each respond to that pressure in a little bit of a different way, and that’s also really interesting to watch unfold in front of you.”

Dealing with the Highwaymen will be key in the players’ fight against the twins, but it will not be easy. After all, it is “a beautiful, open world filled with dangerous animals and vicious villains.” 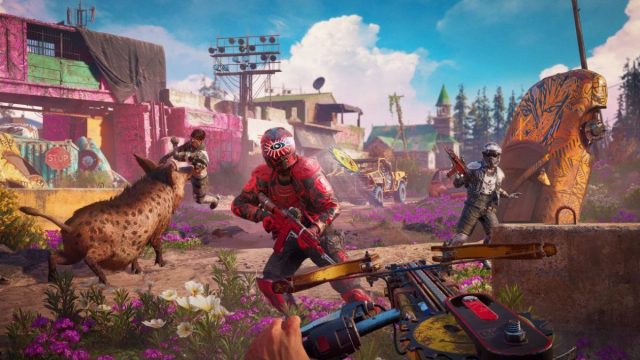 To freshen up the experience, the Ubisoft team has “introduced a light RPG approach in weapons and enemies. Because this is a world where you can’t buy stuff from the store anymore, everyone has to make the best of what they can find by scavenging around. So as you’re roaming the world collecting crafting materials, you’ll be able to craft weapons, and if you improve your weapon workbench, you can craft better weapons to take on tougher challenges.”

It all exudes a feel of the apocalypse, and that extends to the tried and tested formula of Far Cry‘s gameplay loop, like outposts.

“Outposts have been a part of Far Cry since Far Cry 3, and you’ve always been able to replay them in like a menu or a mechanic. We’ve built that mechanic into the story of our game. The outposts are where the Highwayman hoard ethanol. There’s no more gas in the world that we live in. It’s all gone stale, ethanol is the liquid fuel that powers everything.” 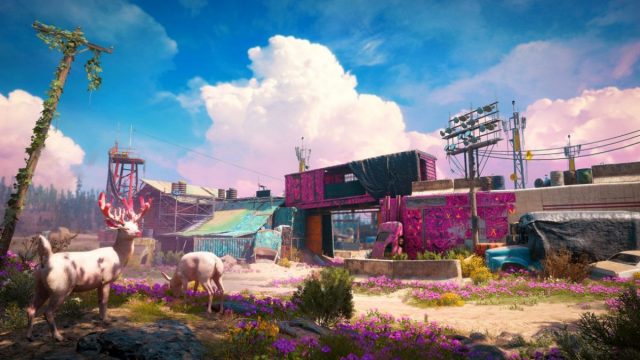 Ethanol is a precious commodity which can be used to “build up Prosperity, so when you free an outpost, just like always, it becomes yours.” All the benefits of an outpost are there, “but when you need an extra bit of ethanol, you’ll have the option to scavenge it, and that will squeeze the last drop of ethanol. Your people will then abandon the outpost, and the Highwayman will move back, and it gets harder.”

“Instead of rank one enemies, there will be ranked two enemies; instead of one alarm, there’ll be two alarms, and they’ll change places. Instead of a sniper, there’ll be a rocket launcher, so every time you replay an outpost for more ethanol, it becomes a harder and unique challenge, because everything gets remixed on top.”

It is this remix of the familiar that lends a brand new sheen onto the gameplay in New Dawn, and on top of that, there are the new Expeditions for players to explore.

“For the first time in Far Cry, the fantasy is not just confined to one place. The apocalypse happened everywhere, so you’ll be able to travel to all different locations around the country.

Each location is a Highwayman stronghold, where they’re gathering up the most valuable crafting materials – you’ll get dropped in, you’ll have to find a package with the materials, and then you have to get to an extraction point to helicopter out.”

“Just like outposts, they’re replayable. Every time you play, there’s a different drop in different extraction, the package moves, the enemies get harder, the types get remixed. So again, on a grand scale, it’s the biggest challenges for the best rewards, and that’s really exciting for us.”

Outside of combat, Treasure Hunts and hunting animals return as well, waiting to test your puzzle solving skills and being an accomplished hunter of curious wildlife.

“In Far Cry New Dawn, we have a series of what we call monstrous animals that are a selection of predators that have developed sort of new natural defences in this environment – full of radiation and Bliss. They’ve been transformed to be the most dangerous predators around.”

At the core of everything, this is Ubisoft “making sure that the systems and the world were all telling the same story about what life is like 17 years after the collapse.” The world of Hope County remains largely the same, however, “due to radiation, certain areas are inaccessible, but we’ve kept the best parts of John’s region, Jacob’s region and Faith’s region to build our map.”

Of course, players can hop into a chain of expeditions of varying difficulties and replayability for a change of scenery, and “offer different gameplay spaces, different biomes, and a chance to see how the rest of the country dealt with the collapse in the apocalypse, as well as see what the Highwayman are doing as they’re spread out all over the country.”

The resistance to Mickey and Lou cannot be championed by just you alone, and that is where the people of Prosperity come into play. Be it the common folk or the rare specialists, they are key to ensuring you have a safety net in the fight.

“As you explore Hope County, you’ll need to bring back specialists to Prosperity, to offer more expertise and to rally the community, and that’s also how you how you progress your own player character. If you want to invest in the weapons workbench, it means you can craft better weapons to take on tougher challenges.

If you like playing with Guns for Hire, you can invest in the training camp facility, which means they can get stronger. You can invest in the infirmary for better health. Prosperity is what drives your own progression, and that’s what lets you take on Mickey and Lou.”

You may recognise some of the familiar faces, like Grace Armstrong, Pastor Jerome, Kim and Nick Rye, and the fan favourite Hurk, amongst others that will join your ranks throughout the game. New characters such as Thomas Rush and Timber the dog will ensure a memorable cast of characters once more.

The progression also covers player abilities and how you play. “You can customize Prosperity to suit your play style and needs. It’s the same thing with the perk points: if you’re into stealth and you can invest them into the takedowns to be more silent when you crouch; if you want to go loud, you’ll invest your perk points into carrying more explosives or more ammo,” it is all up to the player to find the right blend.

It becomes evidently clear that plenty of thought has been put into Far Cry New Dawn, and more than just a cash-in, it feels more like a conscientious effort to give players a brand new experience in familiar guises. And rather than just another shooter, the developers are positioning this sequel as more of a clash of philosophies and ideals.

“When we were researching different models of an apocalypse, we consulted several meteorologists who specialise in Doomsday scenarios. We found that overwhelmingly, there would be two paths to survival. If you were on a piece of land where you could grow crops, or you can hunt wild animals, you could start a life where you could rebuild and make a decent living for yourself.

You would live off the land, and it would be tough, but it would be possible. The Highwaymen, however, don’t know how to grow things, and build things, so the other option is just to take stuff, that’s how they survive.”

While a return to Hope County may suggest a rehashing of the old, this new coat of Mad Max-like paint over the Far Cry formula certainly has us hooked. The gunplay, the clearing of outposts, rescuing companions, rebuilding a world, it is more of what gamers love the most about the series, in a vastly different mould.

It is truly an apocalypse that only Far Cry could make, and we will definitely be in day one on February 15 and taking the fight to Mickey and Lou.

But what about Monster Hunter? 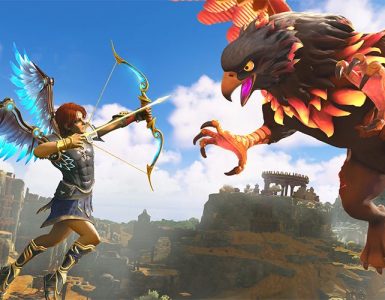 Everything Announced At Ubisoft Forward September 2020

Tons of new games and updates to look forward to.

Prince of Persia: The Sands of Time Remake Landing On Consoles And PC Early 2021

Life-Size Gundam At Yokohama Grand Opening Set For This December