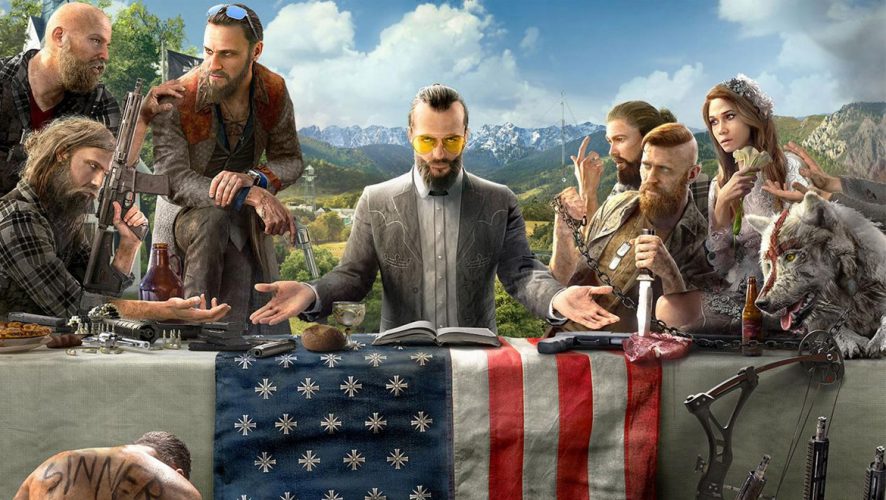 The Far Cry series has pretty much perfected its formula, with each iteration adding a little bit more into the mix, to make it feel like a separate entry. But with Far Cry 5, it feels like developers Ubisoft are attempting to shake off the shackles of the franchise’s legacy, similar to what they did for the Assassin’s Creed series with Origins.

And for the most part, Far Cry 5 stands uniquely on its own. 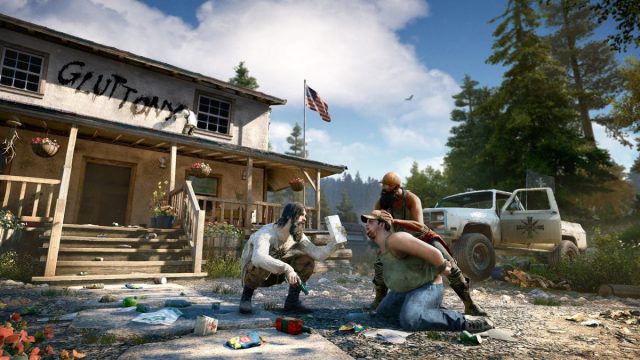 If you thought you will be climbing towers, and revealing more territories to take over, you would only be half right. Gone are the repetitive scaling of high structures, as Far Cry 5 wants you to explore the world and discover its secrets. And there is plenty to sink your teeth into, in its large play area.

The mini-map of old is now gone, and the world is slowly filled in with activities and quests as you roam the countryside of Montana and more importantly, talk to people. It is this kind of organic discovery and commitment to keeping you going all the time that makes Far Cry 5 a really fun experience.

Foregoing the often exotic locales previously featured in the series, Far Cry 5 brings players to the world of rural America. The Northwest to be exact, and into the heart of a militia movement tinged with religious overtones. There are no primal tribes or crazed arm dealers here, as you are dealing with overzealous but very plausible cultists led by a family of charismatic sociopaths. 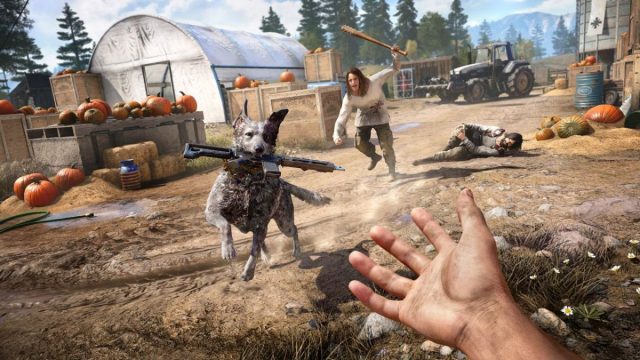 This alternate reality that hits mighty close to home is one that amplifies the political nature of Far Cry 5, but ultimately, the game does not veer too far from its videogame roots into a political commentary. It is a strange reflection of modern America, but for all the high octane action and deranged personalities you will meet, there remains a semblance of a message that the game is trying to put across.

What it is may not be the best representation, or be outright clear with its commentary, but it certainly adds weight to a story than just wanton destruction in a beautifully realised countryside. Unlike previous Far Crys, you can see the fruits of your labour, as the previously oppressed people begin to rise as you take down Eden’s Gate.

Yet, the villainous Seed family remain a powerful force to be reckoned with.

John, Faith, and Jacob Seed spread their influence far and wide in Hope County, each representing a specific arm of the church of Eden’s Gate. The unique blend of signature foes, environment, and overall feel of the different territories help make each character a standout, and more than just a boss to plant bullets into. 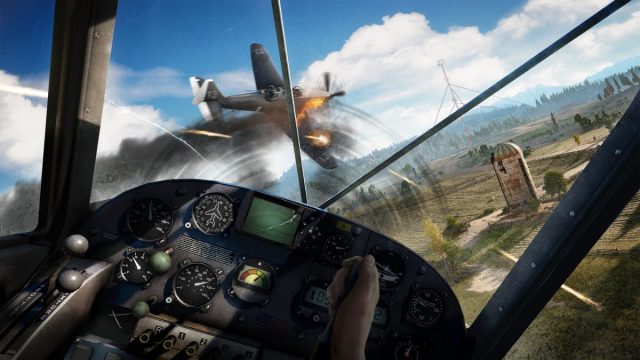 Each herald carries their own story arc, and the fleshing out of their backstory certainly gives players more impetus to bring them down. Suffice to say, the Seed family’s steadfast belief in their values is as solid as they are threatening.

The world of Far Cry 5 is open, and so is your approach to taking down each of the heralds. Players can choose to tackle one specific region, or spread the attention across Hope County, and it is this variety of options that present a very welcome refresh to the series.

Of course, Father Joseph Seed is the main antagonist in Far Cry 5, exuding a creepiness that goes beyond physical intimidation. Unsettling and quiet, this calm and focused individual ranks high among some of the best video games villains to grace the medium.

Hope County is gorgeous, especially with the improvements brought about by the Xbox One X and the PS4 Pro. It is a rich and detailed world, with a believable ecosystem that brings unpredictability to your exploration. Go deep into the jungles and happen upon a hunting bear swimming in the lakes, or get into massive firefight that somehow catches the attention of nearby cougars. 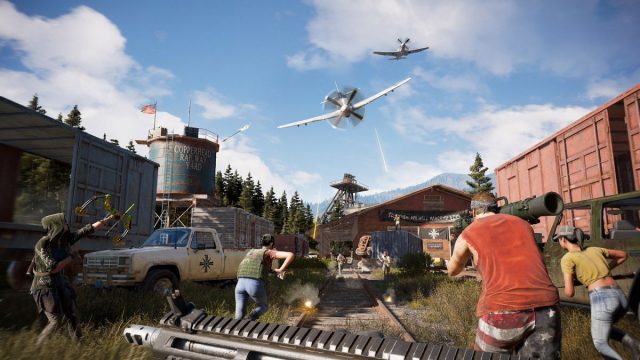 The open world and organic nature of its exploration and discovery makes Far Cry 5 a genuinely great time, but when it comes to mission design, there are flaws that cannot be masked. The set pieces are suitably impressive and grand, and can involve some spectacular hijinks, but such occurrences can be buried under repetitive missions to destroy silos, rescue civilians and so on. It takes away the joy of stumbling onto random and interesting activities if they all feel familiar, and more so the deeper you delve into the game.

Thankfully, the general gunplay of Far Cry is a dream. Firearms give a kick that make every shot satisfying, and stealth becomes a viable option, and sometimes, the wiser choice. With a substantial arsenal, an improved AI, and chaos always waiting around the corner, this might be the best Far Cry yet in terms of combat.

It is significantly improved with the Guns/Fangs for Hire mechanic, where allies can join you in bringing down Eden’s Gate. Ordinary citizens can arm up and join you as added guns, they can even be leveled up and improved! But the more useful specialists like adorable canine Boomer, the powerful Cheeseburger the Grizzly, or human buddies like Hurk or Nick can turn the tide in different and fun ways.

Each specialist provides a specific tactical option that can change up your approach to certain missions, and it is definitely worth hunting them down first to add them to your crew sooner rather than later. 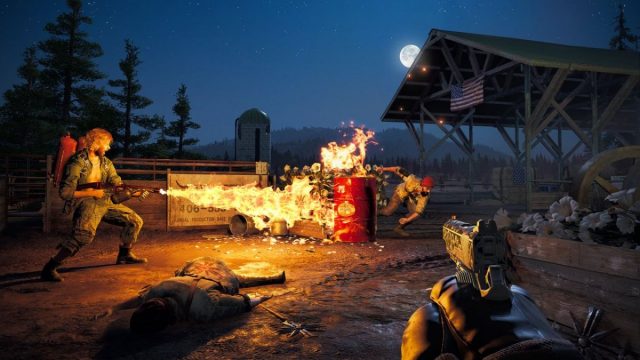 It would not be Far Cry without the vehicles, and the selection of muscle cars, jeeps, helicopters, planes, and even weaponized tractors will always make road trips a party waiting to happen. Add to that the grappling hook, parachute, and wingsuit, and the world becomes your oyster.

Far Cry 5 can also be played with a co-op partner, and more often than not, the mayhem and potential enjoyment is doubled when you are on the same page, or not. To further sweeten the deal, Far Cry Arcade lets players build their own solo, co-op or multiplayer missions, or play through those that others – including Ubisoft – have concocted. It is a robust editor, and there is room for those creatively inclined to experiment with for some truly unique deviations.

By all accounts, Far Cry 5 is an immensely enjoyable sandbox shooter, chocked full of surprises and a solid story that engages and absorbs. It is stellar when the well-written villains enter the fray, and brings the already awesome action and violence the series is well known for to the forefront. It may not have fully shed the shackles of the Ubisoft formula, but it definitely gave it a good try, and just like the people of Hope County, all Far Cry 5 needs is just a little more push to become an even better game.

A more focused Far Cry than ever before, it just needs a little bit more to make it a truly must-play game. 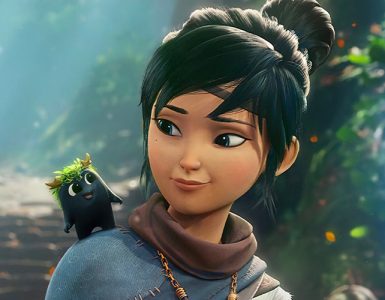