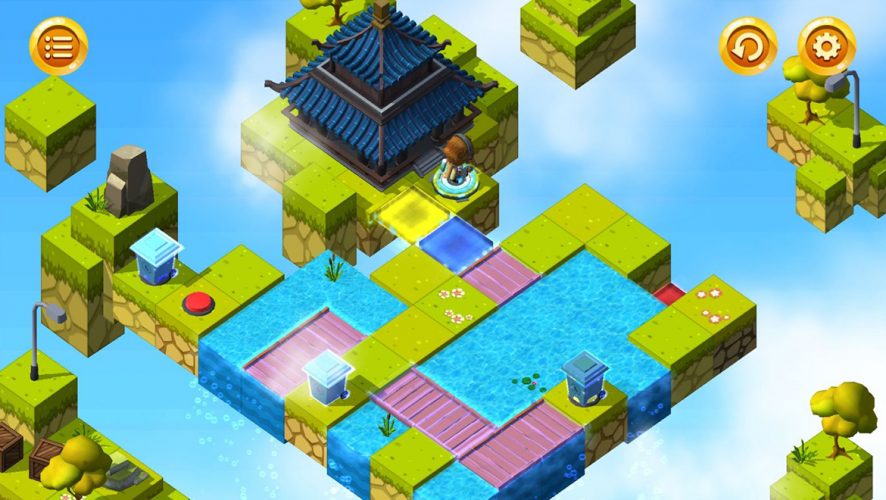 Back in 2015, SUTD Game Lab demonstrated their expertise of the puzzle genre through Singapore’s first PlayStation 4 title One Upon Light. An innovative shadow-based game, it features a photophobic protagonist who has to manipulate objects in the environment to create a path of shadows.

Needless to say, players are greeted with intriguing puzzles at every turn of the game as their problem-solving skills and intellectual prowess are put to the test. Gradually, One Upon Light became known for its unique narrative and perplexing conundrums.

As it turns out, that isn’t about to change anytime soon.

Meet Kinetikos, an upcoming project helmed by a brand-new team that explores the push-and-pull mechanics of gravity. Following a lab experiment gone wrong, the player is thrust into a world of floating isles and blue skies, while attempting to navigate through the strong in-game gravitational force field.

For a dash of nostalgia and customisability, a level editor is included as well, where different puzzles can be shared among players. Whoever said solving problems must be a monotonous chore?

While Kinetikos is pretty much still in development, progress seems to be on the right track. It takes on a Portal-esque approach, in which one has to interactive with objects, and bend the laws of physics in various creative ways. A tapestry of vibrant and colourful art, the game also features mobile-specific elements, with sharp graphics and smooth gameplay to boot.

And speaking of gameplay, the in-game puzzles are shaping up to be fairly difficult, so they should serve as healthy brain workouts for those who relish a good mental challenge.

SUTD Game Lab’s new game is slated for release in the first quarter of 2018 on both Android and iOS – a logical choice, given how mobile gaming slowly becoming a norm in Singapore. With refreshing additions to an age-old concept, Kinetikos may just end up making a name for itself in the consumer market.