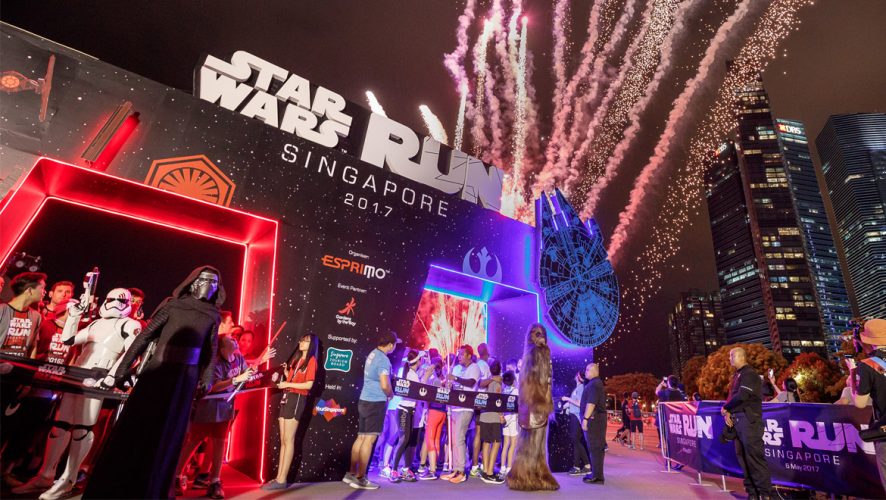 We demanded it and after years of hoping, Disney finally rewarded Star Wars fans with Singapore’s very first Star Wars Run, held on 6th May during the May the 4th weekend.

And over 15,000 fans filled Gardens By The Bay, as they preselected their Dark Side or Light Side allegiance, to run either the 5km or 10km route.

Yes, response to the run, like Star Wars: The Force Awakens, was overwhelming and registrations for the run were full. I managed to sign up for the 10km pack which costs S$75, and included a race pack consisting of a Yoda plushie, a Star Wars Run T-shirt and towel inside a draw string pack. There was also a personalized number tag and some marketing collateral. On the actual date of the run, I arrived at the start point at Marina Bay Sands at about 6.30pm. There were already a few competitive runners doing their stretching warm ups, and they seemed serious to attempt to win the S$1,000 prize money for being the first to complete the run. Slightly behind the competitive runners were the general public decked in the run t-shirts. I noticed that some friends and couples had to be separated by barricades, because they chose two different sides. No fraternising folks.

Just before the race, there was a mini-fireworks display synced to the tune of the Star Wars theme, which was a surprise to many runners. However, the fireworks were launched too near the runners and some of the burning ashes from the fireworks actually landed on me. 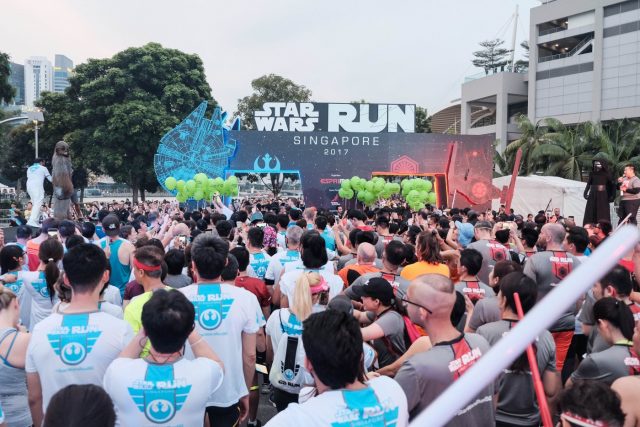 Chewbacca and the man who killed his partner, Kylo Ren, made an appearance to start the race, and work the crowd. Also, there were pacers with balloons for runners to manage their run timings. The race was flagged off promptly at 7pm. 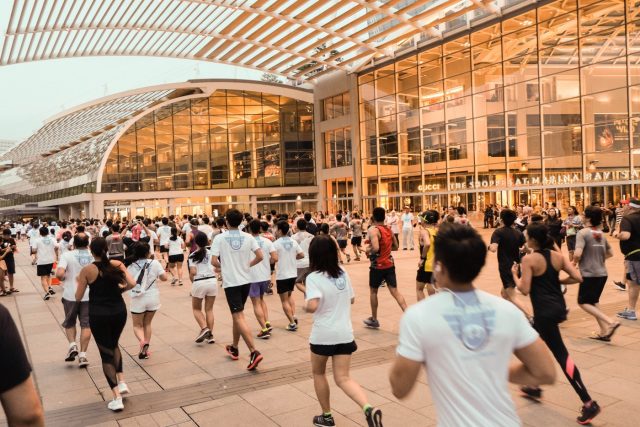 The 10km route would be a scenic one where runners will get to view several landmarks such as MBS, Supertree Grove, the Flower Dome, Marina Barrage and the Singapore Flyer. At the start point I noticed there were many people who really took the effort to run or jog, instead of just walk. What? I’m just here for my medal. 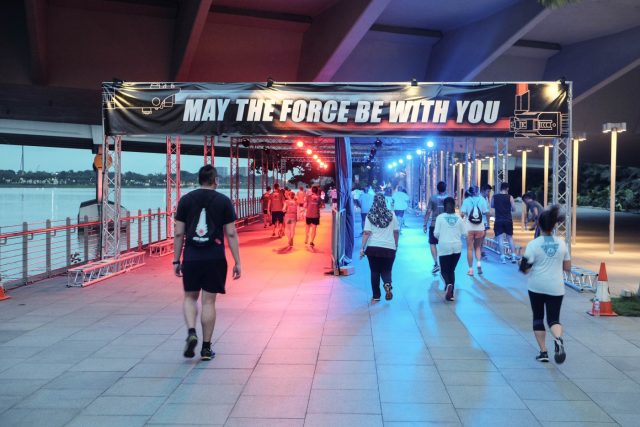 Several lighted gantries were placed along the route for runners to run through, adding to the atmosphere of the run. 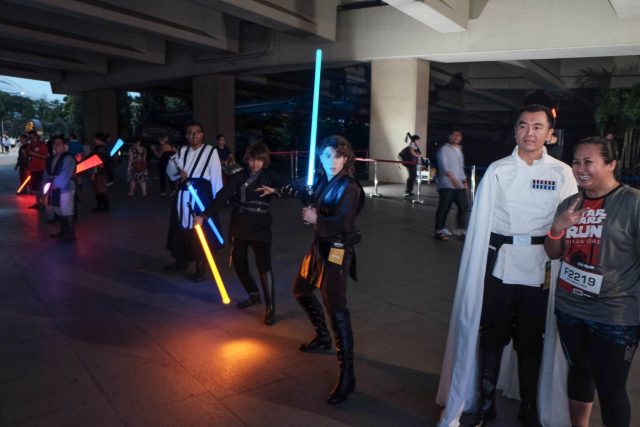 A few Jedi and Sith Lords waited along the route and cheered on the runners. They were very well received as runners also stopped by to pose for photos with them. 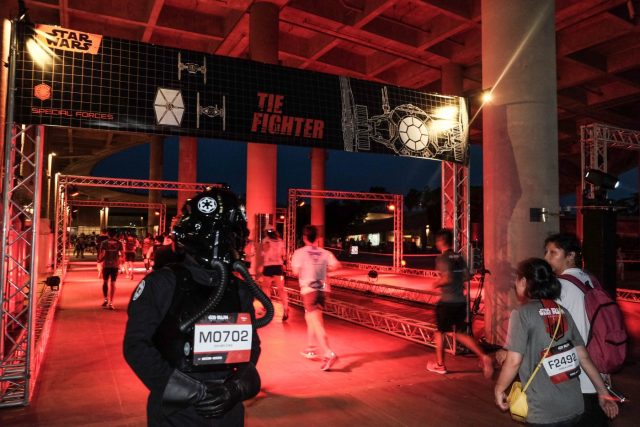 Of course, being a Star Wars themed run, there were runners dressed as Star Wars characters. Along the way, I saw quite a few Darth Vaders and Princess Leias. Some ladies also tied their hair to be like Rey’s triple bun hairstyle. The most impressive one was this Tie Fighter Pilot, who was definitely pretty fly for a Tie-guy. 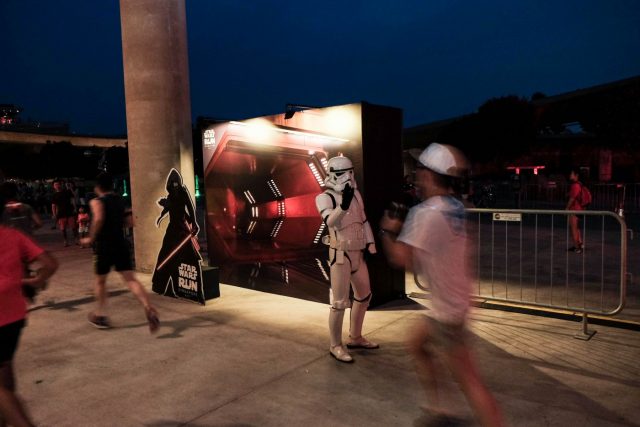 At the Marina Barrage, a friendly Storm Trooper gave hi-fives to the runners. There was also a Kylo Ren standee for photo opportunities. 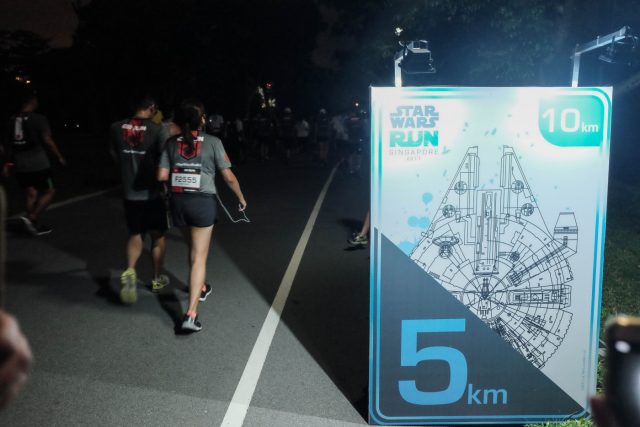 Along the route, themed standees where used to mark the distance runners have travelled. Each marker had a different design. There were water stations along the way, where coconut juice and water were given to the runners. 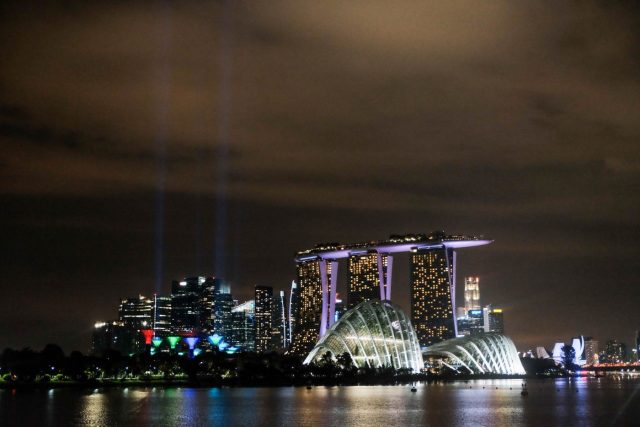 The view was spectacular at some parts of the route were we could see the Super Trees lighted up as Light Sabers, and hear the Star Wars soundtracks, even from afar. 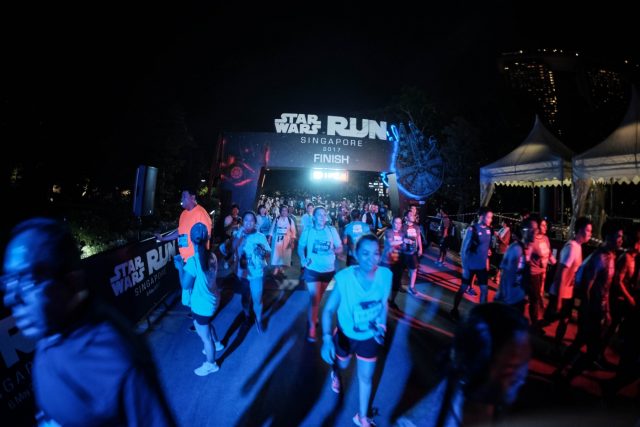 Before I knew it, I managed to see the finish point. As usual, they were many runners stopping for a selfie here. The medal collection point was quite an experience. There Run Crew were cheering and praising the runners as they collected the much coveted run medal. 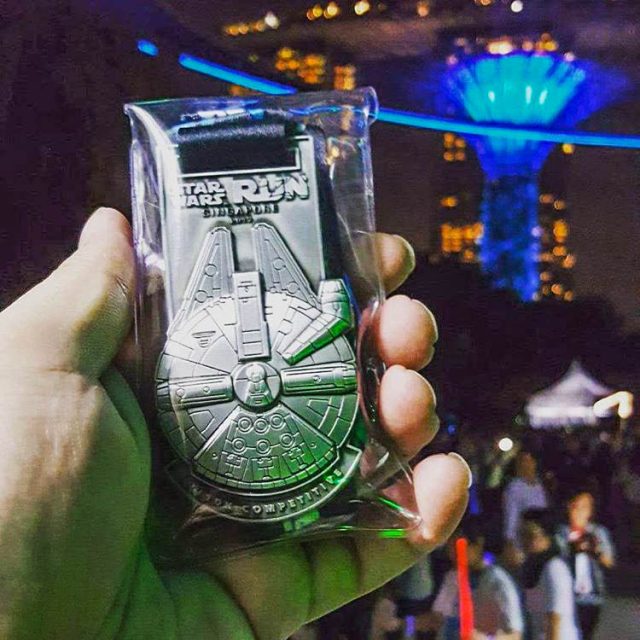 For completing the 10km light side route, I received a Millennium Falcon medal. Overall, I was impressed by the run especially on the logistics side. There were proper bag deposit areas, sufficient ushers and water points. The route was scenic, and there were many Star Wars characters along the route, resulting in an awesome Star Wars Experience.