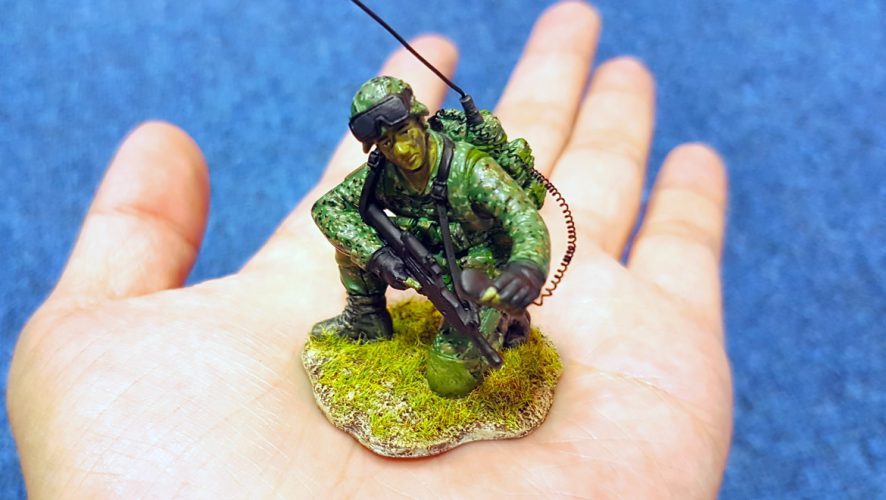 It started with one section of a Singapore Armoured Regiment platoon, and now, Miniature Stories, the local start-up that is turning local soldiers into 60mm steel replicas, has added more soldiers to their ranks.

First up, the PC Runner. Yes, we know. The PC Runner is much like the Platoon Medic – they play a vital role in the operations of a fighting unit, but they don’t get the same fame accorded to them compared to say, the 2IC, M203 or SAW Gunner.

Co-founder and ex-Armour Infantry Caleb Lin has given the PC Runner his due recognition as the most recent addition to the SAR series, and he looks wonderful. For those of you who have served and are dismissive of the runner, let’s see you chiong sua with a signal set each week.

And here’s a soldier that every Singaporean recognises – the Mobilisation, or Mob Man. He’s the silhouette flashing on TV each time there is a mobilisation exercise, so why not put a face to this icon? For the first time, Miniature Stories is revisiting a relic of the not so distant past – a 2G soldier with the classic M16, previous generation SBO, helmet and uniform.

He is depicted in a standing-hip firing position, which was later adopted as the quintessential call sign for open mobilization exercises broadcasted on various media channels.

So what makes this figure so special? The skeletal battle order depicted here is Caleb’s very own SBO! Noted co-founder Terra Chua, “When Caleb first saw the prototype, he was grinning from ear to ear as it brought back some fond memories.”

Another tribute to the SAF’s rich history is the Original NS Man, aka the First Generation (1G) Singapore Armed Forces (SAF) Soldier. Easily identifiable in his Temasek Green uniform, this uniform was introduced in 1967 and has two pockets for the shirt, and three for the trousers. He comes with the L1A1 SLR (Self Loading Rifle), and FBO (Full Battle Order). 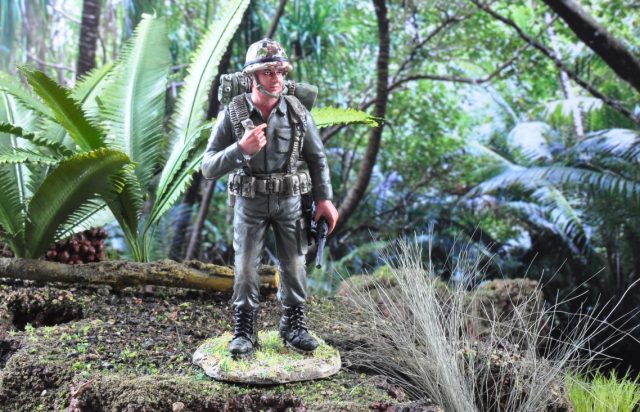 Instead of focusing on another army unit though, Miniature Stories has moved towards the parade square with a selection of soldiers in marching poses, both front-facing and right-facing.

Dutifully aware that a mix of Singaporean males enlist for National Service, the company has ensured that the majority of the races and army units have been covered, by offering each one in 3 races – Chinese, Indian and Malay, and each are available in 3 beret colours – khaki (Guards), green (Infantry) and black (Armour). 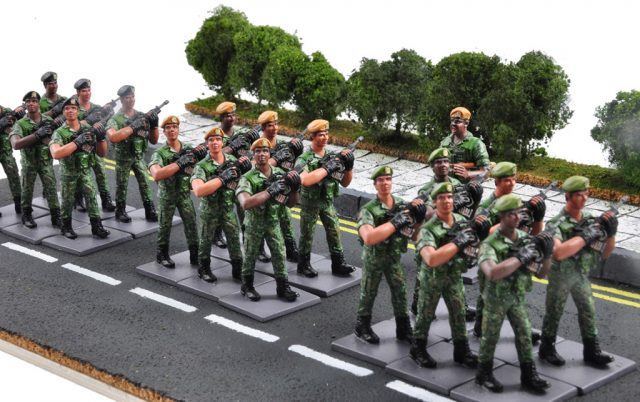 Since the figures are fully painted by Miniature Stories, the regimental badges colours are also customisable, and customers can pick from Armour (duh), 2 PDF, 3rd Div, 6 Div, 9 Div, Combat Engineers, Commandos and Guards. 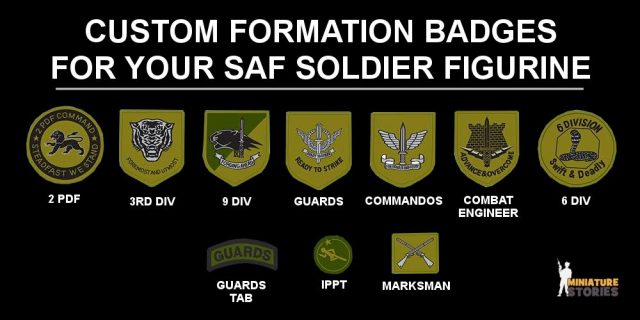 The ability to do personalised arm badges was also something the customers wanted, as a reflection of their own personal NS journey.

“By popular request, we created a set of decals for the main formations in SAF, as well as the marksman and IPPT badges. Now, our customers can customise their soldier figurines to the unit they were from,” noted Terra.

And let’s not forget that one person who makes a battalion work. No, it’s not the CO. It’s the RSM and if you’ve served, there are only two common types – the Indian and Chinese RSM, with a pace stick, and available in 3 beret colours, to muster up the parade!

In fact, one of these was used recently by a group of men who had gone through MR over a decade ago, but still meet up from time to time. They presented the RSM figurine as a present to their Encik from back then, and told him that the figurine represented the Encik that they’d always remember him as.

“That was really heart warming and encouraging for us. As a small start-up, the going is tough. But seeing the happy smile on their Encik’s face when he received the figurine, made it all worthwhile. It reminded us of why we went into this business in the first place – to create keepsakes that reminisce your NS days,” said Terra.

All of these form a combination that brings about 24 unique figurines, and even if you are not planning to get one to commemorate your time in National Service, what about when you MR? Or about presenting it as a gift to someone you know who is just starting his NS?

According to Terra, the decision to roll out so many permutations of a soldier proved to be a huge challenge, “but we really wanted to go all out to showcase our soldiers in multiracial Singapore”.

Feedback from customers also prompted the company to introduce pin badges, with 4 featuring soldiers in action, and another 4 with classic army phrases.

“They are fun souvenirs of the different classic sayings that your BMT Sergeant used to scream at you. So far, they have been very popular, so we’ll definitely be adding more designs next time.”

Last but not least, the company has also completed three Standard Obstacle Course stations that all NS men love. And these 3 aren’t just the Low Rope, Low Wall and Corridor, but they also come with one figurine. For the old guard who have no idea what the Corridor Obstacle is, don’t fret. This is something new that was adapted from 2011 and the company says it is working on releasing ALL the rest of the SOC stations past and present, in the future. 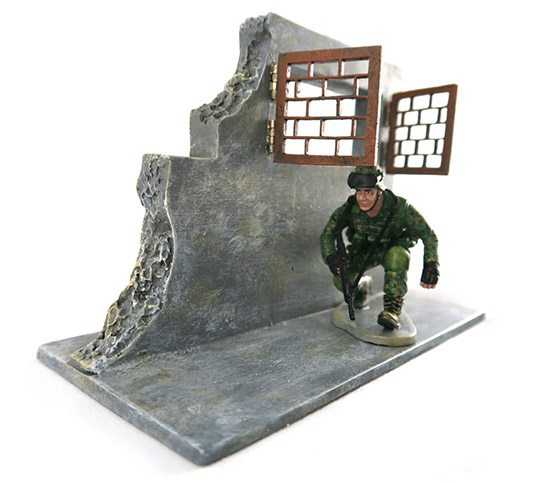 Swing Trainer aka Monkey Bar, you were a bitch when we first met, but we conquered you! Horizontal Beam and Swaying Bridge, we’re looking at you.

So what’s next? Well, that accolade goes to the the Commandos, and they will be available in their No. 1 uniform sometime in June. Check out this sneak peek.

And for those who want a representation of a fully operational armour unit, the team is currently working on its first armoured vehicle, the SM1 tank, slated for release by the end of this year. Don’t fret though, as the Ultra APC vehicles are next on the calendar. And after that, a full section of 2G soldiers to complement the SM1 and Ultra vehicles.

The company does have plans to miniaturise the entire SAF, from the medics, the highly sought after GPMG team, and other vehicles, as well as other vocations, including the Military Police K9 units, artillery, sniper, scouts and combat engineers. 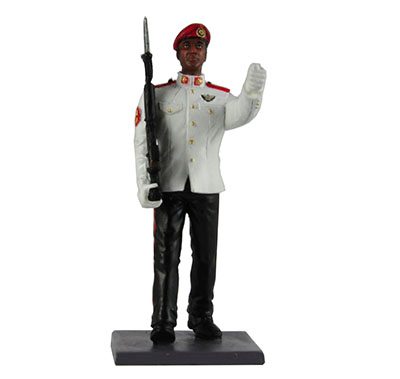