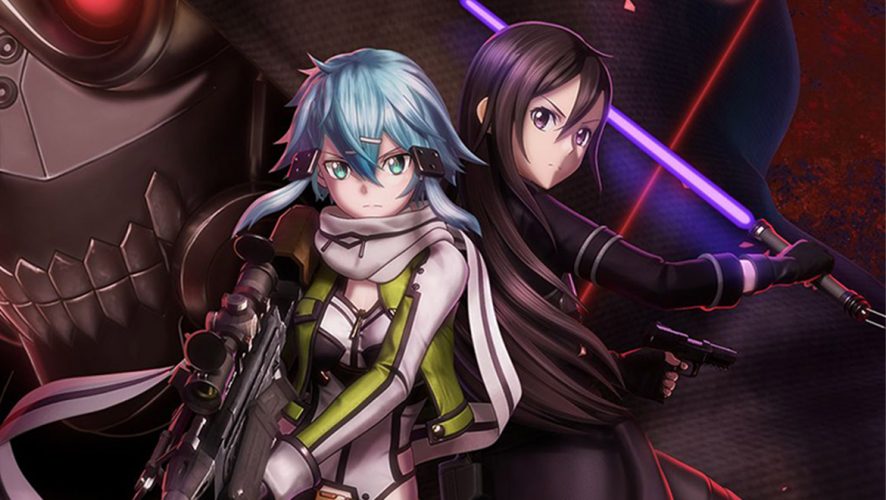 Guns and bullets, in a game series and anime mainly featuring mighty swords as weapons? Yes, that’s right, and it works surprisingly well. Sword Art Online: Fatal Bullet is set in the virtual reality MMORPG universe of Gun Gale Online (GGO), where players compete to earn bounties in a post-apocalyptic Earth. As such, the game is a third-person shooter, a change from the MMORPG-esque genre of past adaptations.

Kirito is no longer the star of the show, as now you play as a brand new character of your own design, a newbie to GGO. The game kicks off with you encountering Kureha, an old friend, as you step out into the capital city of the SBS Glocken, and she guides you through a tutorial mission to learn the ropes.

An accident at a teleport gate sends you to an unknown location where, just your luck, you find a rare and valuable item in GGO – a high-tech humanoid called ArFA-sys who becomes your AI companion. With your mission complete, you return to the SBS Glocken to meet the rest of the Sword Art Online crew and some familiar faces from the anime. 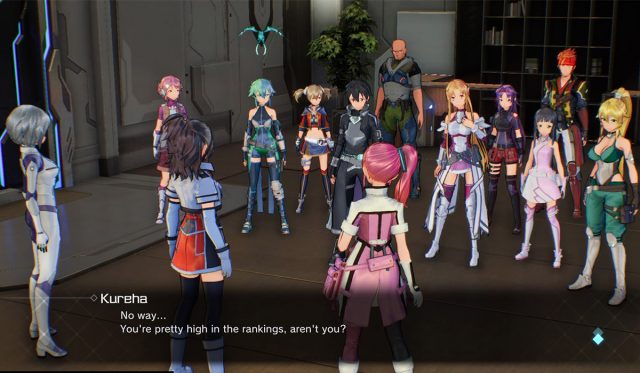 Now here comes the most glaring issue with Fatal Bullet: pacing. You’ve completed the tutorial, you’ve gotten a feel for the gunplay and abilities, you want to quickly jump right into more action right?

Wrong, as Fatal Bullet wants you to sit through a painstaking amount of visual novel-esque dialogue, character introductions, and blocks of text with information about the shop, upgrading abilities, the ArFA-sys, and more.

The choices you make as your responses in conversations don’t seem to have any impact on the outcome. Your character’s personality also feels bland, as everyone is far more interested in your impressive ArFA-sys companion than you.

Skimming through most of the info and pressing skip on dialogue boxes still takes you about an hour after the tutorial before getting to the next dungeon mission. It’s safe to say that reading everything would take players a considerable amount of time, all the while itching in their seats to lay loose and shoot some monsters. 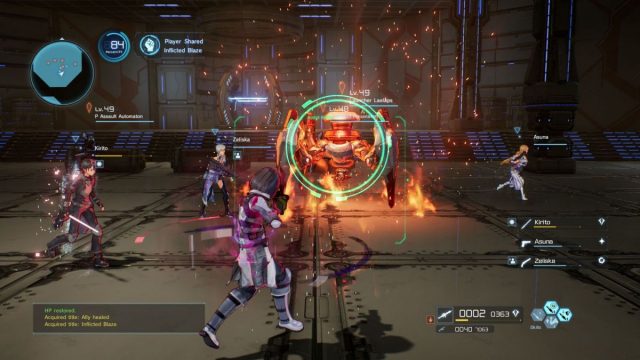 When you do finally get into the action, it’s good stuff. Combat in Fatal Bullet is enjoyable, and the aim assist system is excellent for those less proficient at aiming with a controller. Hip-firing allows you to automatically lock onto targets within the green box, while scoping in removes aim assist and requires some aiming finesse. The aim assist system can also be disabled at any time, giving players the option to hone their skills.

There is a wide range of guns for you to purchase, from pistols to rocket launchers, and your choice of weapon is heavily dependent on your preferred playstyle. Handguns are best for those going for agility and speed, while slower, tanky characters can wield heavier guns like launchers and Gatling guns.

It doesn’t take long to learn the intricacies of a weapon, especially if you choose to use the aim assist system, but once you nail down your playstyle and role it’s unlikely you’ll change the general type of weapon you use.

If you’re not a big fan of guns, rest assured because you can equip laser swords as a melee weapon, and completing chapter 15 of the main story allows you to dual wield a laser sword with a handgun. 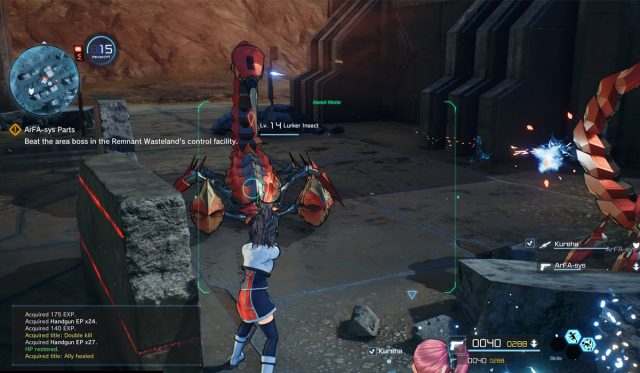 Currency is earned through bounties received by hunting down enemies and finding treasure chests in dungeons, which you will do in both main and side quests. You’ll earn a share of the bounty even if you fail to beat the dungeon’s main boss, so accumulating credits to purchase better weapons is not too grindy a task.

And as great as the gameplay is for your character, the accompanying AI party members are left wanting. They often run around aimlessly, don’t take cover, and get downed easily, leaving you frantically running to revive them. This is detrimental as your allies play an important role, helping damage foes and healing teammates.

You can add up to 3 NPC characters to your party, and a strategic party composition makes defeating the bosses easier. For instance, it’s essential to always have one healer in the group, and characters with the Graviton Bullet skill such as Furikowa help with fast-moving or flying monsters by holding them in place for you to shoot down. 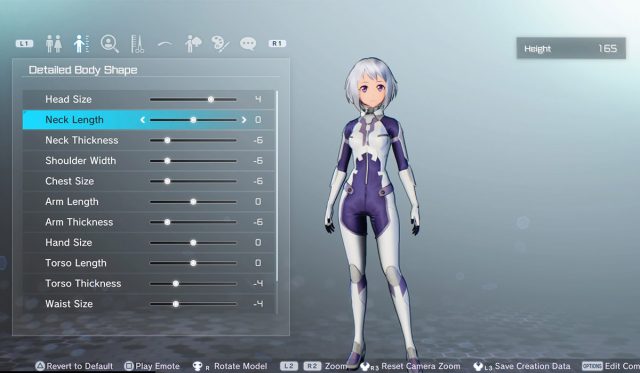 Since you are playing as a custom character, the ability to personalise it is important and Fatal Bullet offers practically a Sims game level of customisation. You get to create two characters in the game – yourself, and your ArFA-sys.

All sorts of body shape and facial modifications are possible, and you can even select individual eye colours. Apart from gender, character creations can be modified at any point of time. The colours of your guns, accessories, and armour are also customisable! This is a nice touch by the game, making the characters more personable. 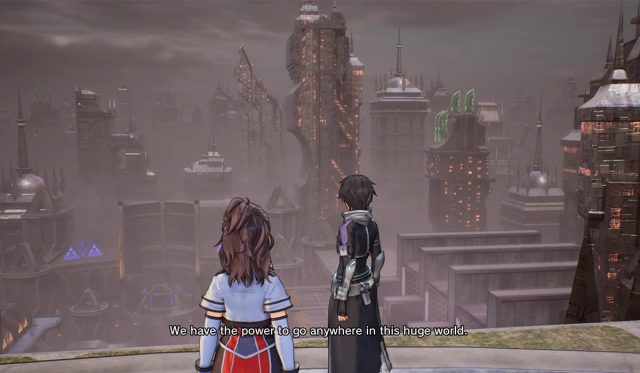 The world design and unique art style of Fatal Bullet paint a vivid picture of the huge virtual reality universe they are in, with the tall skyscrapers of the SBS Glocken, the barren remote wasteland, and abandoned industrial dungeon buildings.

The landscape, however, is unchanging and can get monotonous after a while – the foggy, post-apocalyptic scenery that looks like it’s masked with a sepia tone filter.

The same goes for the quests and dungeons, as the game can feel like quite a grind, repeatedly battling insects and automatons to earn bounty and upgrade weapons and skills, with only a shallow story to carry it along. 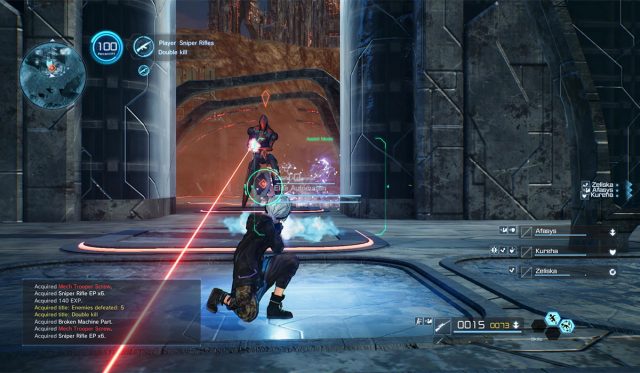 Fatal Bullet is a worthy addition to the ever-expanding world of Sword Art Online, and faithful fans will be glad to know that they can play alongside familiar characters such as Kirito, Sinon, Agil and Klein. As long as you tough your way through the long-drawn introduction, you’ll be rewarded with a satisfying combat experience and extensive upgrade system.

Fatal Bullet is a step towards the right direction in becoming best Sword Art Online game out there, but there’s still room for improvement. A great combat system and vivid graphics redeem the game from its sluggish pacing and unintelligent AI.