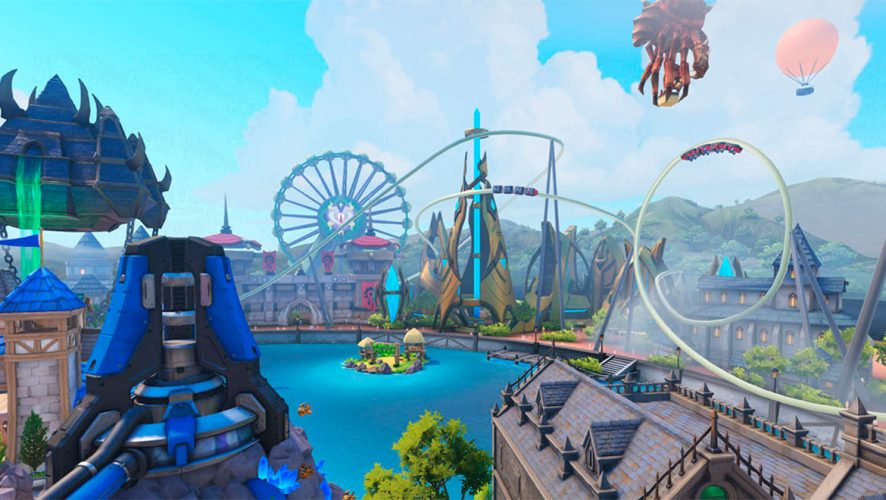 “Welcome to Blizzard World!” blares the familiar, jolly voice of Uther Lightbringer from the overhead speakers as you walk up to the metal turnstile gates of the park entrance. You hand your ticket to the attendant and with a loud “clang”, you push past the gate into a warm Hearthstone Tavern that’s positively buzzing with energy.

You’re finally here, in Blizzard World! Overjoyed, you step outside, taking in the sights and sounds. Screaming passengers whizzing around loopy roller coasters in the distance, Uther announcing park programmes on the speakers, and the music, oh, the music!

How does it all sound so good, you wonder? Credit goes to the brilliant Overwatch sound team, whom we recently had a chat with to find out how they managed to produce an authentic theme park sound experience for players. 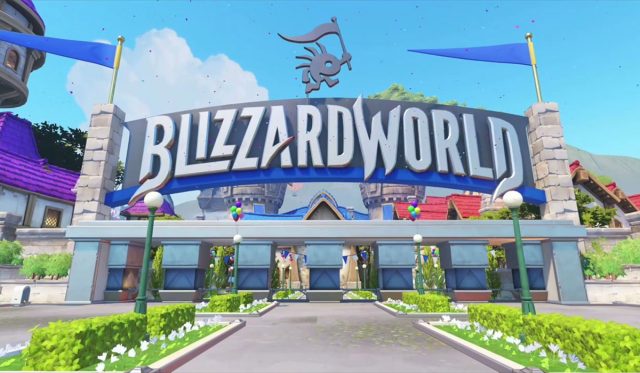 The Blizzard World map was released for Overwatch in January 2018, and pays homage to Blizzard’s other popular franchises – Warcraft, Hearthstone, Starcraft, and Diablo. Each of them have their own dedicated section of the map, with recognizable sounds sourced from the original games to immerse players in the land.

This required close collaboration with other Blizzard games, and the Overwatch team reached out to the other teams for assistance when the map was coming to life.

“For the StarCraft area we had Evan Chen, the Sound Supervisor for that property, come by and we showed him what would be in the map and worked with him to come up with a list of assets we could repurpose. For the World of Warcraft area it pretty much consisted of me going through their massive asset library in order to come up with all the sounds we needed,” said Sound Designer Justin DeCloedt.

Senior Sound Designer Chris de la Pena added, “I worked closely with Kris Giampa, the Sound Supervisor for Diablo in picking the right sounds for the Diablo area of Blizzard World. Kris was instrumental in helping me select the various ghouls and creatures we randomized in audio emitters strategically placed throughout the Diablo section of the map. The Diablo 3 sounds were so good, we barely had to process any of them before putting them in!”

Sounds bites from the various games aren’t the only things that gives each area its distinct flavour. As you walk around, you’ll notice that the theme music changes and flows seamlessly from one section to another.

Listen to the videos with earphones/headphones for the best sound experience!

A fly-through of Blizzard World: Notice the music flow.

“A lot of work went into making the park music feel natural and seamless,” said Paul Lackey, the Sound Design Supervisor. “To manage the music flow and the fades between the different outdoor areas, we needed to have a slightly wider gap between speakers as you move between the zones. That way the music would just be fading away as you start hearing the next area’s music.”

It isn’t just the open outdoor areas that have music though, as many indoor shops and rides have their own music and the team had to prevent outdoor music from bleeding in.

“We fixed this by giving the indoor and outdoor spaces their own “mixes” so that you can only hear the speakers that are supposed to be heard depending on the space you are in.” 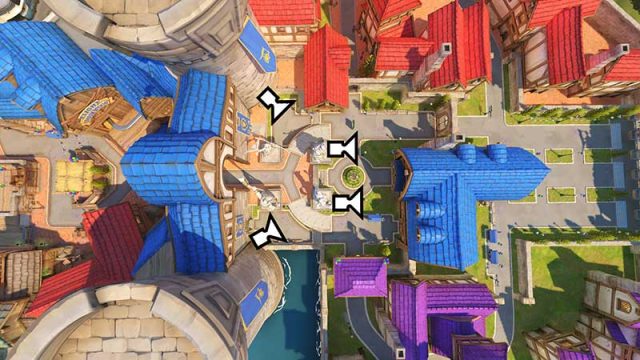 But prior to Blizzard World, Overwatch lacked the tech to synchronize music coming from multiple speaker sources, so the team had to start from scratch.

“I began making top down views of the various parts of the park and drawing in speaker locations that would project the correct way, provide the needed coverage, and not bleed into unwanted areas.”

“Once we got the tech we needed, the final speaker locations were tuned and then our environment art team went in and made the speakers look like they are camouflaged into the park’s walls and buildings, just like in real theme parks,” explained Paul.

You must be this tall to ride

Another way the team added to the realism of the soundscape is through all the other iconic sounds you expect to hear in a theme park.

“We obviously wanted to tackle any sounds relative to theme park rides such as gears, cranks, hydraulics chuffing, turnstile gates, roller coaster cars on tracks, as well as the rides with passengers screaming on them,” said Senior Sound Designer Geoff Garnett.

The screams aren’t random either, watch carefully and you’ll notice that they are even in-sync with the roller coaster drop.

Blizzard’s headquarters are located in Irvine, California, so the team fortunately has access to many Southern California theme parks, one of them being Knott’s Berry Farm.

What better place to record sounds of a theme park, than an actual theme park itself!

“With the help of a close family member, we were able to visit the park before it opened to record the test runs of the rides, before the park music was turned on. This allowed us to get very clean and authentic recordings of the rides in a nice quiet environment. While we went there primarily to record the rides, we were also able to record backstage machinery, various pneumatic devices and even a couple of squeaky metal gates,” described Scott Lawlor, Project Audio Director. 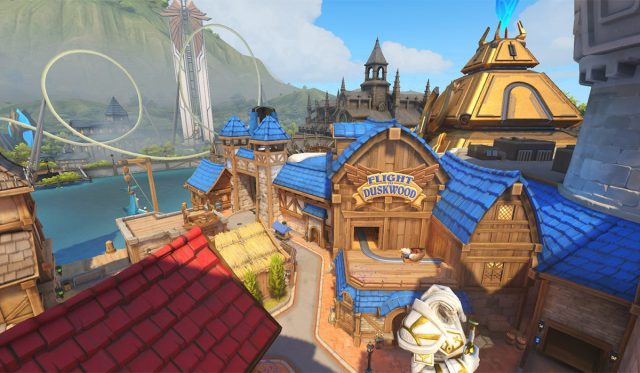 When asked about the sounds that were challenging to record at the park, Geoff responded, “I think one of the most difficult scenarios for us was recording an old mine cart ride. The attraction has all kinds of great sounding animatronics, steam, levers, and the carts themselves sounded amazing on their respective track.”

“The catch was that the ride had its own soundtrack that played over a PA system, so it was tricky to coordinate running the ride without all the speakers on. We had a very small window of time to run the ride before the park opened, but the staff was very helpful and we were able to pull it off.”

And it’s a good thing that they managed to pull it off, as these recordings were used for the Flight to Duskwood ride in Blizzard World. Players can go for a joy ride on a gryphon during a match, which may be fun, but is not advisable! Take a listen at the sounds of Flight to Duskwood.

Reign of the Black King

The Diablo area was a personal favourite of Chris de la Pena, whose experience working on Diablo 3 helped with selecting the best sounds to reflect the eerie atmosphere and huge opening chamber of the area.

“The basic background ambience was taken from one of the Diablo 3 Cathedral areas where you battle through on your way to fight the Skeleton King. So not only is the ambience appropriate for the size, but it also stays true to the Diablo 3 lore.”

“If you walk past the entrance of the Diablo area there is a deep steaming pit. I placed an audio emitter of some ambient sounds I created for the Abattoir pits in Westmarch, found in the Diablo 3 expansion Reaper of Souls. The sounds reflect an ominous hot breeze coming from the unknown deeps of the pit. I also used audio emitters for randomized creature sounds you might recognize from different areas of Diablo 3.”

With the ambient sounds settled, the team didn’t forget to pay careful attention to the little details.

“A few more of sounds I had a blast implementing in the Blizzard World Diablo area are the torches and urns, which you can hear crackling as you pass by.”

“One last thing,” added Chris, “if you by chance pass by one of the lore books in the area, go up to it and listen. You just might hear the ghost of Deckard Cain scribbling notes and turning the pages!”

And pass by the books we did, to stay awhile and listen.

After checking out that little Deckard Cain hint provided by Chris, we knew there would be plenty more easter eggs hidden around the map. However, when we probed for more clues, Scott remained hush-hush, not wanting to reveal too much.

“There are many easter eggs scattered throughout Blizzard World. I don’t want to give too many of the secrets away, since half of the fun is finding them. The best way to try to find them all is to start up a custom game, and spend some time running around and listening for the little details.”

Well then, what else is there to do? We loaded up a custom game, and went hunting for some hidden sound easter eggs.

Scott didn’t leave us high and dry though, as he dropped this hint, “The park announcer voice over is full of fun surprises. One secret I’ll give you is that to hear all of the park announcer voice lines, you’ll need to listen carefully throughout the entire year! On certain dates, more secrets are revealed.”

We wish we had the time to listen to park announcer lines across a year, but for now, here’s a compilation of some of the voice lines playing in the park at the moment.

Announcements by Uther Lightbringer (voiced by Michael McConnohie), the legendary paladin from Warcraft, can be heard on speakers in the Hearthstone Tavern and around the Stormwind Castle.

Apart from reminding you to remember where you’ve parked, he makes delightful references to Warcraft, advertises park events, and makes a stern warning: “Please do not disturb the peasants.”

Similar announcements are made by Diablo’s Deckard Cain (voiced by Michael Gough) in the Reign of the Black King section. He says his signature quote (you know the one!), and woefully remarks that “no one ever listens.” He also makes neat Diablo references to Wirt, Leah, the Prophecy of the End of Days, and more.

Are there more sound easter eggs that you’ve picked up in the park? This is definitely not all the voice lines there are out there, so create your own custom game and have a wander around to see what you can find.

Big thanks to Justin, Chris, Geoff, Scott, and Paul of the Overwatch sound team for taking the time to share with us! Their hard work on sound design has resulted in a wonderfully immersive Blizzard World theme park, and we look forward to hearing the sounds of the next destination they send us to in subsequent Overwatch maps.