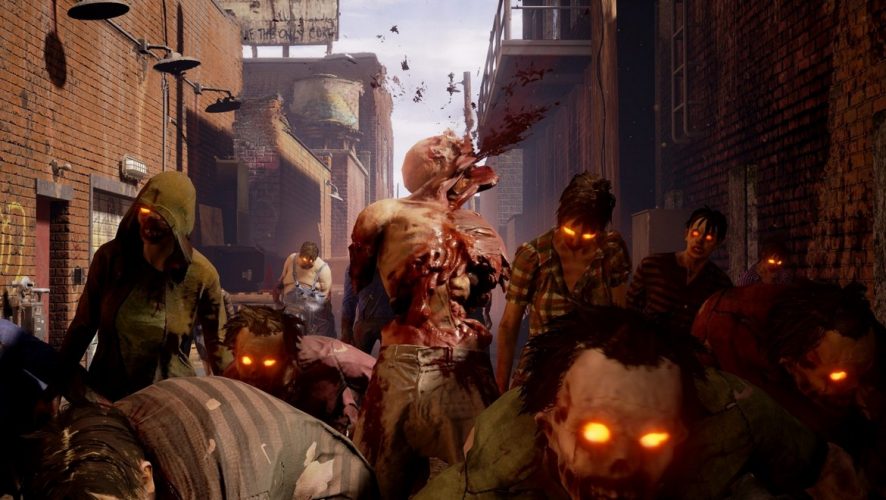 A zombie apocalypse is a familiar trope, but everyone knows that people are the real monsters in such scenarios, and in State of Decay 2, there are enough of both to warrant a fun, if not frustrating time.

You do not survive an apocalypse alone, and this ethos runs deep throughout State of Decay 2. Much like the first game, players are not just a single entity, instead, you play as a community. Collecting the various survivors like you do resources, these randomly generated characters form the cornerstone of survival, each bringing a set of skills and quirks to the table.

With the community being an integral part of the experience, it is no surprise that developers Undead Labs have drawn from a deep well of randomly generated goodness to flesh them out and give you more incentive to keep them alive.

Interesting backstories are a dime a dozen, and they are voiced well to boot. And be glad that they are, for you will be spending much of your time caring for their needs and wants, and not hearing the end of it as they bug you about it. Aside from food, medicine, ammo, and construction materials, upgrading your base with facilities like more beds or an infirmary are part and parcel of the State of Decay 2 experience. 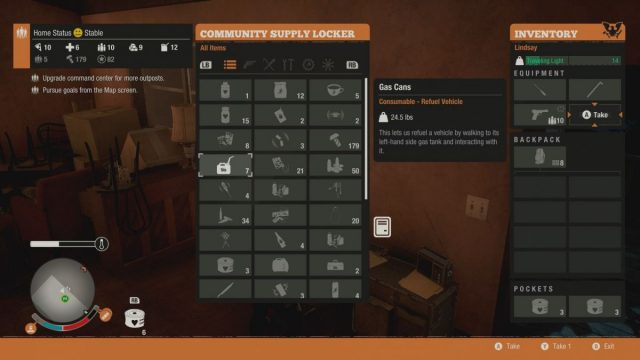 Your stockpiles will never be enough, at least at the start, and if it is not your people using too much, it is the facilities’ upkeep and crafting that can leave you teetering on the edge. Venturing out into the world becomes an unavoidable task, and it is where the meat of State of Decay 2 lies.

With several maps to slowly ramp players up, you will not find sprawling urban settlements, but remnants of small-town America. Clusters of small buildings are littered around the surrounding areas, with diners, gas stations, barns, and corner stores being the most common. They form the bedrock of survival, housing precious resources and items that can be used or traded for the game’s other important resource, Influence. 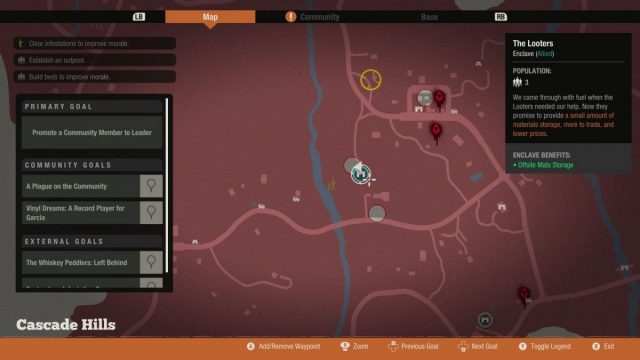 Influence can be used to establish new home bases, outposts, trade, as well as call in commands via the radio. Need a certain resource but have no idea to find them? Tap on the radio and you will be enlightened in no time.

The searchable areas are also where the most danger resides. Do you go through the buildings methodically and slowly, or are you here for a quick ransacking at the risk of drawing the attention of the shambling dead? The inherent risks are only heightened by your finite inventory space, as well as the limited combat ability of your character. 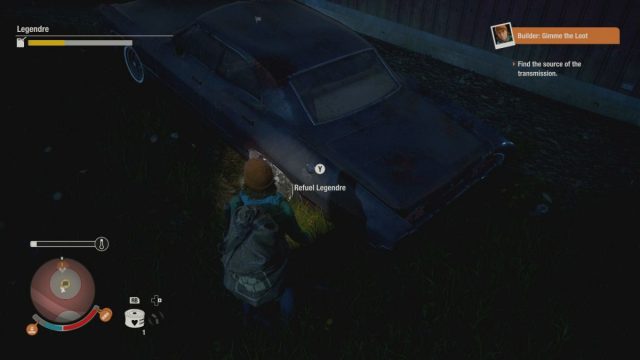 No matter how great you are at fighting, the overwhelming numbers of the zeds will wear you down. And with a dwindling pool of stamina, there is only so much you can do before you can no longer resist. Headshots work wonders, especially against the Freaks. Screamers and Bloaters go down easily enough, but the Ferals and Juggernauts provide more of a challenge.

Get caught in a horde and you are in trouble, and when a Freak joins the fray, permadeath seems more an inevitability. Once more, there are no heroes in the land of State of Decay 2, only survivors, and running or driving away are always options. 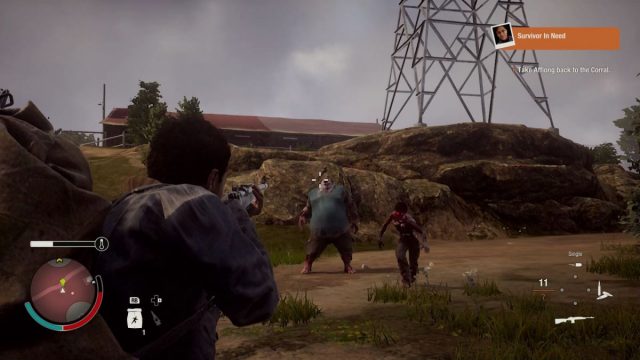 Fatigue, injuries, and even the new Blood Plague are further impediments to your group’s wellbeing. The game wants you to cycle through the many members of your community, and rightfully so, since they each have skills that can be upgraded through frequent use. Hone your fighting skills, scavenge enough supplies, and even run enough and your survivor gets better at each aspect, allowing players to specialise in several branches that can bring a variety of benefits.

Perhaps you like the bladed weapons, get good enough and you will unlock a leg sweep that cuts off the legs of the zombies. Or unlock the option to carry more, run further, and be less affected by fatigue. It is truly awesome to see a community made up of diverse people with different sets of skills, all working towards making surviving less of a chore. 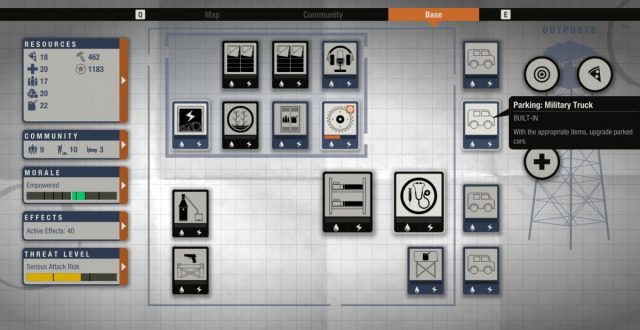 However, once your crew staffs up and become more useful, the game does little to throw you more of a challenge. I have not lost anyone throughout my time in State of Decay 2, and any experienced campaigner will hardly break a sweat if they take the time to build up supplies and the community. Hopefully, we will have a more challenging mode coming our way soon.

And if going alone is not your style, you can fire off a flare and up to three people can join your game at any time. The downside is that you have to stick relatively close to one another, or risk being forced back together. There are also issues with lag and delay, which can often prove dangerous when facing the zombies.

If you are joining someone’s game, be aware that while you can still improve your skills and gather more influence, the true benefit goes to the host. After all, you are helping them out by finding supplies and keeping the dead at bay, so consider it a work trip rather than a true co-op experience. 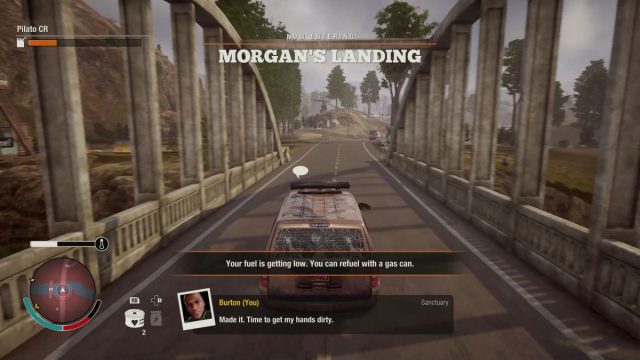 Other bugs rear their ugly heads once in awhile. Floating zombies in the skies are commonplace, and getting vehicles stuck in the scenery can often lead to frustrating and long treks back to base, or even death. A military vehicle that was one of the best transports around would flicker, and only stayed intact at full health.

It is curious why the developers gave players the “Get Me Unstuck” command in the menu, but based on the current state of the game, it is understandable, but ultimately disappointing.

If you are into the whole zombie apocalypse genre and love gathering resources and building up a community and its people, State of Decay 2 is everything you can ask for in a survival game. There are large areas to explore, interesting people to find, and plenty of trouble to get into, and while not everyone gets to live forever when the zombies come around, but it sure can be a hell of a fun time.

A good, competent survival game that builds on the original, State of Decay 2 has plenty to love, but also plenty to improve on.