I first heard of Lilly Looking Through when it was still a Kickstarter project looking for backers in June 2012. That it was a point-and-click adventure first caught my attention, the hook was when I saw the art. I watched the introduction video, played the short but beautiful, immersive demo and knew that I had to help this game become reality. So did 1,622 other people it seems, who all backed the project and helped developer Geeta Games raise US$33,516 – way above their US$18,000 goal.

After many months of anticipation, I once again enter Lilly’s enchanting world, where we are introduced to our heroine and her little brother, Row. The story is a simple one, as Lilly sets out to rescue her brother from a mysterious red scarf that has spirited him away. She finds a pair of goggles, through which she is able to toggle between past and present, and thus her adventure begins. The role of the player is a sort of companion, who helps Lilly to navigate and figure a way through each scenario in pursuit of her poor little brother, who calls out to her as he is swept away yet again by his captor. Each scenario is a beautifully painted landscape with puzzles you must solve in order to proceed on to the next stage. The art, music and remarkable voice acting combine to create an enchanting setting, each new scenario as charming as the last. I really like that the alternate reality Lilly sees through her goggles is really toggling between the past and the present, and how her actions in one have a direct effect on the other. I’m also impressed at the strength and agility of this little girl, whose rope climbing skills put most of us to shame.

The scenarios start off easy enough as you get the hang of the gameplay, and progressively become more challenging as you get deeper into the story. The puzzles are challenging yet not unreasonably difficult, and in later stages the sense of achievement I got after I solved a stage was reminiscent of the days I spent hours on LucasArts masterpieces like Monkey Island (which is still my favourite adventure series of all time). 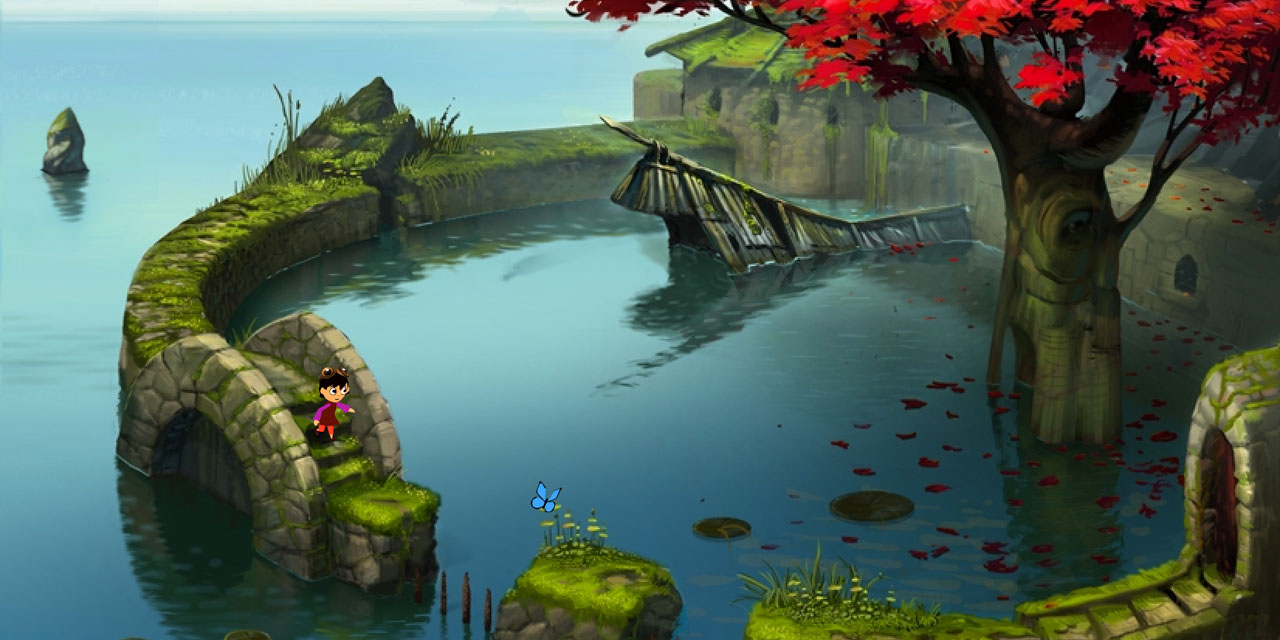 For those of you who love exploring on your own, be warned that the game is very linear, and the interaction options you have are limited to clicking on the specific items or areas needed to solve each puzzle. While this clearly highlights the elements you need to work with, I would have enjoyed it more if I had some leeway to do a bit of wandering about in each scenario, even if it was just walking around to take in the scenery. Each click triggers an animation of Lilly carrying out an action, and while very pretty the first couple of times, if you’re stuck at a stage it gets frustrating having to watch Lilly climb that ladder or swim to the rock at the bottom of the lake for the 10th or 20th time. If I could make just one modification to this game, it would be to enable the skipping of these animations.

All in all, Lilly Looking Through is a beautiful game with some clever gameplay mechanics that fans of point-and-click adventure games will enjoy, so I do encourage you to check out the trailer above and give the demo a try.

This game is a great first offering from Geeta Games and I’ll definitely be looking out for their next project.

Lilly Looking Through is out on 1 November 2013 (US time) on Geeta Games’ website, Steam, and GOG.

A beautiful game with some clever gameplay mechanics that fans of point-and-click adventure games will enjoy.