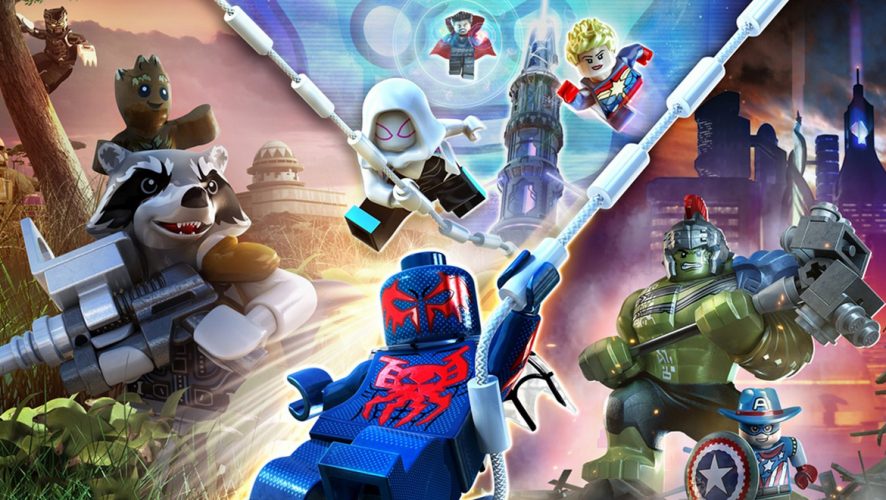 Traveller’s Tales takes us back to the Marvel playground for their latest LEGO game, and they went on a very deep dive into Marvel lore for it, combing not just the MCU films and current popular characters in comics, but nearly then entire breadth and width of Marvel Comics history. Excepting of course the X-Men and Fantastic Four.

“Can’t you just be a friendly neighborhood Spider-Man?”

But we do at least get Spider-Man. In fact, we get like 10 of them. Thanks to this installment’s big bad, the time- and dimension-traveling Kang, a bit of Manhattan is plucked from Earth and inserted into a patchwork city that Kang calls Chronopolis. Chronopolis includes bits of other places, times, and dimensions, including Asgard, the Old West, Xandar, Ancient Egypt, and four different New Yorks. This means TT gets to cram in multiple versions of various fan-favorite characters, like Captain Avalon (the Medieval England version of Captain America), Spider-Man Noir (from Manhattan Noir, natch), and yes, even Throg (a frog Thor). 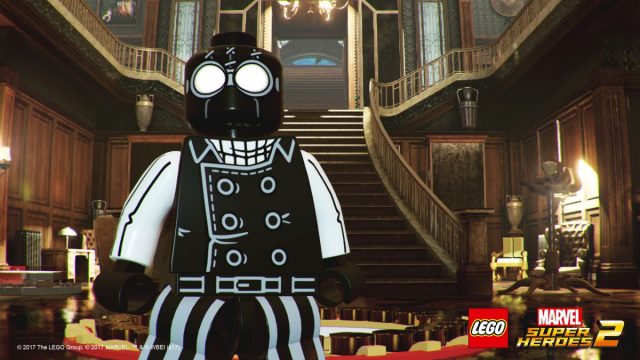 The main game includes 20 all-new levels in which you encounter MCU versions of various characters and locales (which makes sense as the MCU is the most popular thing going right now), but also popular comics characters like Ms Marvel and Spider-Gwen, and some truly obscure characters will test even the most devoted Marvel zombies (how many of you can tell me who the Presence is without looking it up?). Like every other TT LEGO game that has come before, this game contains the usual amount of races, puzzles, hidden collectibles, and ridiculous humour these games are famous for, but free-roaming in Chronopolis is a lot more fun than your usual LEGO maps.

In fact, free-roaming in Chronopolis might be more fun than the actual story missions. Beyond just the fun of exploring all the different locales, there are tons of things to do there. Beyond the mainstays, there are various challenges to complete. A few examples include: 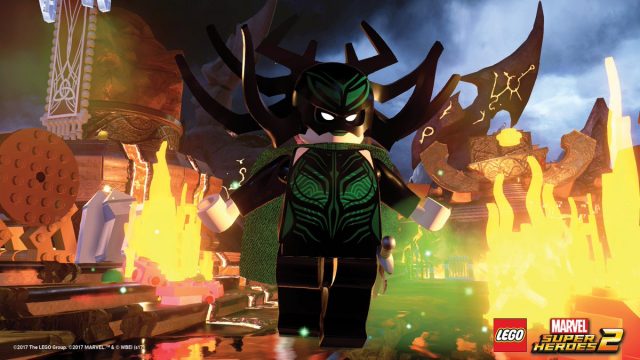 There are 25 of these challenges to complete, each of which awards a gold brick upon completion. This is on top of the various missions, puzzles, Stan Lees, and races that will keep you busy for a good long time.

That said, the story missions are quite fun, especially as they feature an all-new story that will introduce you to the Chronopolis districts, but also take you to places not otherwise accessible, like Siberia, inside a Hydra airship, and the Dark Dimension.

TT have also given us pink bricks instead of red bricks, and they’re presented by Gwenpool instead of Deadpool this time (because we can’t promote any Fox properties, guys!). Beyond the cosmetic change, though, some of the pink bricks are available to purchase right from the get-go, including all the stud multipliers. You’ll no longer have to go searching all the levels, looking for that x2 brick you so desperately need. Now you can just buy it as soon as you’ve got 800,000 studs (which should only take you five or six story missions)!

The Grandmaster’s Battle Arena is another little bit of fun in which you and a friend can duke it out to see who is the better LEGO smasher. Battle Arenas aren’t a new thing (LEGO Dimensions introduced them, and LEGO Ninjago made them even better), but the Grandmaster has something up his sleeve: the Infinity Stones. In this battle mode, you can capture the stones as the Grandmaster flings them into the arena, and use their power to run up your score. 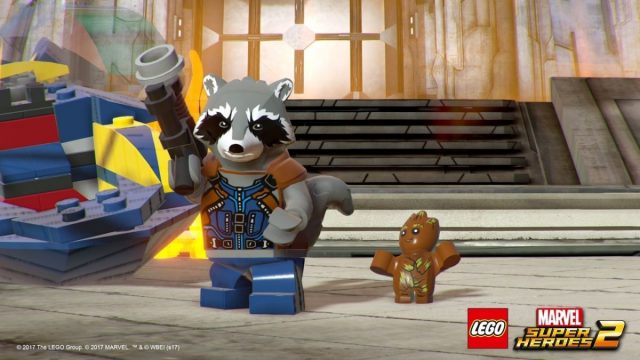 There’s a lot of stuff to do, and a lot of fun to be had in this, but I still very much miss the cover shooting feature first introduced in LEGO Star Wars: The Force Awakens. They really ought to bring that back.

“Thank you for the books and for the horrifying story and… for the threat upon my life.”

Traveller’s Tales continues their pretty top-notch presentation. Their excellent sight gags are still hilarious. And best of all, I haven’t seen any bugs yet! LEGO games have been notorious for having various bugs upon release (including one game-breaking bug in LEGO Harry Potter Years 1-4 that forced me to restart an almost 100% game!). I hope that as I get closer to 100%-ing this game, no bug will rear its ugly head.

The voice acting here is fine and serviceable, and I understand that attempting to hire film actors to record new lines for the characters they’ve popularized would have broken TT’s wallet, but would it have killed them to at least find someone who closely approximated Samuel Jackson or Chris Pratt? It’s just weird to not hear their voices, especially when this game is clearly trying to align itself with the films. 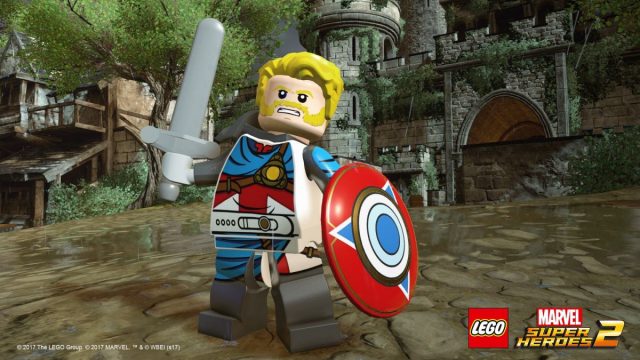 There’s no big UI changes or improvements in this game except in the options screen and pause menu. In the options screen, you can easily flip back and forth between the map, the story levels you’ve completed, and the various challenges that still need completing. And in the pause menu, you can now go directly to the Battle Arena and the character customizer. Best of all, there is now a trading card of whatever character you happen to have been controlling when you paused. This card shows you the character’s history as well as every power they have in-game.

LEGO Marvel Super Heroes 2 isn’t a leapfrog in gameplay or design the way LEGO Star Wars: The Force Awakens or LEGO Ninjago were, but it’s still incredibly fun, contains a fantastic setting, and has no bugs. We can expect no less from Traveller’s Tales at this point.

Traveller’s Tales returns to the Marvel toybox and uses dang near every toy in there for an incredibly fun experience (except for X-Men and Fantastic Four characters because reasons).