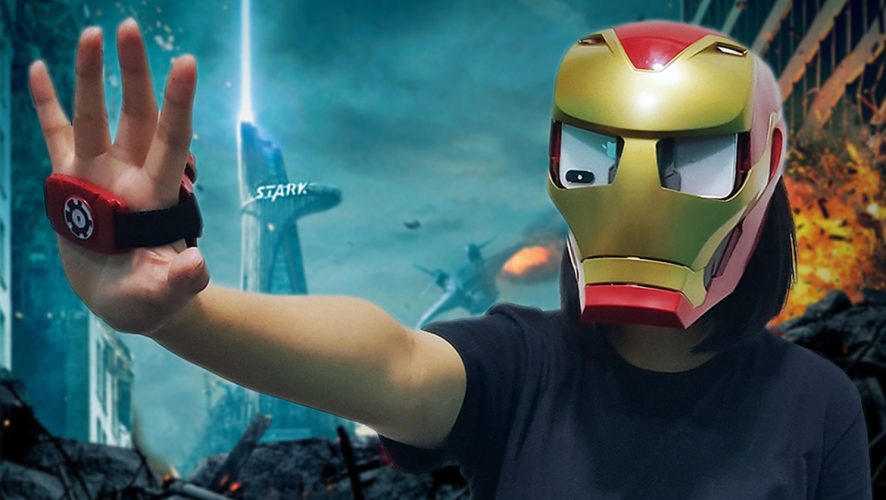 In recent times, it might be every kid’s (and some adults) dream to suit up like Iron Man and fly around blasting enemies. Hasbro has now (sort of) made that dream come true with one of their latest toys, the Avengers: Infinity War Hero Vision Iron Man AR Experience.

By blending augmented reality with a physical Iron Man helmet, it lets kids and adults become a superhero in their own home and transform any room into an intense battle against Thanos and his minions.

While you may not be a kid, us geeks are definitely still kids at heart, so it won’t be unusual for us to take this toy for a spin! 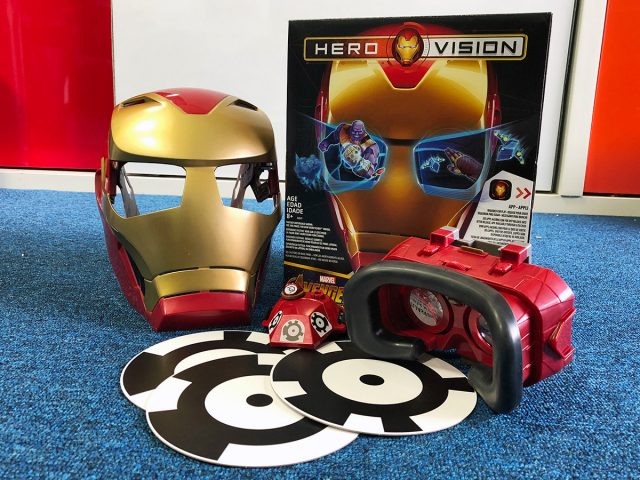 The whole package comes with an Iron Man helmet, AR goggles, 3 AR markers, a gauntlet, and a red infinity stone (the Reality gem). Minimal assembly is required to attach the head piece to the Iron Man mask.

Next up, install the free Hero Vision app from the iOS or Google Play store. The app is only supported on certain operating systems and devices due to the mask’s size constraints, so do check for compatibility before purchasing, as the app is required for play. We played using an iPhone X for this review. 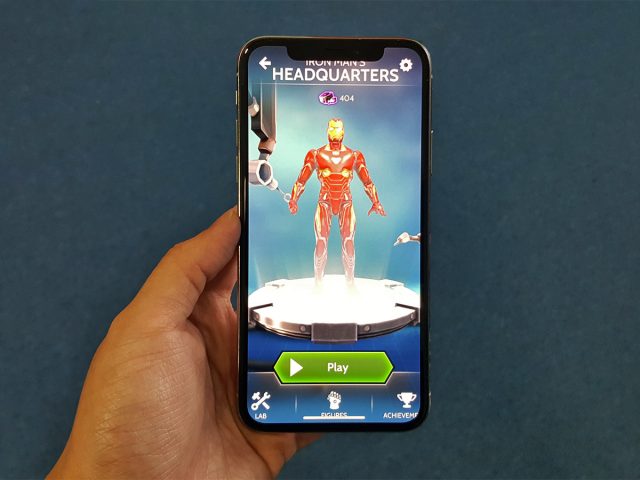 Launching the app, it guides you through the setup process which includes laying out the 3 AR markers. The app recognises these symbols and translates them into the position of bases you must defend in the game. This lets you use your surroundings however you like to change up your levels by placing the markers in various locations.

The gauntlet can be worn on either hand, and then you’re instructed to attach the infinity stone and hold up the phone camera to allow the app to scan the stone.

We’re almost there! Slide your phone into the AR goggles, adjust the focus, then attach the goggles to the Iron Man mask and you’re ready to go. All my fellow bespectacled geeks will be glad to hear that since these are AR and not VR goggles, you can wear it with your glasses comfortably off.

After that lengthy setup process, we’re finally ready to play the game. The story mode has 10 levels, and Thanos appears out of a portal at the start of level 1 to threaten world destruction. It’s time to become Iron Man and save the world!

Thanos sends his loyal minions Proxima Midnight, Cull Obsidian, and Corvus Glaive to attack in various levels, but no, this doesn’t mean that every level has a boss battle. This means that throngs of many Corvus Glaives jet towards the bases standing atop small flying platforms, which does look rather silly. 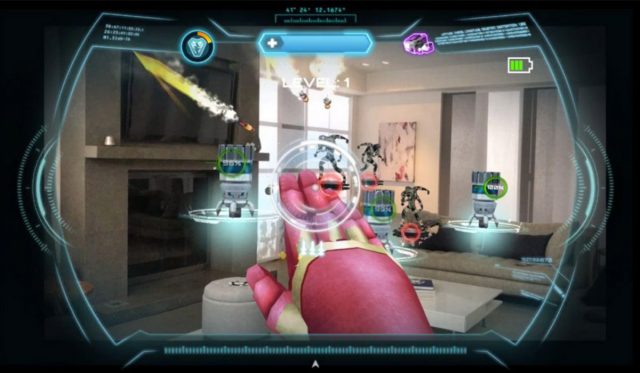 Those AR markers you laid out earlier are now bases which you must defend, as Thanos’ army flies towards them from all directions to attack. Taking down enemies is simple, just line them up within the middle circle, and wave the gauntlet in front of the camera to fire homing missiles at them.

The action of firing the missiles can be done however you wish, by brandishing you hand outwards with as much heroic gusto as you can muster, or alternatively by giving the enemies a friendly wave. Heya Corvus! How’s it going? Oh… nevermind.

Up until the final level, that will be the bulk of your gameplay, which can get pretty repetitive. The enemies fire at you, but very occasionally, and in response you have to activate your shield by turning your palm to face the camera. These shields only last for a few seconds, so you have to time it accordingly for the incoming fire, but other than that there aren’t any direct threats to you. 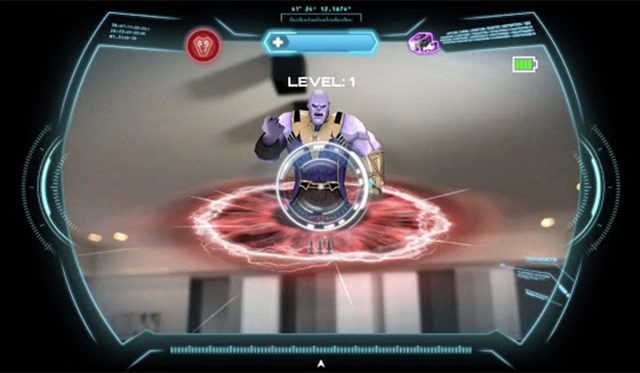 Since the game doesn’t give you much variety in gameplay, it’s up to you to make things interesting! You could stand still or even sit back and fire at targets but as long as you’re careful not to bump into furniture, you can move around freely and pretend you’re in a fierce battle, which kids will love.

And parents will be happy to know that the game requires players to take regular breaks. After every 2 levels, the game instructs you to remove the helmet to spend a minute upgrading your equipment and giving your eyes the much needed rest.

Things really start to heat up only at the last level, where you finally enter a showdown with Thanos! Instead of bases, the AR markers turn into portals which you must destroy, and out of them fly Thanos’ minions who are firing at you from all directions. 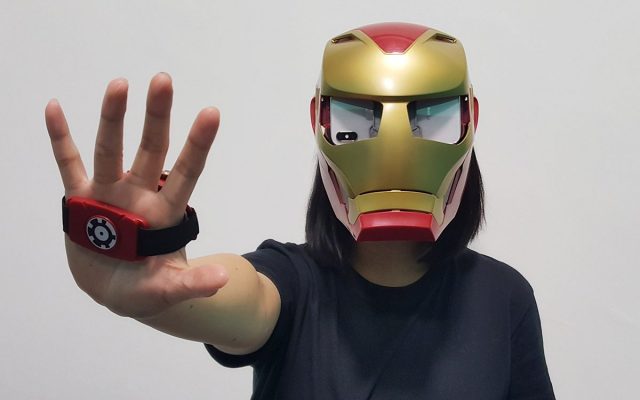 Should you emerge victorious against Thanos in level 10, the warlord is not vanquished, but disappears into another deep space portal. This unlocks the medium difficulty for the same story mode, as well as an endless mode if you want some non-stop action.

Playing the game for an extended period gets tiring though, and not just on your eyes, but on your cheeks as well. Mobile phones aren’t light, and the weight of a phone, mask and goggles all rest on your cheekbones.

Unless you’ve got some solid Robert Downey Jr. cheekbones, the weight causes your cheeks to sag down uncomfortably and pulls down slightly on your lower eyelids. I would imagine this weight to be even heftier on a kid’s smaller face, so this is quite a concern for the toy’s design

Along with your eyes and face, your phone also needs a good rest from the game. Every time the app instructs you to remove the helmet and take a break, we realised that the phone had also gotten astonishingly hot, too hot to even hold. 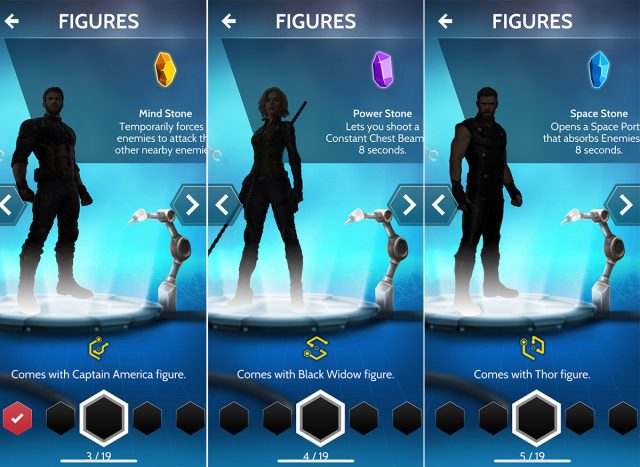 Remember the Infinity Stone we attached to the gauntlet earlier? There are 6 to collect in total just like for the Infinity Gauntlet, although affixing them to Iron Man’s armour seems a little off canon. The stones provide additional abilities or power-ups, for instance the Reality gem that came with the set repairs the most damaged Defense Base.

The catch? To collect them all, you have to buy products from Hasbro’s range of Avengers: Infinity War action figures, as each comes with one Infinity Stone such as Thor who’ll get you the Space Stone. Each figure retails at US$9.99, so obtaining all the remaining 5 stones will cost you another US$49.99. Clever move, Hasbro. 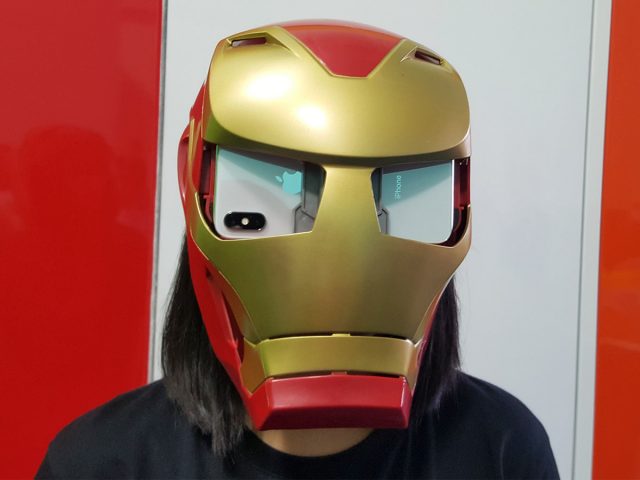 With the straightforward gameplay, the toy would probably be better appreciated by kids than adults, as I found things getting pretty samey after a while. But the AR aspect allows for a fun way for parents to interact with their kids even as they’re plugged into a game, as the camera lets them play along in the background.

The Iron Man mask could also be used for role-playing purposes, although wearing it without the AR goggles attached leaves a hollow cavern behind the mask, which doesn’t look as good as a regular Iron Man toy mask.

Best to leave the mask on display if you’re not playing, as the head piece allows it to stand nicely upright and the mask’s large 1:1 scale size makes for quite a good-looking display piece indeed. 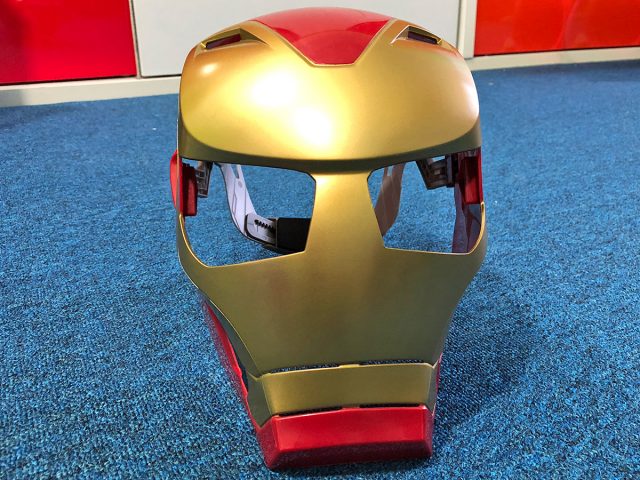 The Iron Man Hero Vision is priced at US$49.99, but retails in Singapore at a higher price of S$99.99. Completing the 10 levels of the initial story mode provides an hour or so of gameplay, and the game promises even more fun with harder difficulties and the endless mode, although the thought of repeatedly firing at the same enemies might not appeal to some.

Even so, the toy is well-thought-out and combines the joys of traditional role-playing and AR, which will satisfy any fan of Iron Man, regardless of age.

Those looking for highly engaging Iron Man AR gameplay might want to think twice before opening their wallets, but this toy would make a fantastic gift for kids and a worthy addition to collection of any avid Iron Man fan. 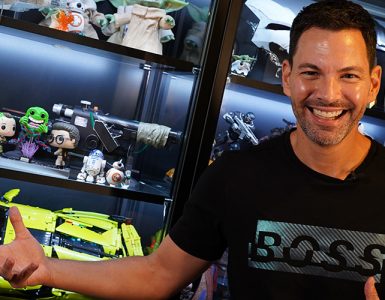