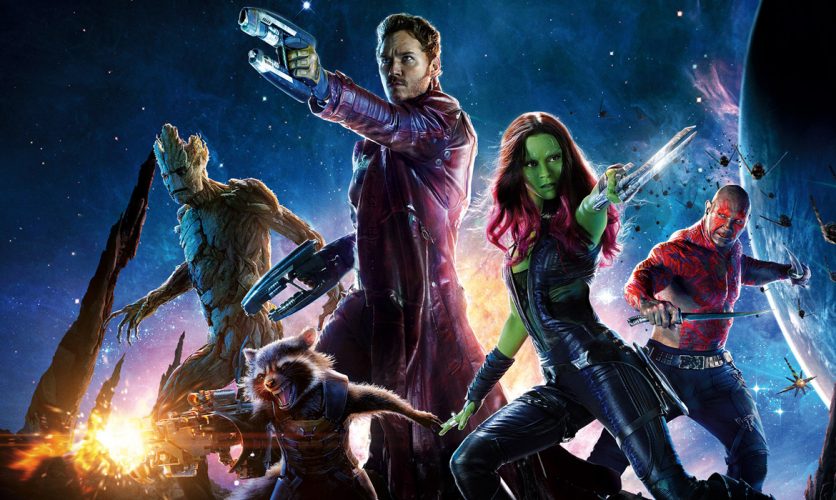 Geek Review: Guardians of the Galaxy

As you sit there pleasuring yourself into a sock, or cleaning baby poop off your ring finger, or trawling Facebook for something inspirational denouncing thigh gaps, you are growing ever uncooler by the minute. Tick tick tick. Every minute more increasingly uncool you become. About now you’re Sham-wow uncool. Soon you’ll be as uncool as that uncle who just discovered Candy Crush’s ticket beg function.

That’s you. A stupid loser turning more losing, with every passing microsecond that you are not in a cinema right now beholding the absolute brilliance that is the Guardians of the Galaxy. 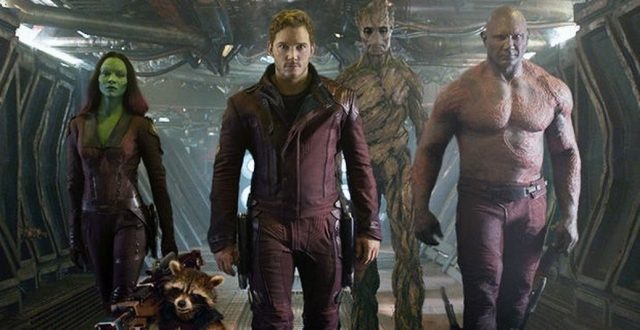 Guardians of the Galaxy packs more heart than any of the other offerings thus far in the Marvel Studios roster. An all-in gamble on the creative vision of indie director James Gunn, Guardians is Marvel rolling the dice, taking a chance, and cleaning up at the geek roulette table with their tenth cinematic offering, launching the next phase of expansion to the Marvel Cinematic Universe where all the stories not Earth-centric have a chance now to reach the big screen.

GotG follows the misadventures of Peter Quill. Abducted from Earth at a tragic time of childhood, Peter now inhabits the other side of the universe as a drifter, a grifter and smuggler who tries to negotiate the sale of a mysterious orb to a shadowy buyer of limitless wealth.

Channeling his inner Han Solo, Chris Pratt’s Peter Quill is almost instantly likable as a charismatic rogue, who is just about able to talk his way out of a kerfuffle as he is likely to shoot his way out of it. A momma’s boy far away from mommy, Chris skirts danger by putting his heart out there. A trusting conman, A friendly robber. That’s Peter Quill.

As situations unfurl that bringing Peter into the middle of escalations between Kree zealot Ronan the Accuser, a fellow smuggler irate at reneged deal called Yondu and the planetary police of the Nova Corps, Peter finds himself in prison. 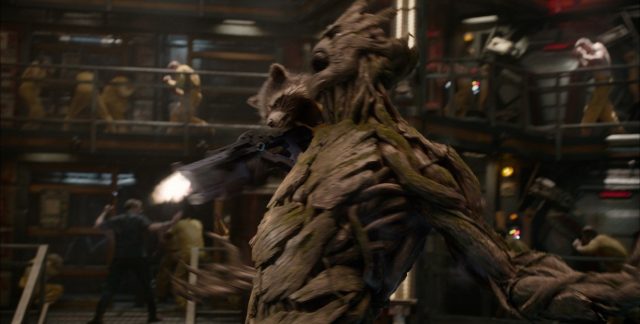 It’s here when a lovable ensemble dynamic grows as Peter meets Gamora. Drax, Rocket and Groot. The members of our soon to be ensemble.

An eclectic mix of individuals all harbouring issues about Peter and motivations of their own to bust out of prison, these unwieldy band of miscreants are forced into an uneasy alliance when a series turning events force them to stay together as a force for the common good of the universe.

Guardians of the Galaxy boasts the most heart in all of the Marvel films to date. If Iron Man trades on Robert Downey’s snarky appeal and Captain America on its all American good old boy message and Thor on it’s Diet Lord of the Rings vibe then Guardians trades on the lovable ensemble personality found in the old school A-team, Goonies or Han-Chewie chew chews, you get the drift.

A rollercoaster, rock and roll adventure where locations, people and situations are thrown at you with an astonishing clip, there is a certain assuredness in the storytelling that is more reminiscent in old school adventure classics of some pedigree. James Gunn executes a supreme confidence of vision, moving the story along and building characters at every step of the way and never forgetting the laughs. Because of its very nature, Guardians is prototypically about as far away from the superhero genre as it can be, none of the people in Guardians are super-powered heroes by any degree in relation to the people around them. Think of Guardians as old school Star Wars by way of Marvel and you get right to the heart is what’s so completely endearing and intoxicating about Guardians of the Galaxy. A potent mix of great songs, great laughs, and great characters that you end up caring so much about.

It would be remiss to go through a plot or story breakdown of this space opera by any degree. If there is anything to note, Guardians is fiercely funny, never afraid to put a well placed belly laugh in the middle of a deathly situation, it zigs when anyone versed in the Marvel template to date expect it to zag. And many a moment delights you with its candour, audacity and surprising depth of character development by film end.

Running at an easy two-hour plus clip, it’s almost heartbreaking to have to wait to see more of this intrepid band of friends that somehow feel like you’ve known them all along.

Forget the Avengers. The Guardians of the Galaxy are here. And they’re not friends. They’re family.

Full marks even if the film might have its flaws. You know why? Your wife does that thing that irritates you. You wouldn’t trade her for anyone else in the world. Your mom just can’t stop telling people about that first time you peed your pants. Still the best mom ever. I’m hooked on a feeling. And you’re still losing cool points being here reading this. Get your ass into GotG!