If you grew up an 80s kid like me, you’ll be familiar with R.L Stine’s best-selling horror series Goosebumps and his myriad of terrifying creations. If you’re not, you can still enjoy this roller coaster of a monster-filled, comedy-laced action movie.

Goosebumps starts out pleasant enough, with teenage hero Zach (Dylan Minnette) moving to the small town in Madison with his mother (Amy Ryan) in hopes of a new life after the recent death of his father. He soon meets his neighbor, Hannah (Odeya Rush) and her mysterious father (Jack Black) who turns out to be R.L Stine himself. After witnessing a heated fight between father and daughter, Zach and his new pal Champs (Ryan Lee) sneaks into the house in an attempt to save the damsel in distress. Things take a nasty turn when they discover a shelf full of manuscripts and unintentionally releases the locked-up monsters from the pages and into the real world. Mayhem follows and it is now up to Zach and friends to stop these monsters before they take over the whole town. 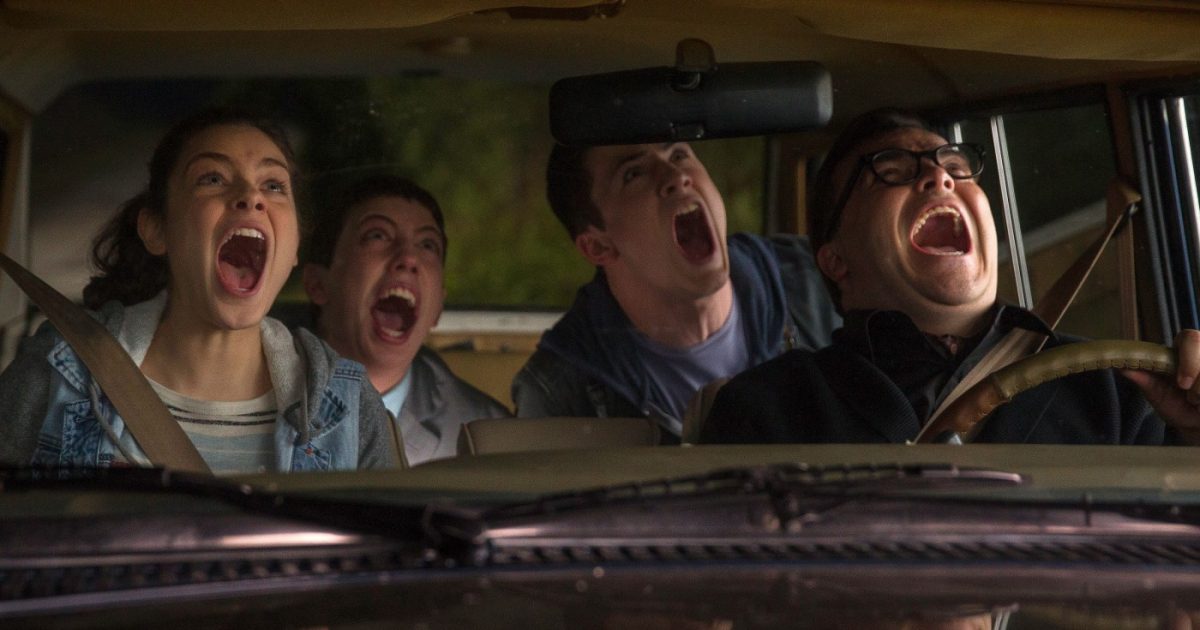 This is where the story-telling ends. What follows is a mad amount of running and chasing and screaming as Zach and his friends try to escape the monsters while trying to figure out a way to end all this horror. Each monster is given ample screen time, from the brawl in the kitchen with the garden ghomes to the hide-and-seek among the supermarket shelves with the Werewolf. Then, of course there is Slappy, the extremely creepy ventriloquist dummy who crafted the chaos in an attempt to seek revenge on his creator who had locked him in the books for years.

The realistic CG monsters in the movie created by Oscar-winning VFX house, The Moving Picture Company are definitely worth a mention. In total, 17 monsters were constructed, among them are the abominable snowman, the giant praying mantis, the werewolf, an army of evil garden gnomes and a vampire poodle – which appeared only for a mere five minutes, scared me the most. Talk about having your nightmare come to live.

If you haven’t read any of the Goosebumps books, these monsters might intrigue you enough to pick up a copy and spend a cozy Friday night at home relishing in the company of these make believe creatures.

Despite being the biggest star in the movie, Jack Black’s character lacks depth and emotion. Goosebumps did not give him enough screen time to grow and develop. As the reclusive and mysterious R.L Stine, I was expecting a lot more so I wasn’t terribly impressed. On the other hand, Dylan Minnette, I’m sure, will be stealing the hearts of many young girls.

Goosebumps is a fun package of special effects, ghouls and monsters, adventure, scares and comedy. I walked into the theatre not expecting much but I walked out feeling strangely nostalgic and fully entertained.

Nostalgia is a tricky thing to invoke but Goosebumps has been able to successfully pull it off. If anything, the movie is a great way to reel in old fans and introduce new ones to the novels.