The sun has just come up. It’s hot. The jungle is coming alive. Slowly moving through the dense foliage, I spot my target. A small village that houses a man that I need to interrogate. I pop up a drone to see what the protection looks like. Several armed guards and a couple of snipers. I look to my left to see my co-op teammate slowly moving into position to take down the sniper. My other teammate is moving around to the back of the village. He suddenly spots a guard below the sniper tower. We need to do this quietly. On a count of three we need take out the sniper and the guard below at the same time. Then all hell breaks loose..

Before we could even get off a shot, one of my teammates is spotted by a guard we missed. We quickly scramble for cover. More enemies are streaming into the village, we need to act fast. Suddenly the back end of the village is being bombarded. A mortar strike called in by one of us. This helps a little by killing a few enemies and distracting the rest, but the man we were here for is now on the run. We see him dash towards the only vehicle in the village. There is only one road out of here. We can cut him off. We turn and run down the side of mountain to the road below. This guy is gunning it. We are not going to make it. My teammate is now shouting “take out the tyres!”. At this point we all open fire on the car. We should have just let one person do it. The car didn’t last long and blew up into a fiery mess with so much weapons fire being aimed in its direction. One dead informant. No intel for us. This is just one of many examples of how missions could go in GR:W. There was no mission fail screen for this particular failure and the village will be repopulated with an informant over time. So we can try again and possible screw it up again. Joy! 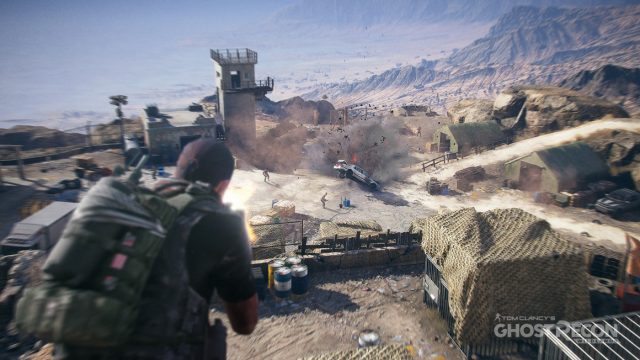 GR:W is massive. The biggest open world Ubisoft has created to date. But before we start romping through the jungles and towns of Bolivia, we need to create our character.  This is your usual creation suite. Male or Female. Clothing. Boots. Backpacks etc. Not as robust as I hoped for but still better than The Division one. Once it’s over you’ll be dropped into a cut scene explaining what you need to do. After that, it’s mission time. The story progression system in this game is actually pretty great. You don’t have to stay in the starting area if you don’t want to. You can go to any area you want. However, the different areas do have difficulty ratings (skulls – the highest being 5), so it would be suicide to immediately head to a high level area. You can pick from any number of missions that are available to you and in any order. 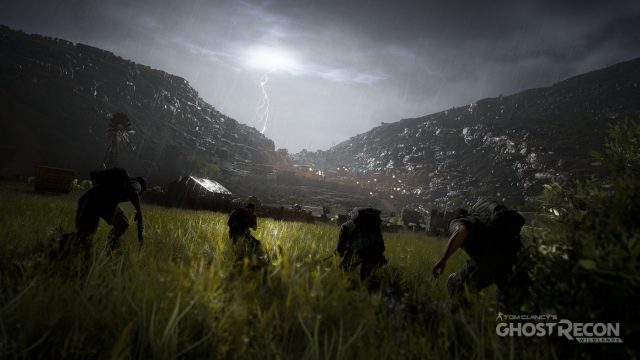 There are story missions, supply raids, rebel ops, interrogations, capture missions and a whole bunch of collectables. While you can approach each mission differently, they are in essence the same thing over and over. The only missions that break out of the mould are the boss assassination missions. These only appear once you have completed enough missions and gathered enough intel to reveal where they are.

The skill system is not so good though. You can find skill points littered around the map and you also gain them from doing missions. These can then be used to upgrade your character. The thing is though, many of the skills that you need to unlock should have been available from the beginning. A spec-ops character that needs to unlock a parachuting skill or even to zoom in with binoculars? How about if you want to sprint? Skill points please! Essential items like C4, mines and upgraded drones all take lots of skill points and resources to unlock. It’s all a bit silly and not well thought out.

As with any Tom Clancy game, character movement and gunplay is really good and satisfying. Hit detection is spot on and enemies go down in a few bullets or a single headshot no matter what their difficulty rating is. No The Division bullet sponges here. 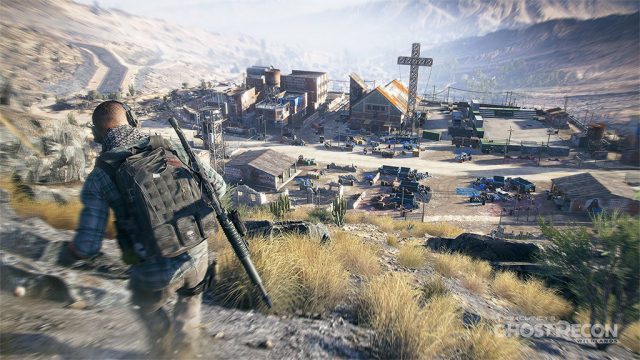 Without a doubt, this game is designed for the co-op experience. I’ve being playing in a 3 person squad and its been a whole load of fun. Having tactical discussions on what the team is going to do when we reach the mission objective is a must and fun, especially when everything goes to hell within seconds of starting the plan. This is definitely one of the best co-op games out there. If you are playing on your own, then your squad will be 3 AI that aren’t very good. They get stuck in cover, don’t take cover, won’t shoot when needed and die very easily. Play co-op. If your friends don’t have the game, there is a pretty robust matchmaking system to use.

The world in GR:W is extensive, but it feels dead and empty at times. Villages don’t feel lived-in; people aren’t chatty. It’s very dreary. But, this isn’t the type of game, or series, that draws on that crowd. It’s a tactical shooter that allows you to be careless and just have fun. By all means listen to the story; just don’t get mad when it leaves you wanting. If you don’t go in expecting to be blown away by a thoughtful narrative, you’ll have a great time playing.

The world in GR:W as mentioned before is massive, but as game worlds get bigger you need to make them feel alive and alas most of the time GR:W  feels dead and empty. Villages don’t feel lived-in; civilians don’t talk and the whole thing comes across as…glum. What is not glum though is weapon variation and customisation. Hey! It’s a Tom Clancy game! What did you expect? There’s a great selection of weaponry and attachments (I’ve never seen so many underbarrel options before!) and almost all of them must be found throughout the world. 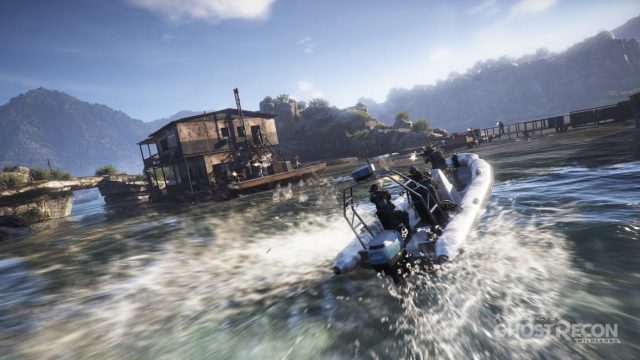 There are many vehicles in GR:W too. Cars, trucks, bikes, planes and helicopters to name a few. Driving is….interesting. Cars and trucks feel like you are constantly driving on ice and a sudden turn will send you spinning wildly off course. Helicopters fly like they stuck in some form of sticky substance and planes feel so light you wonder how its in the air. Lucky there is a fast travel option which saves a lot of frustration.

GR:W is arguably one of the best co-op games in some time. If you have some friends who like this kind of stuff, this is a must play. The skill system and driving mechanics hold it back but don’t let this put you off.

You must experience this in co-op with your friends. If not, you give the game a disservice. Driving is woeful and the open world is bland, but there is a whole lot of fun to be had with your squadmates.