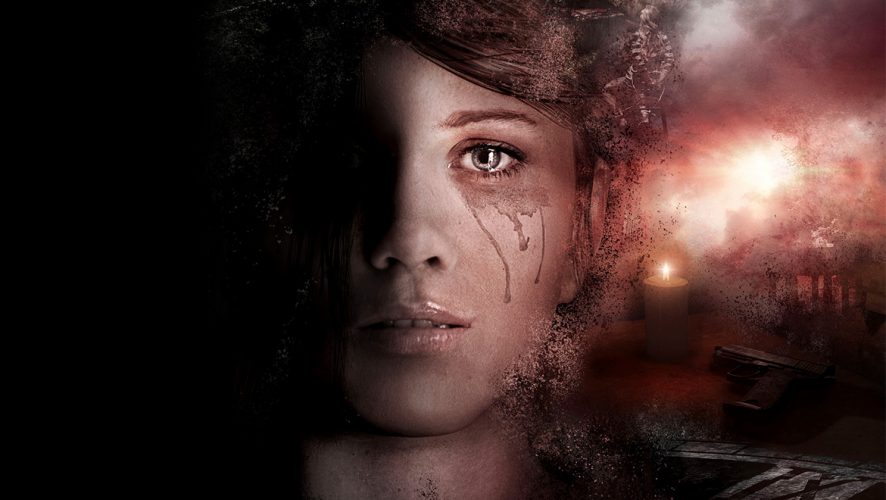 Geek Review: Get Even

Get Even starts with an interesting setup. You play as a person called Cole who wakes up in a strangely deserted building and is then given the simple task of ‘find the girl’. No more information is given to at this point. So with nothing much to work on, you head out the door…and then the strange noise begins..

At its heart, Get Even is a mash-up of three separate genres with each one being pulled off with varying degrees of success. First up and the biggest part of the game, is the survival horror component. You begin the adventure in a strange complex which is eerily deserted bar a few soldiers dotted around the area and some drones flying around. As you search through the buildings collecting clues you will begin to unravel the story. As you progress, the game changes with what decisions you have made throughout the game. These could be things like what characters you did or didn’t help and what puzzles you may have solved or left alone.

The changes to the game includes rooms that repeat and lead to your character having memory hallucinations or even a maze of tunnels that seems to change when you turn around. The survival horror genre wouldn’t be what it is without some jump scares and Get Even has some great ones that actually made me jump out of my chair. Nearly. The scares mixed with a phenomenal sound design can leave you a little shaken up and this part of Get Even is easily the best and you wish the whole game was like this. 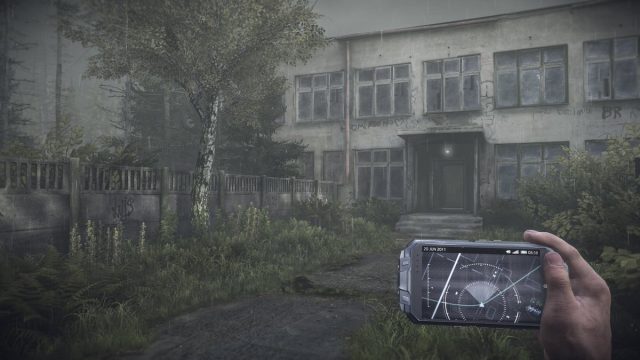 The second genre on show in this game is the mystery/puzzle element, where you must uncover various clues in order for the story to move from point to point. This part is easily the least interesting section of the game but it is where all the story elements are presented to the player. As you progress through the game you’ll find various puzzles lying in your path that range from working out how to switch the power back on and unlocking doors via a series of rooms that need some black light investigation.

The puzzles themselves are not too easy and not too hard hard which is great as they are just right for this type of game and there is nothing as outlandish as a Silent Hill puzzle here. Many of the puzzles require you to use your phone to solve them. Your phone is equipped with a black light, a map, a heat camera and a scanner. The scanner is pretty cool as it allows you to scan for clues in the environment. As you wander around, green lights will appear on the phone indicating that there is a clue nearby that can be scanned. The phone will then focus on the clue which will then allows you to scan it which in turn allows you to read it, break it down or put it together. 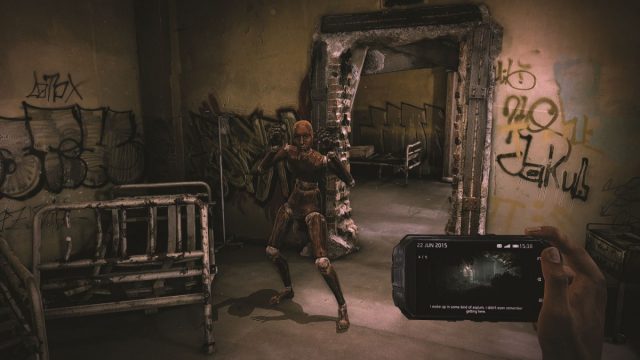 The last genre in the game and the most frustrating, is the first-person shooter portion. It’s not very good and just feels tacked on. It just feels oddly out of place due to what has come before it in the game. Of course it’s not meant to be a Call of Duty or Battlefield but it doesn’t even accomplish the basics very well. Shooting feels surprisingly light and laggy and when combat does breakout the enemy AI also has severe issues. However, a cool feature is the corner gun that bends around corners to allow the shooting of unsuspecting enemies.

The presentation of Get Even is pretty good for a current generation title, especially when the game is not a AAA monster. The lighting, textures and shading are absolutely superb and there are some great visuals that intensify the horror included in the story. This is especially apparent when you hit the sewers and insane asylum parts of the game. The game just looks uncomfortable which is great as it adds an extra level of atmosphere to the overall theme of the game. You won’t find an absolute gorgeous game here, but it doesn’t need to be. The audio is also excellent, with some great music that is creepy and unnerving in equal measure. The dialogue is also pretty great for a lower budget game which is backed up by some really good voice acting. 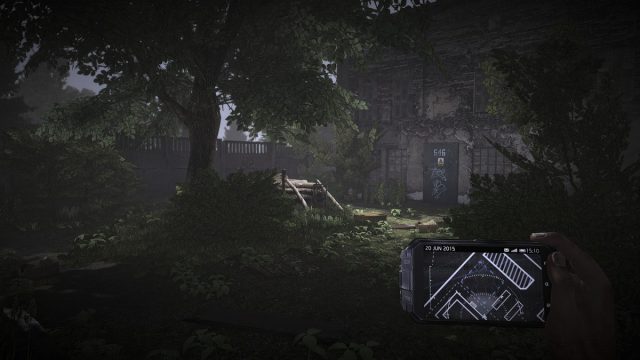 Overall, the game does a fantastic job of conveying a thick mood of dread. You are never sure what or will happen next as you inch your way through the levels while unlocking the mystery of the game.

Is the payoff at the end of the game worth a 10 to 12 hour journey? I think it does. The game takes some brave design choices to deliver an interesting take on a survival horror title. Do some of them not work? Yes of course. But they don’t break the game. The worst offender being the FPS parts, which are tolerable but not game breaking. The game is a breath of fresh air in the age of the AAA game. Well worth your time.

If you are looking for a game that is a little different but combines survival horror, puzzles and FPS elements, this is the game for you. A great little title that is better than some AAA titles out there. Recommended.