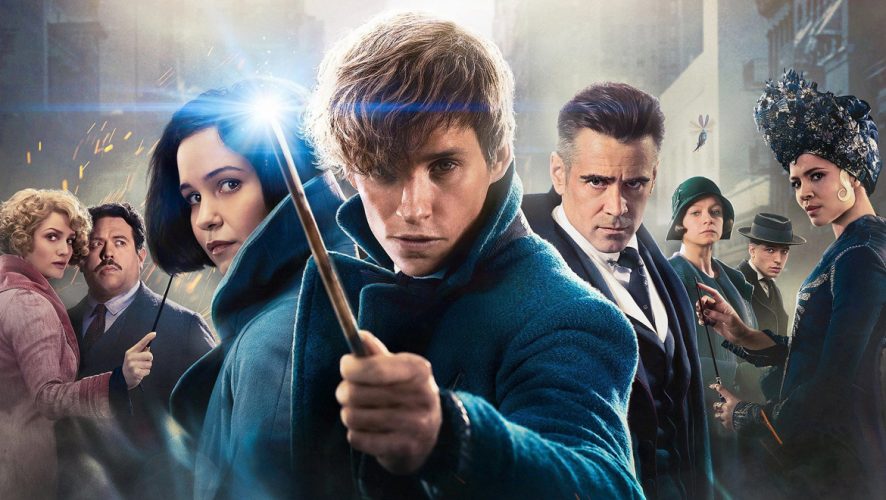 Geek Review: Fantastic Beasts and Where to Find Them

In many circles of Geekdom, the magical realm of Harry Potter can be, to a certain extent, comparable to the Star Wars Universe.

There is the one person personified as being the creator of the ideas in the realm, and fans get ridiculously upset if anyone even attempts to criticize any character/plot point or narrative within that world. And that world keeps getting bigger, with new films being made.

After walking out of the cinema and seeing a number of folks dressed in Hogwarts colours, it would appear that the hype for Fantastic Beasts and Where to Find Them, regarded as a story within a story and prequel to the Harry Potter series, is running high.

With a real-world five year gap following the last film, Harry Potter and the Deathly Hallows, the fantastic Newton “Newt” Scamander (Eddie Redmayne) looks to be a worthy protagonist to take over Harry’s magical wand.

One thing is for certain, I’m amazed at how J. K. Rowling has been able to go from book to script. Though she remains the chief architect of the Potterverse she created, the screenplays for the earlier moves that the books were based on were not conjured by hers truly.  But this one is, and given that the original text was a Potterverse Monstrous Manual, it is rather remarkable as to how Rowling has been able to build an entire backstory for it, and actually make it work.

Scamander is nothing like the Potter we love, yet he retains much of the likability. In a nutshell, we’re treated with enough character and narrative elements, so that the world still looks familiar to us, while being different enough to stand on its own magical feet.

We all know about the young boy hidden under the staircase who goes on to defeat a powerful wizard and from the looks of it, Fantastic Beasts and Where to Find Them is where the ball started rolling from. Overshadowing the entire plot of the movie would be the looming threat of Grindelwald, whose actions would be the basis on why Voldemort, Dumbledore and Potter have a movie in the first place.

To most, Grindelwald might be a familiar name yet most audiences would not know who he is. The important takeaway would be that he’s one of the big bads in the Potterverse, who at one time possessed the Elder Wand, and sought to unite the Deathly Hallows. Do these ring any bells now?

Here, Newt is a Magizoologist who arrives in New York circa 1926, only to have a No-Maj open his magically-expanding suitcase, releasing his collection of magical creatures. The appearance of these creatures threatens the secrecy of the Wizarding world, as well as the tense relationships between the magical and non-magical sects in America.

If you’re worried for not having enough knowledge of the universe as a whole, don’t worry, that’s what Wikis are for. You’ll definitely have questions at the end of the movie, but that actually makes it all the more enjoyable to discover the world past the movie.

The benefit of Fantastic Beasts and Where to Find Them would be the absence of an source material to compare it to. Right now, we’re seeing the purest form for Rowling’s writing for the big screen. The movie has many moving parts going on and the beasts that Scamander has to find are but the least of his problems.

Coming from the perspective of an avid comic book reader, you’d find that this movie has more in common with X-Men than anything else. The struggle between what is right and what is ideal for the world would come into question here.

As with most Harry Potter movies, the sheer amount of characters that the film throws at you can be immense. Instead of the trio we are familiar with, we now have four characters in the form of Tina Goldstein (Katherine Waterston), Jacob Kowalski (Dan Fogler) and Queenie (Alison Sudol), running alongside Scamander. Whenever any of these characters take the stage, the scenes instantly lights up. Each of the actors have a knack for delivering their lines that outshines their other costars. Even Percival Graves (Colin Farrell) cannot hold a candle to his less identifiable cast members.

Casting magic might have occurred here with the casting of the leads. This film marks the first encounter between Goldstein and Scamander, and it is no spoiler that eventually, the pair would couple up and we’re able to see the growing attraction between the two before any actual sparks fly. The whole movie takes place over two days though, so we still have plenty of time to see how these two work out the relationship.

Looking back, each of the main characters seem to share the same amount of screentime, which is rare for a movie that has so many characters. There is sufficient length for us to explore each of the characters and learn about their backstories in a concise manner. The writing is tight enough so that we get the right amount of information without slowing the pace down. The challenge, however, would be seeing how everyone fits into the future narrative of the series.

As with the title, the beasts steal a good part of the spotlight from the human characters and the movie certainly wouldn’t be the same without them. If there’s one thing that comes to mind as we work through the entire textbook of beasts, it would be how much marketing potential each of these creatures might have. Look out for the chorus of “Awws” that would ring out the cinema when Niffler makes an appearance.

While Fantastic Beasts and Where to Find Them still retains much of the essence of the Potterverse that we’ve grown to love, it comes as a bit of a surprise how little has changed over the years, before we reach Harry’s era. But why change a good thing? I guess there are just some things that makes it hard to deviate from and, thankfully, it is repeated to positive effect.

Not many franchises are able to take a parallel track from the main material and succeed. Fantastic Beasts and Where to Find Them is a masterclass in how to do so.