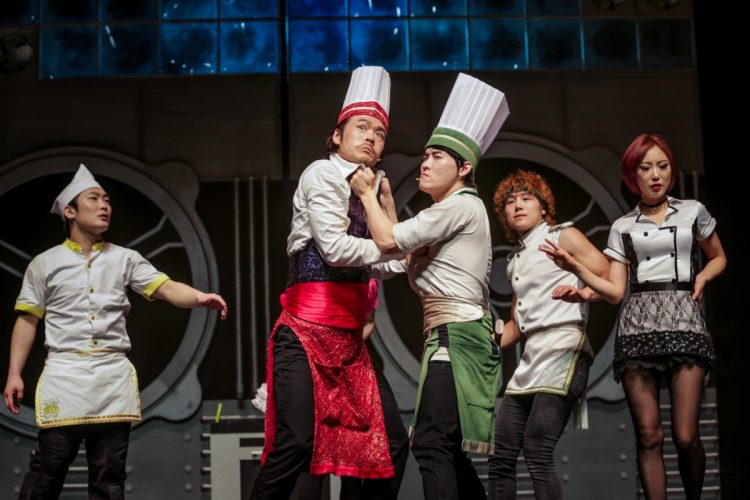 CHEF Bibimbap Vs Chilli Crab is a riot of a show, with singing and beat-boxing interwoven into a storyline that pits two competing chefs against each other, throwing in some culinary action that involves martial arts and b-boying.

It’s easy to mistake the latest stage production for another Korean show- Nanta. Both are non-verbal and feature nifty action in the kitchen. Unlike Nanta, CHEF does not use real food (except at the end of the show) and if you’ve seen Nanta, you’d find CHEF to feature far more action and comedy. 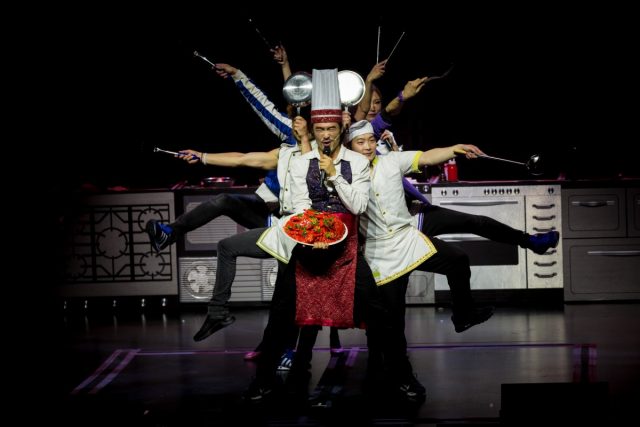 The master chefs each dish up popular dishes in a series of tongue-in-cheek situations (which includes quite a fair amount of audience participation) until the final showdown, pitting them against each other with the iconic dishes of the popular Korean Bibimbap and local delicacy Chilli Crab. 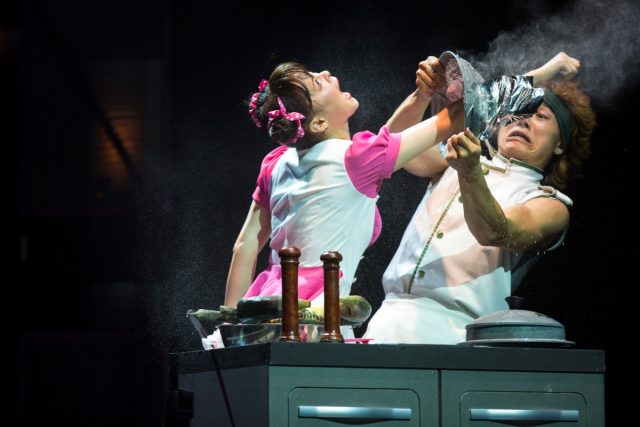 The show’s kitchen backdrop serves as the perfect canvas for the cast to showcase their talents. The beat-boxing duo of Park and Wii impress the most with their non-stop vocal percussion, in perfect sync with the cast’s movements. Their beatboxing sound effects delighted the young audience the most.

With every audible fart, loud burp or a low growl, the kids in the crowd break into endless mirth. The rest of the cast hold their own as well, with the Red and Green Chefs carrying their comedic timing to perfection. They sing, they dance and break into acrobatic acts; the Green Chef even speaks a smattering of Mandarin and popular local dialect Hokkien (with his “hello, chiobu”) that resonates with the audience and thoroughly entertaining them. 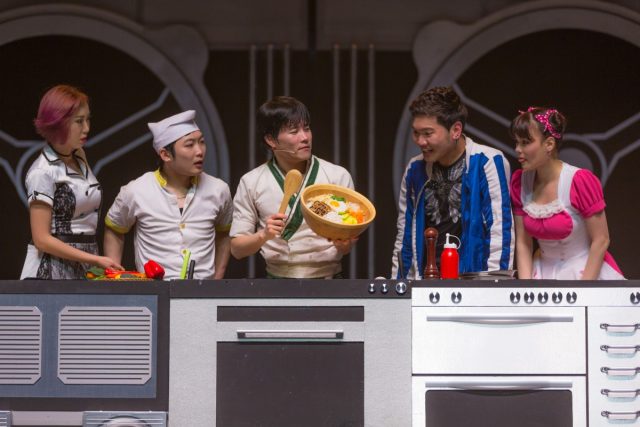 The show’s finale is the clear highlight, with the cast returning to the stage in a final number where they, stripped of their kitchen garb, demonstrate their superb dance moves. Our beatboxing favourites return as well to properly showcase their talents, beatboxing to the likes of Michael Jackson, Psy, and C&C Music Factory.

Suffice to say, there really isn’t a dull moment in CHEF Bibimbap Vs Chilli Crab. The production was tight and the pace steady, and the cast enjoy clear chemistry. If the show can hold the attention of my three year old from start to finish, it’s a clear winner in my books.

For more information on showtimes and bookings for CHEF Bibimbap Vs Chilli Crab, please click here.