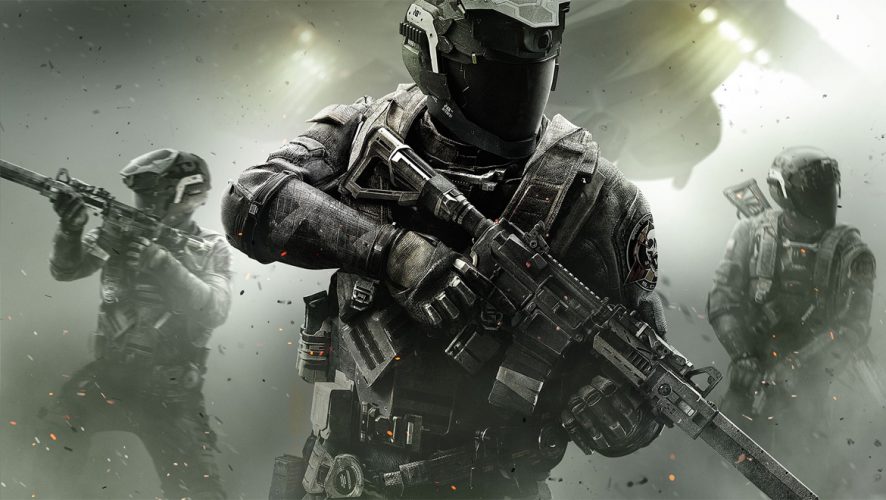 We used to joke that space is the final frontier. Well, not anymore, thanks to the guys from Infinity Ward and Activision.

Call of Duty : Infinite Warfare takes place in our solar system, with players taking on the role of Captain Nick Reyes. This badass protagonist protects innocent civilians from the Settlement Defense Front (SDF), a militant group poised to take over the system led by one Salen Kotch. You might recognise Kotch’s voice actor if you’ve been watching Game of Thrones, for he is voiced by Kit Harrington, better known as the ill-fated Jon Snow.

As with all Call of Duty campaigns, things go horribly wrong real quick and it’s up to you and your crew aboard the aptly named battleship Retribution to make things right. Most notable among the crew is Ethan, an all-action robot that just so happens to be equipped with the best dialogue in the game.

Kotch, on the other hand, does his best to be menacing as he goads at your feeble attempts to sabotage his sinister plans. Sadly, he does not appear often enough to carry out most of his threats, usually televised through various channels of in-game media. No offense, but it is just not really scary to have him show up on your visor or monitor and hurl insults at you as you are rampaging through his forces.

The game does, however, perform a decent job of ensuring that the crew onboard the Retribution have their own motivations and personalities, and it is very easy to start loving or hating them.

Is it still tourism if you wreck stuff everywhere you go?

Being set in space gives the game a whole variety of locations for violence to ensue, and the game does not disappoint. Aside from the usual urban combat as you duck and dive between push carts and stairwells, you also get to shoot stuff up as you float aimlessly in the zero gravity of space. Well placed debris and rocks allow you to use your grappling hook to take cover and dodge enemy fire. You get to run along the hull of the ship, take down enemies and watch them drift into the vastness of the nothingness that is space.

Once inside the ship, it’s a whole new ball game. Narrow claustrophobic corridors surround you and make you reminisce of a certain ship named Nostromo, albeit not having shadows lunging at you from deep in the dark.

Another set of missions that were memorable are the ones where you get to pilot a fighter jet in space. Named Jackals, these fighters allow you to engage in aerial combat with 30mm and 60mm mounted cannons as well as missiles. The dogfighting is a welcome addition to the game, and for someone who never learnt how to appreciate air simulation games, it was an absolute blast. The Jackal missions always play up the sheer chaos of aerial combat, floating debris, tall obelisks and other ships. Even asteroids create an interesting arena where you have to weave in and out through the bedlam to fulfill your objectives.

Other than the usual grunt enemies, we also have robots who are not only harder to kill, they also self detonate if you get careless and do not finish them off properly. Larger mechs also appear in the game from time to time. Armed with heavy machine guns and missile launchers, they require a change in strategy to take down effectively. While headshots mostly still get the job done, shooting limbs of robots is oddly gratifying as well. Although, doing so means you might be crept on and dragged down by a beeping self destructing robot torso as he clings on to you stubbornly.

One does not simply talk about a Call of Duty game without talking about the weapons. Many missions in the game allow you to select your loadout. It’s a nice touch that lets you try a greater variety of weapons or continue to use your preferred method of remorseless destruction.

As we have adversaries of different matter compositions this time round, we also need the right tool to pick the right lock. Energy weapons are better against robots which usually require a truck load of lead to take out. Heavier ballistic and laser weapons make short work of mechs as well. Other cool gizmos include anti-gravity grenades, where the detonation tosses the enemy helplessly into the air as you leisurely take them out. Seeker drones quickly crawl towards their hapless victim, hugs its face and violently explodes. Speaking of untimely detonations, you are also able to hack into robots, take control of their actions, catwalk them among their kind and self destruct. There are just so many satisfying ways to destroy enemies in one of my favourite Call of Duty arsenals to date.

I really enjoyed the single player campaign, although the game may feel a little draggy in between because of the side missions. These side missions take you into other locales while allowing you a chance to use bigger and meaner weapons outside the confines of the main storyline missions. They also contribute small bonuses to your weapon arsenal and Jackal in the form of upgrades. Despite these detours that players might choose to take, the game is still all about the gratuitous carnage that it dishes out regularly.

Call of Duty games have never been complete without multiplayer since the blockbuster hit that is Modern Warfare. Infinite Warfare carries on the tradition, but only just. If you enjoyed previous incarnations of multiplayer, you will find yourself very much comfortable with your surroundings. All your favourite game modes are available and still as familiar as you last played them. Rigs replace the traditional classes, allowing you different play styles, while performing your role on the battlefield.

The maps are mostly familiar locales that can be derived from the single player campaign. I was a little disappointed not to find a space map to carry on our zero-gravity shenanigans. Wall running again promises to spice things up a little, allowing you to take on your opponents from different angles. There really isn’t much here that you have not played or experienced before.

Zombies in Infinite Warfare is yet another love letter to undead aficionados. A cooperative multiplayer variant where players are stuck in “Spaceland” try to survive a Zombie onslaught. Spaceland in all its splendor, is all you would want and need from an 80’s futuristic theme park. 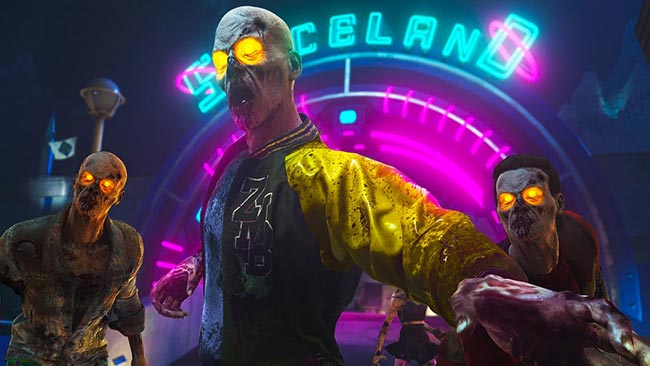 For a mode that does not take itself seriously, it has a ton of strategic depth and decision making. As you survive waves of zombies, you earn money to purchase ammunition and weapons, or open up new sections and unlock better technology. Fate and fortune cards are one-use cards that provide a temporary boost, like unlimited ammo or grenades for example. Much of the fun is in exploring the theme park as you try out different permutations of survival strategies. What worked last wave might not work again, and you will be kept on your toes as the game throws a variety of zombies at you, including exploding clowns (as if clowns not scary enough).

The most interesting twist about Zombies in Spaceland is the respawn mechanic. If your friends are not able to revive you in time, you will be thrown into various Old-school arcade games where the only way you get to respawn is by beating it.

Call of Duty: Infinite Warfare is a welcome addition to the long established franchise. It has a good variety of content and the game really shines in the bits where it takes new risks. The impending zombie DLCs only promise to add even more hours of merciless zombie slaying fun.

Reuben is a designer by day and gamer by night. He loves playing games with his friends more than anything else. By himself, he indulges in turn based roleplaying games, Magic: the Gathering and his guilty pleasure, Koei’s iterations of their Warrior’s series.