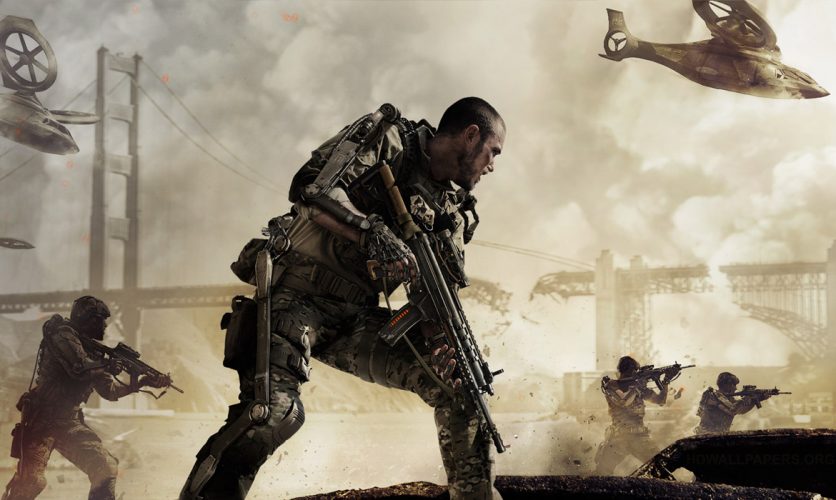 “People don’t want freedom. They want boundaries, rules. Protection. From invaders and from themselves”

It’s dusk. The drop in was a bust. Gunfire rages around me. I’m hunkered down in the back end of a bar somewhere in South Korea. I can’t get a good read on where the enemy is. Time to test out some new gadgets. With a quick button press, a Threat grenade is thrown. The HUD is awash with red. The enemies are now visible. They are hiding on a balcony on the other side of the bar. The wall is not thin enough to shoot through. A quick run downstairs and an Exo Suit boost up to the balcony sees them dispatched quickly and in a way never seen before in a Call of Duty game. Advanced Warfare is the first of the series to enjoy a three year development period and it is also the first full game from new studio Sledgehammer Games, a studio built by the original Dead Space developers. What does that mean? It’s the best Call of Duty in a long time. In fact, it’s the best since Call of Duty 4: Modern Warfare.

As with previous Call of Duty games, the content is split into three areas. Campaign, Multiplayer and Co-op. So let’s tackle it in that order.

In Advanced Warfare you play as Mitchell, a wet behind the ears Marine whose career suddenly comes to an end following a grueling mission in South Korea. In the process of this mission he loses his best friend and probably more importantly to him, his left hand. At the funeral we meet Jonathan Irons (Kevin Spacey) and take part in the greatest button press in the history of gaming. Sarcasm goggles on. Irons offers Mitchell a new hand in return for his services to Atlas, the world’s biggest PMC. This begins a six hour trek around the world that involves lots of shooting and a plot twist you can see coming a mile off.

What makes this one of the best Call of Duty campaigns is the presentation of the campaign and the new mobility of your character. Previous Call of Duty games usually progressed the story via voice over while you stared at a map. Advanced Warfare tells the story with some beautifully rendered cutscenes. In fact they are the best I have ever seen in a game.

The other difference to previous campaigns is the mobility of your character. The new Exo Suit allows your character to boost jump and boost dodge which brings a new dynamic to the game. You can also get a grapple hook upgrade for the suit which can be used as a stealth weapon if needed. These boost capabilities are available in multiplayer, so more on them later. Advanced Warfare tells a coherent story from start to end which makes it the most enjoyable since Call of Duty 4 and Black Ops 2. One thing missing from the campaign that I would have liked to see return was the branching story options that Black Ops 2 introduced. The story as mentioned clocks in around six hours which is better than the terrible four hour Ghosts campaign that was delivered last year. During the campaign you will visit places such as Nigeria and experience a thrilling highway chase while jumping traffic. A quick stop in Greece sees an assassination using a drone. A detour to Antarctica sees battles through the snow. Picture Hoth and you get a pretty good idea. Each mission is fun and it never outstays its welcome. Most people would say you don’t buy a Call of Duty game for the single player anyway. But for the majority that play multiplayer, I say give it a go. You will be pleasantly surprised.

The heart of any Call of Duty release. With Advanced Warfare, Sledgehammer have changed the way you will play online. Be it Deathmatch, Search and Destroy or whatever your online preference is. The Exo Suit is the biggest shake up of Call of Duty’s online gameplay since Call of Duty 4 introduced CoD to the world of kill streaks and character leveling. You now need to be aware of what is above you. Yes, you need to look up now. That sounds like a cruel dig. It’s not. The Exo Suit allows players to boost up in the air, jump to roofs and dodge incoming fire. The Exo also has its own array of Exo abilities such as Exo Ping which reveals player positions. Exo Cloak allows players to cloak for several seconds or until they shoot. There are more, each with a use for a distinct play style. The Exo Laucher allows you to fire various different projectile weapons. Sticky grenades, Smoke grenades, EMP grenades and even a small drone that attaches to an enemy player and tracks him around the map.

The Pick 10 system from Black Ops 2 returns as Pick 13. This system gives you 13 points to equip your character with whatever he likes. For example, the primary weapon is 1 point, adding a scope to it is 1 point. Want to carry two grenades? That takes up 2 points. The system works very well. Attachments for weapons, perks and Exo abilities are unlocked as you level up your character. Scorestreaks are back rather than killstreaks.  You get points for kills, assists and other actions within the game which contribute to your scorestreak. You can have up to four scorestreaks in your loadout. The better they are the more score they need. A UAV costs 400 points where as calling in air support will set you back 900. A new feature for Advanced Warfare is the ability to upgrade you scorestreaks. A Drone costs 450 points. Out of the box you can fly it around the map and detonate it when you get near an enemy. Want machine guns on it instead? Ok that will cost 100 points. Your Drone now costs 550 to call in.

The game ships with 13 maps. These a maps are a bit different to your usual Call of Duty maps. They have been designed for the new Exo abilities. Each map now has a lot of vertical space. Maps have multiple levels which offer up fast ans frantic gameplay. Certain maps have events that can change the map slightly or even contribute to player deaths. On the Defender map, a tidal wave slowly moves in shore and can kill players if they are stuck in the lower level when it hits. After, the lower level of the map remains flooded. On Recovery, a map set on a volcano rim, the volcano warning initiates and opens up a brand new part of the map that the player has to get to. If the player remains in the old part of the map, lava death. One thing that Call of Duty needs to bring to it’s online maps is some form of destructibility. Not out and out destruction like Battlefield but something. I don’t know what that something is though.

One final piece about multiplayer is for players that are put off by the thought of going online and getting destroyed or abused verbally by a child thinking he’s the boss of CoD. Well, there is a new mode for you. It’s called  Combat Readiness Program. There is no leveling, there is no lobby and the games are filled with a selection of real players and bots. Players are not even listed by their gamertag. You are either Friendly or Enemy. This is a nice little add on for the ‘casual’ player.

The co-op mode in Advanced Warfare is a 1-4 player wave survival game with mini objectives thrown into the mix. The objective is to survive each round of increasingly difficult enemy waves. As you do this you could be tasked with defending a certain area of the map or to collect 20 dog tags that are scattered around. It is a fun diversion from the multiplayer but it does not have the appeal of the zombie mode from the Treyarch games. Those had big maps with areas locked off that you had to work to unlock, It also had a self contained story running through it. Exo Surival doesn’t have any of that. They have teased a zombie mode if you do beat Exo Survival. It’s DLC. Sigh.

Overall I had lots of fun with Advanced Warfare. The campaign was fun and actually told a decent story and the multiplayer took some risks that are paying off. If you left the series a while back or gave up when the terrible Ghosts came out last year, I suggest you take time and step back in to check it out.

Call of Duty: Advanced Warfare is available now on PC, PS3, PS4, XBOX 360 and XBOX One.

This year’s CoD is a nice surprise. Refreshing changes to multiplayer and a beautiful presented campaign make this the second best Call of Duty game ever.