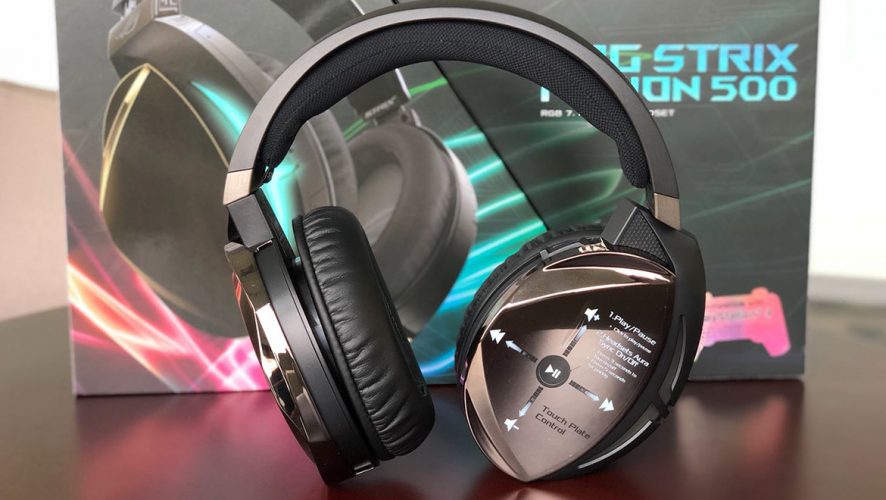 With its mirror finish casing lighted accent, the ASUS ROG Strix Fusion 500 looks to have taken plenty of aesthetics cues from its cousin, the ROG Strix Fusion 300, which technically isn’t a bad thing, since the design of the 300 is simple yet effective.

How does the 500 differ from its cousin? Well, the biggest omission here is the 3.5mm jack, replaced by a USB one. Next up is the mirror-finish on the headphone casing together with the RGB lighting, as opposed to the 300’s matte black finish with red LEDs. The new aesthetics is a good design choice, as this gives the headphones a more premium feel. 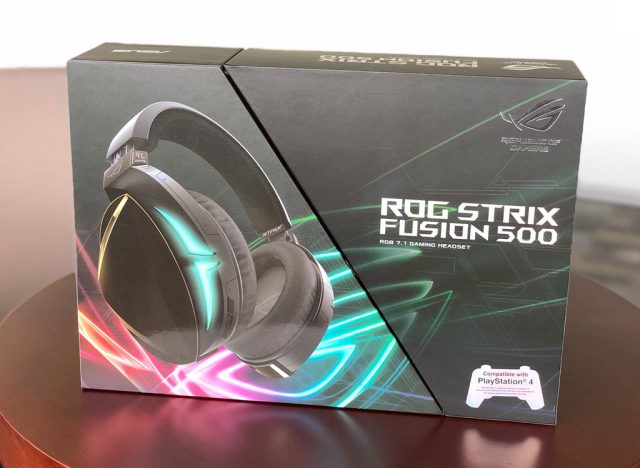 The 500 also comes with a built-in ESS 9018 DAC (Digital to Analog Converter), which promises 24-Bit/96kHz lossless playback with incredible dynamic range and ultralow distortion, coupled with a 9601 amplifier that allows for punchier bass. On paper, it means clearer sounds, less distortion and harder hitting bass.

The next major difference is the digital microphone, which allows for clearer, in-game communication thanks to its in-built processing algorithm. It’s also a smart mic that automatically mutes when you fold it up. The 500 also has a touch plate on the left side of the casing, allowing you to raise or lower the volume, swipe left or right or the next or previous track, or for playing or pausing an audio track. 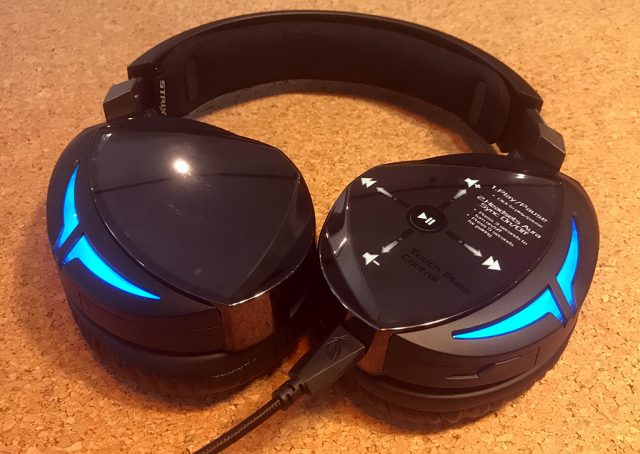 The 500 also comes with an app to control the RGB Lighting and effects via Bluetooth on the side of the headphones, but users will not be able to use these headphones wirelessly. Users may also control the lighting colors and effects using ASUS Aura Sync, the company’s own RGB control software on the desktop, which also allows to them to control other AURA Sync compatible items such as keyboards, mice and case lighting.

But if #squadgoals is your thing, you can use the Asus AURA Headset app, which allows you to be able to RGB sync multiple ASUS Strix 500s for the ultimate #squadgoals experience. 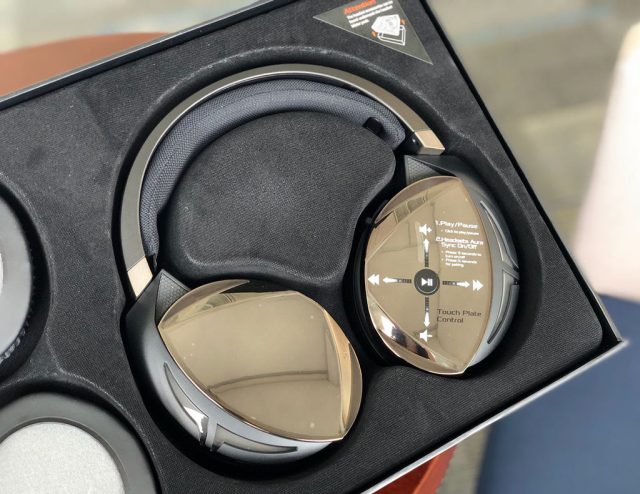 When using the 500s for the first time, users will be surprised at how comfortable the ear cups feel on the ears, and also the how gently the earphones clamp onto your head. The pressure is not too tight, but not too loose either. Even after prolonged gaming sessions, the earphones still feel nice and comfortable, thanks to ASUS’s hybrid ear cushion system. This utilises a mix of fabric mesh for the outsides of the ear cups, and leather for the insides, ensuring excellent comfort and minimal sweating. The oval shape design of the ear cups also allows for better fitment. 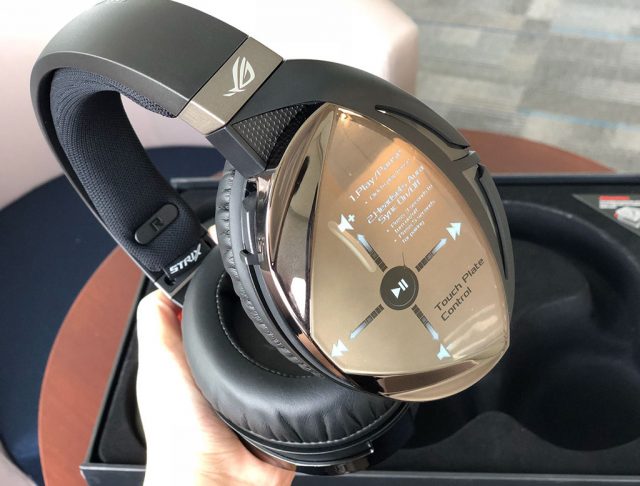 Whether it’s listening to music or gaming, the noise isolation on the 500s is superb, as users will find themselves isolated from the outside world once the headphones go on. The 500s seems to favour bass and treble-heavy music, such as hip-hop and R&B, more, and this is where the ESS 9601 amplifier shines, allowing for deeper and punchier bass.

There is a slight echo punching through though, and your experience may be different.

Gaming on the 500s was where it felt most at home, especially in FPS games such as Player Unknowns Battlegrounds (PUBG), where the virtual 7.1 surround actually helped to more accurately determine the direction of gunshots, as well as the sound of movements of an approaching car or enemy. It also made the endless cussing of my teammates much clearer, especially that one time when my mistakes led to defeat.

Ultimately, the 500s are an interesting set of headphones with plenty of hits, as well as several major misses. 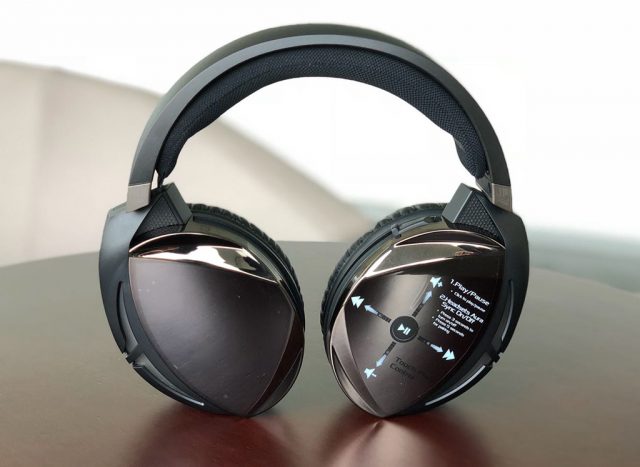 By removing the 3.5” jack, it reduces the connectivity of these headphones, limiting it to only be used with devices with a USB port. Including Bluetooth, but only for controlling the RGB lighting is also a missed opportunity to expand its range of connectivity to other devices, such as smartphones and Bluetooth compatible devices.

The touch navigation interface, however interesting, is very similar to that on the Parrot Zik headphones, which also sports the same interface as well. This feature also feels redundant, especially if you’re a desktop, user since the music control macros are usually built-in for most keyboards. Lastly, there’s the jaw-dropping price of S$349, which puts it far from being affordable. Those willing to fork out this amount will also have a larger selection of feature-packed headphones to choose from.

The price is probably due to the built-in AMP and DAC, so gamers have to decide if it’s worth the money. The ASUS ROG Strix Fusion 500 is available at all ASUS authorized retailers, at S$349.

The asking price is hefty due to the built-in AMP and DAC, so gamers have to decide if it’s worth the money. 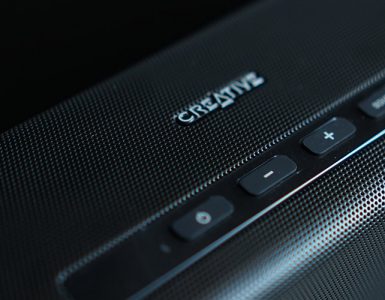 Creative is back again to bring greater aural pleasure from the cinema to your homes. 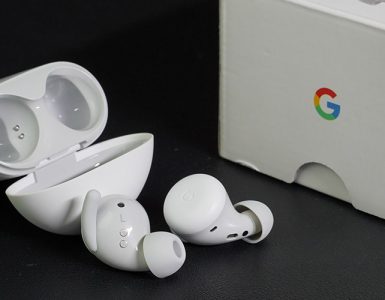