Hasbro’s Marvel Legends series 6-inch figurines have always been quality toys for both collectors and fans of the Marvel franchise alike. From characters and their variants in comic books, movies, and even games, Hasbro has never really disappointed with the sheer variety of figures with every wave they put out.

And now, you can stand a chance to win one of these brand-spanking-new figures: Venom and Black Widow!

The Venom figure you see, of course, is none other than the OG, Eddie Brock. The black symbiote has been a key figure in Spider-Man’s Rogues Gallery, and here he is, brilliantly represented in Marvel Legends. From the lolling tongue, to rippling muscles, and even his garish claws and teeth, this version of Venom is no doubt the most iconic version of the character there is.

Alongside him is Black Widow, as seen in the upcoming movie of the same name. Scarlett Johansson has always been brilliant as the super-spy Avenger, and it’s befitting that her character has finally been given her own standalone movie. This figure depicting her in her white suit is absolutely gorgeous, featuring multiple modular pieces, including gadgets, hand poses, and blast effects. There’s even a posing podium to boot, to allow for some even more badass posing and photo opportunities!

And now, you can stand a chance to win one of these figures courtesy of Hasbro Singapore. There are two Venom figures and three Black Widow ones, but you’ll only be able to win one, of course. To do so, be sure to watch our latest episode of Certified Geek first, then check out our giveaway below to see how you can win one for yourself!

To stand a chance to win one of these Marvel Legends figures, complete these 3 simple steps: 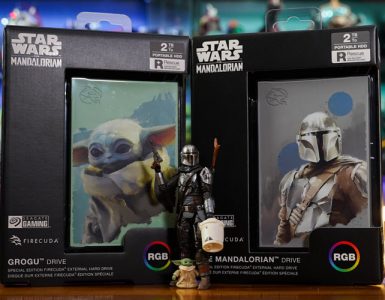 This is the way to celebrate the Force in style - Mando, Grogu or Boba Fett?