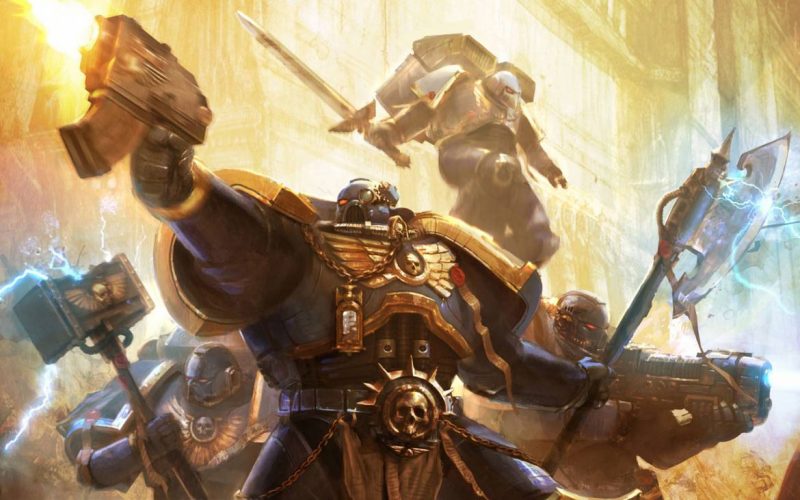 “In the grim darkness of the far future, there is only War,” goes the tagline for the second best selling miniature game of all time, Warhammer 40,000 (40K).

Made by Games Workshop (GW), the company also made another miniature game called Warhammer Fantasy but the company’s claim to fame (well infamy) were actually its business practices. It included a complete disregard for it’s customer base as well as a stagnant narrative for both Warhammer games.

However, amidst falling revenues and customers abandoning the GW ship, the company decided to turn things around with some big changes to its tabletop games. 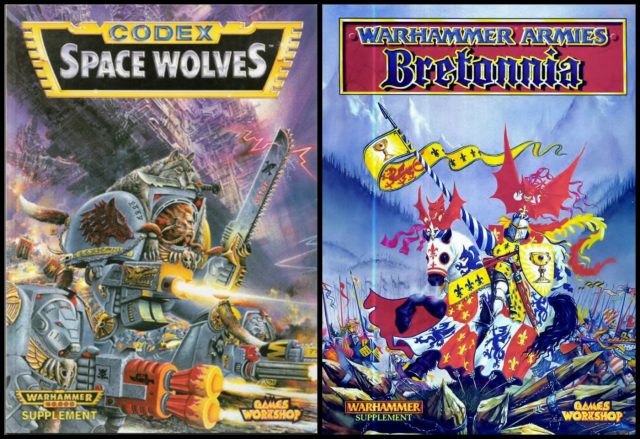 When I started in 1995 playing both games with the above pictured armies, it was a wonder to learn and play in worlds which were dark and gritty with established histories and narratives that allowed for one to play battles and campaigns in an open world setting.

That being said, once the overall narratives were learnt, I found out to my chagrin over the years that even if GW launched big story events, it had little impact on the actual setting.

This is because the company had a play safe policy and the storylines were not allowed to progress. For if there were no change, there would be no repercussions of change.

Stagnation, however, did become a problem. Most players of GW games not only liked the game but were heavily invested in the storylines, too.

It became so common that, for example, if there happened to be a villain character in Warhammer 40K called Abaddon the Despoiler who led the Black Crusades in a massive event, players would pretty much shrug their shoulders and move on, as they knew in the end the Imperium would win and nothing truly significant to the story would happen.

But it wasn’t just the stagnant storylines that led to GW’s decline.

The rise of computer games also led to falling sales. This caused GW to increase the prices of its products and it almost became a yearly event to the point many could not afford the game, including myself. 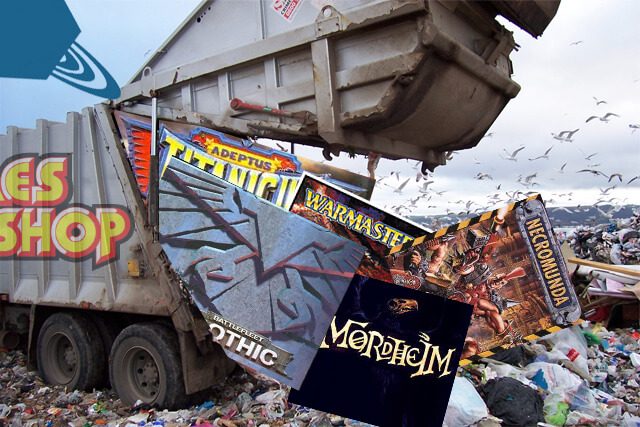 Add on GW’s liberal use of its legal team and its many ‘strategies’ to force players to buy its products resulted in an increasingly unhappy and vocal customer base, which then caused to GW actually quit of all its social media (Facebook, Youtube, Twitter). For a summary on GW at the time, watch the hilarious but exaggerated video made by the team at FlashGitz below.

This situation would go on for years, with similar sounding annual reports of a shrinking player base. Other companies, sensing opportunity, would starting making new games to fill up the void such as Kings of Wars and Dreadball by Mantic Games or Frostgrave from Osprey games just to give some examples. Things looked bleak for the future of GW and still nobody believed the company would change…until it actually did. 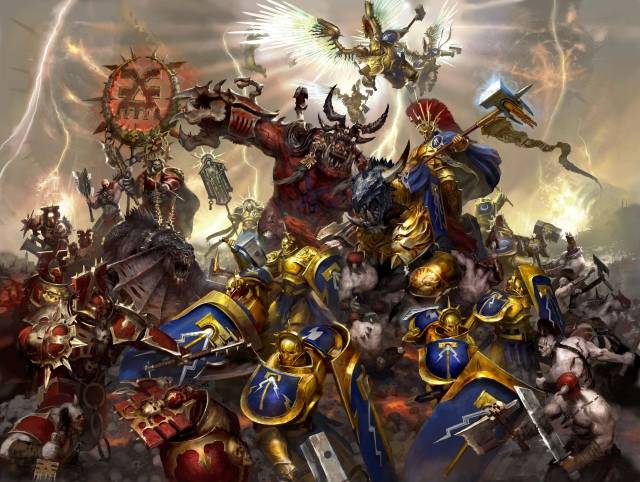 The first major change of note that took everyone by surprise was the End times leading to the end of Warhammer Fantasy as a ruleset for massive armies who fought in formation.

From that came a whole new game called the Age of Sigmar, a extremely streamlined game with rules you can start playing that filled about four pages compared gigantic rule tome that players had before. 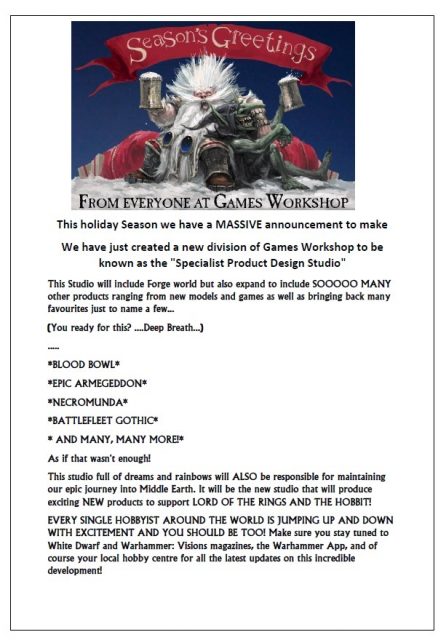 Also, the narrative had not just moved for Warhammer, it had truly progressed. The massive change of the game completely took everyone by surprise and there was backlash.

Customers boycotted GW, vented on the internet and in a viral video, one player even burnt his army with lighter fluid.

Even as I was sad to have a storyline I had kept up with since the 1990s disappear, it made sense. Warhammer Fantasy sales were poor and the game’s complex ruleset and large expensive armies made the game almost impossible for newcomers to get in the door.

Many of these issues were taken into account with Age of Sigmar. GW even released new rules that allowed all of the old armies from Warhammer Fantasy to be playable in Age of Sigmar. Although these were imbalanced alpha rules, it showed that GW at least cared enough to not abandon its existing customer base as it had many times before.

Of course, the change to Age of Sigmar still had its fair share of controversy but then like the story of Scrooge in a Christmas carol, GW started to do all kinds of good things that garnered praise from the majority of the community.

First it brought back the specialist games like Necromunda and Blood Bowl. GW had also returned to YouTube though uploads were sporadic at best, spread across multiple channels.

Its YouTube channel really took off when Warhammer TV started with regular uploads with all sorts of content. Things such as new releases, unboxings, game designer interviews as well as painting tutorials which focused rightfully on beginner painters.

The painting tutorials seemed to rival even the bigger channels that do painting tutorials for quality and ease of viewing. GW also seemed in recent years to finally take note of the competition and hobby market by releasing cost effective boxed deals and starter boxers for both Warhammer 40K and Age of Sigmar. 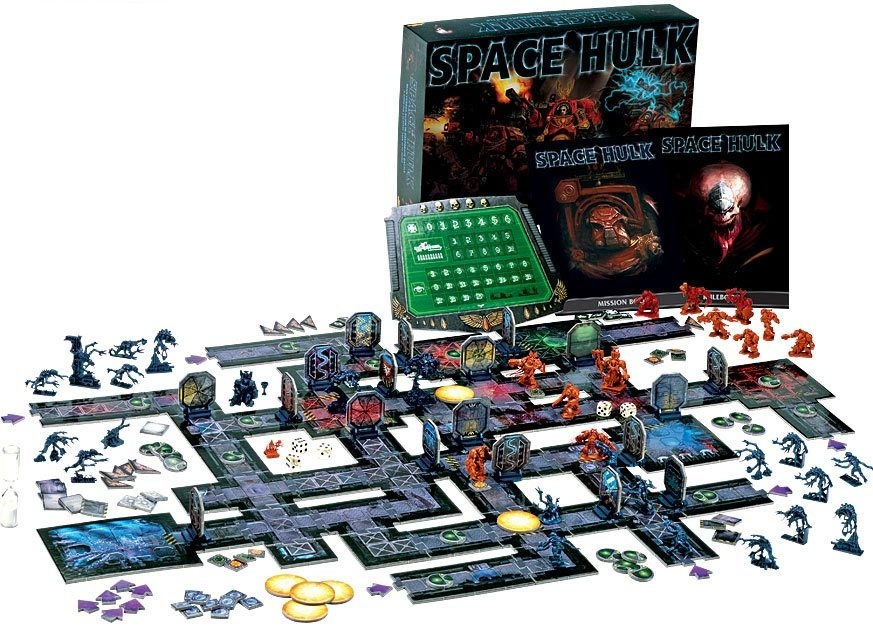 The return of the specialist games market also meant GW were in the boardgames market once again, thanks to re-releases like Space Hulk as well as new IPs like Gorechosen.

GW started tapping into the revival of the boardgaming hobby and started sending copies to online reviewers to promote its products even though there was a possibility of a negative review.

This was something unheard of for the old GW. The best proof of the new GW was when GW released a FAQ on one of their rulesets on Facebook.

When commentators asked why the FAQ wasn’t made as a downloadable PDF, the reply was that it was released only as such so that the community could look at it and give feedback on ideas and improvements before it was finalized.

All in all, GW seems to have turned a new leaf and has breathed new life into the miniature community. The return to board games has even allowed for customers on a budget to support them with a game purchase, such as at the official Games Workshop Warhammer Red House in Singapore, without completely going bankrupt.

Lastly, the company’s flagship brand, Warhammer 40K, is likely to get a massive progression in its narrative soon. While it may not become a futuristic Age of Sigmar equivalent but it’s likely definitely to draw in returning 40K fans as well as new ones.