Winter is coming next April, as fans gear up for another round of fear, hope, despair, and wonder in Game of Thrones‘ (GoT) upcoming eighth season.

But before that hits international shores, the resident whisky-cum-GoT lover can opt to drown all their show-related angst and sadness in alcohol first – not just any type of it, but one’s that themed after the hugely-popular series.

Or rather, eight of such.

Following the launch of Johnnie Walker’s line of GoT-inspired scotch, the team is venturing further into the department with an eight-whisky collection that each represents one of the Houses of Westeros or The Night’s Watch. Adorned with their respective crests, these bottles contain proper Scottish whisky, with individual houses being paired with whiskey distilleries from across Scotland: Royal Lochnagar with House Baratheon, Dalwhinnie with House Stark, and Lagavulin with House Lannister.

In stark (ha) contrast to its clear-bottled counterparts, The Night Watch’s version takes on the dull, dark tones of its sigil, and comes decked out in a classy black exterior. Along with the other seven, it can be purchased off Drizly for anywhere between US$30 and US$150 – though GoT enthusiasts in Singapore may wish to opt for the White Walker by Johnnie Walker scotch instead, which is now available on local shores. 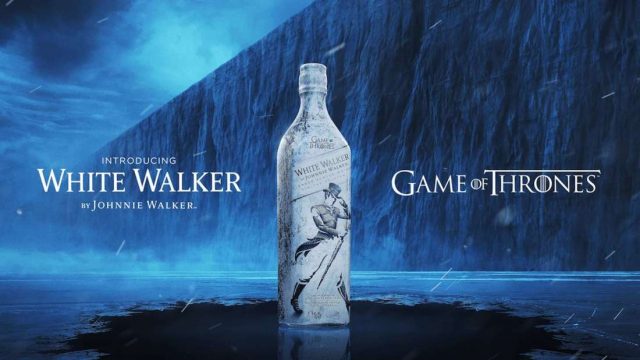 Inspired by the colour scheme of the Night King, the bottle is designed primarily in hues of icy white, with spidering touches of blue seeping through. It bears notes of caramelised sugar and vanilla, fresh red berries with a hint of orchard fruit, as well as Single Malts from Cardhu and Clynelish, which brings out the true flavour of Scotland’s Northern distilleries. It’s all about the North, man.

Available at The Bottle Shop, Redmart, and Cold Storage, White Walker by Johnnie Walker retails at a reasonably-priced S$75. Or, if you’re returning from an overseas trip, it is available for S$68 at Singapore Changi Airport’s DFS store (as shown above).

With Christmas just around the corner, both this and the eight-whiskey collection would make for the perfect geeky gift…or you could place it in your stash first, and only consume it while watching the first episode of the season finale.

Alternatively, you can save the alcohol for the last episode, and celebrate (or cry) over the end by taking a shot every time a character dies.