The physical iteration of E3 2020 may have been cancelled due to the COVID-19 outbreak, but the spirit of gaming still continues to live on in the form of live streams and event broadcasts. Enter the Future Games Show, the first-ever digital showcase hosted by GamesRadar+, that unveiled a slate of over 30 titles, ranging from highly-anticipated heavy hitters to indie works.

Here’s what to expect for the…well, future of gaming on console, PC, and mobile.

In Quantum Error, it seems there will be no room for error while making your escape. Crawling with lingering discomfort and tingling chills, the game promises plenty of thrills, and is set for a release on the PS5.

Boasting a unique, Borderlands-esque artstyle, Dustborn is a story of love, family, and choice, with an added touch of ghosts and robots – quite the unconventional combination. The indie title will head to next-gen consoles and PC come 2021.

Being a samurai is cool and all, but imagine being a samurai while doing parkour. In the futuristic world of Ghostrunner, players can run, scale, and leap over platforms to execute slick slashes. With a new Cyberspace level, as well as new enemies, and abilities, there’s a lot more in store when the game releases later this year for PS4 and Xbox One. A demo is already out on Steam.

Call of the Sea

Call of the Sea certainly turned some heads when it was first announced at the Inside Xbox presentation, and it’s easy to see why. Beautiful visuals, a strong narrative, and puzzle exploration are the pillars of the game, which is poised to launch “soon” with a hitherto unannounced date.

Everyone knows about the legacy of Sherlock Holmes, but not even the world’s greatest sleuth started out with a perfect slate. Sherlock Holmes: Chapter One goes back to the youthful years of Sherlock, as he explores an open-world setting while solving mysteries. The game is primed for a 2021 launch.

A modern repackaging of the retro bullet hell genre, Cygni: All Guns Blazing sports a splash of vibrant hues, and is set to deliver absolute shooting mayhem when it drops on PC sometime in 2021.

Morbid: The Seven Acolytes is a love letter to the action-RPG and gothic genre, with a welcome touch of top-down goodness. Players will have to gather new weapons, upgrade their attributes, and fight their way through a world filled with steampunk paraphernalia, while maintaining their character’s sanity levels. That’s some mad multi-tasking happening!

This one’s for fans of arcade racers. Hot Shots Racing sports colorful, retro-inspired graphics as players take to the asphalt – either alone, or together with friends. Spring 2020 is the date to look out for.

The classy black-and-white noir thriller Liberated will be heading to PC with improved graphics and full voiceover, which gives it an extra flourish.

From the minds that brought you Overcooked, Neon Abyss is an upcoming rougelite run-and-gun, and then some. Apart from the usual shooting action, the game offers players various pet companions (that can be hatched), and a host of funky mini-games, including piano and dance performances. Say what?

Grab your skateboards, and round up all the best tricks you’ve got. Skater XL is the ultimate test of creativity, style, and perfect execution, where only the best of legends will have their legacy remembered.

GTTOD, or Get To The Orange Door, is exactly what it is. In this game, players will equip themselves with different firearms, and eliminate enemies while getting to the objective. Oh, and did we mention the use of bow and arrows too?

A dive into the psyche of a person in coma, Walking explores the wonders of he human mind. Here, players will experience a string of memories while fighting for their lives on the hospital bed – a bold, brave step into novel terrority.

The sci-fi sequel to Bomber Crew, Space Crew puts your management skills to the test, as you juggle between battling aliens, keeping afloat, and steering away from disaster.

Maid of Sker is not for the faint-hearted. Through the use of a 3D audio-based AI system, the first-person horror game sees beasts pursuing players with every small creak from a rickety floorboard. Not cool.

Larger and more expansive than any other content released, the Remnant From The Ashes: Subject 2923 DLC is set a year after the base campaign, and comes with plenty of gunfire excitement in tow.

A win for the board game community. The Captain is Dead will be getting a video game adaptation, filled with the madness, chaos, and hilarity that follows the original.

If there’s one place to flex your creative muscles, it’s Main Assembly. A building sandbox game boasting an advanced physics system, the game allows for the creation of virtually anything, from cars and planes, to ridiculous, ingenious builds like giant spiders. Creativity knows no bounds, indeed.

Toy Story had toys coming to life, and that’s what will be happening in the world of Blankos: Block Party. Hang out with your fellow vinyl toy peers, take part in global challenges, and create mini-games – it’s all pretty fun and relaxing.

Last Oasis might have started off rocky, but it’s slowly getting in the good graces of gaming enthusiasts. A gameplay reel showcasing the all-new volcanic biome mechanics is a good step.

The new trailer of Wasteland 3 is highly reminiscent of the Fallout series, bringing loads of post-apocalyptic action and gunfire chaos.

A survival horror, Remothered: Broken Porcelain promises a chilling, haunting hide-and-seek adventure, and offers new powers in tow – not for combat, which you should be avoiding, but for investigation purposes.

Disintegration revolves around the concept of transferring human brains to robot bodies a la HBO’s Westworld series, and will feature a unique mix of the first-person shooter and real-time strategy genres.

In an alternate timeline, World War II never ended in 1945. Paradise Lost follows a 12-year-old boy, who stumbles upon a lost bunker in Poland, and goes on a search for answers after encountering a personal tragedy. Be careful while making your decisions, for they will affect the flow of the game.

Operation Tango is snazzy, zany, and more than stylish. The co-op spy title puts players in the shoes of either an agent or hacker, who have to work with the other to save the world – it takes two to tango, after all.

Making its debut in the PS5 reveal event earlier, Kena: Bridge of Spirit impresses with beautiful, breathtaking visuals, and an adventurous spirit.

The stealthy murder mop-’em-up title Serial Cleaner is getting a sequel, and it’s going to be called Serial Cleaners, with an ‘S’ at the back. Expect plenty more exploration, stealth, and gameplay variety, now that there are four different workers to pick from.

Apart from the above game announcements and trailers, the Future Games Show also looked into the technology of next-gen consoles, and how it will affect the potential of the current gaming scene. From what’s been gathered thus far, gaming enthusiasts will have plenty to look forward to – and not just the heavy-hitting AAA titles, but the smaller-yet-no-less-impressive indie entries as well. If you’re on the prowl for more upcoming releases, the PC Gaming Show and The Escapist Indie Showcase have got you covered. 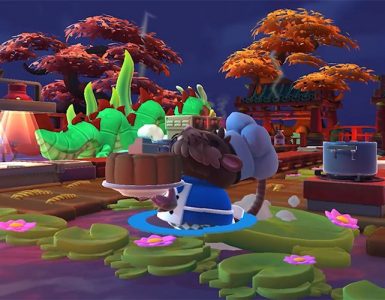