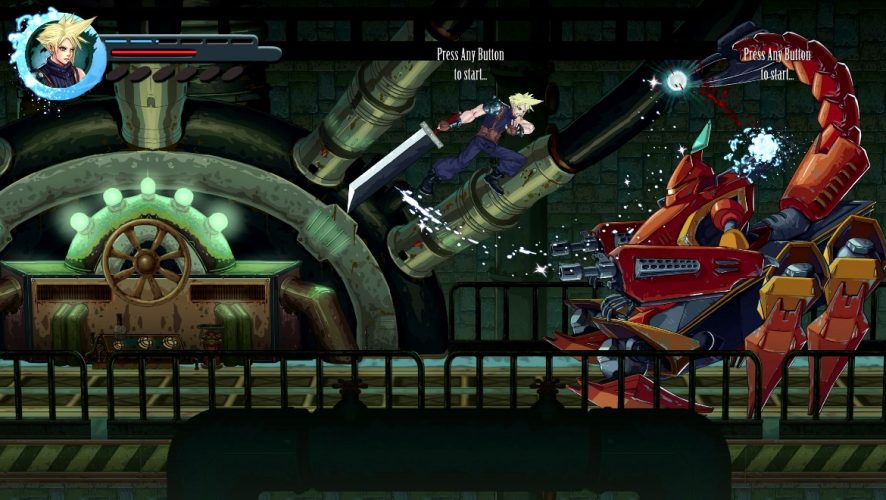 What happens when a bunch of die-hard Final Fantasy VII fans can no longer wait for a remake of FF7 to release? Re-imagine it as a classic 2D side-scroller action game and do it yourself! Singapore-based game studio, PD Design Studio, did just that, and the results thus far are nothing short of brilliant!

First there was the Singapore fan-created 8-bit Tiny Avengers game demo created by Raymond Teo, and now this. The future of game development in Singapore is looking mighty bright, especially if either or both of these fan projects get picked up and made into official products!

Here’s a little background about the game from the developers:

Final Fantasy VII: Re-Imagined is a project made by fans of the original game. We re-imagined how the game would be like if it’s an action game. Classic 2D Side-scrollers, such as Dragons and Dungeons: Chronicles of Mystara, Streets of Rage, etc, came to our minds. We thought about how we can incorporate some of the FFVII game play elements, such as Materia and summoning of Guardian Force into a Hack and Slash genre. The result is what you can see above.

This is a short 1 playable level demo. You get to play as Cloud or Tifa, or co-op locally (you will need at least 1 controller to go with your keyboard). Barret works as a fire support for you. He’s on a timed recharged system. You can only call for him when there is at least 1 blue bar.

The green gem in the game allows you to summon your Guardian Forces. You charged it up by inflicting damage on enemies. For simplicity sake, Cloud is equipped with Ifrit by default, and Tifa with Shiva. Rightfully, if this is a fully developed game, players will be able to equip their Guardian Forces as they acquired them in the game.

As for Materia system, we built it into the players’ attack. Ideally, they should be collected as players progress in the game. Again for simplicity purposes, both Cloud and Tifa comes pre-equipped with Fire, Ice and Lightning. At the end of a 4 hit combo, the Materia will be effected. Ice will freeze the enemies for X seconds for players to continue hitting them. And when the freeze ends, an extra damage is dealt to the enemies. Certain enemies are immuned.

Fire Materia creates a fire ball that moves slowly to hit enemies along its path. An explosion at the end deals extra damage.

Lightning Materia stuns the enemies. Any other enemies that comes into contact with an electrocuted enemy will get electrocuted as well, somewhat like a domino effect, but with a “taper off” to prevent abuse. Unfortunately, this feature is not fully developed for this demo. We may update in future if we come around doing it.

In the spirit of any RPG games, these Materia can be upgraded. Players accumulate experience points and can choose to upgrade various stats, such as Materia Levels, number of Summon Gems and Fire Support Bars, and even the playable character move sets.

Best of all, you get to play the first level right now, on your web browser, or download it directly to your PC. Better hurry while it’s still up! Head on down to www.ffvii-reimagined.com and give it a spin. It is the 1st playable prototype, so bugs will be present, but who cares, you get to kick butt as Cloud or Tifa!

More screenshots from the project for your viewing pleasure: