As another year goes back and the month of October rolls around, EA is preparing another iteration of the immensely popular FIFA franchise for players to kick off. For the upcoming FIFA 22, the gaming giant is promising some interesting additions that will move the needle slightly in terms of gameplay. While scepticism will serve players well, it remains to be seen just how impactful the new features will be when you take to the virtual pitch.

While more details will be shared in the coming weeks and months about Ultimate Team, VOLTA, Career Mode, and Pro Clubs, we are going to be focusing on the foundations of gameplay. Look out for the rest of those once their respective embargoes lift.

HyperMotion – This Year’s Cherry On Top

Powered by the new generation consoles, the Hypermotion technology is the biggest change coming to FIFA 22. Simply put, this gameplay technology is touted to revolutionise how players will look at digital football.

Limited to the current generation of the PS5 and the Xbox Series X|S consoles, the developers explained that the ceiling of the previous generation restricted innovation and further features that would make new entries different. As such, the increased computing power and storage does not just up the ante, there is untapped potential for the future as well.

At the core of it are two main pillars – advanced 11v11 match capture and machine learning. EA is leveraging on the tech behind Hypermotion to elevate FIFA 22 into a more responsive, realistic, and fluid gameplay experience.

For comparison, previous games have seen animations being captured in motion capture studios that would be familiar to most gamers. With the limited space and setting, it usually resulted in the canned animations players of FIFA are used to.

With the advanced 11v11 match capture, EA is capturing animations directly from the pitch in a real match environment. This allows for expressions of true technique, athleticism, and explosiveness that the modern game of football demands.

If that is not enough to tickle your fancy, machine learning will hopefully get you to the next level of excitement. With the animations captured using the advanced 11v11 match capture, the AI is also being trained to learn how footballers move in real-life, and replicate that in FIFA 22.

The machine learning algorithm learns from over 8.7 million frames of data obtained from the match capture, and in real-time, creates animations that translate into the most natural, football way to approach a situation. Whether you are trapping a ball from the air or a driven pass, going for the spectacular volley or last-ditch tackle, it is all going to feel natural and not a forced animation.

Theoretically, the more games that are played, the better everything will feel and play out on screen, and that bodes well for the future of animation and motion capture as a whole. Every area you could think of that is important to football – passing, dribbling, tackling, shooting – will be enhanced with the tech.

For a series that has been rightfully slated for rehashing the old and staying largely the same, the same cannot be said on the animation front this time around.

Of course, that is not all you can expect out of Hypermotion technology.

EA has also made more tweaks under the hood when it comes to the AI supporting the player. On the offence, your teammates can now make up to six times more decisions per second as compared to the past, so you can expect better and smarter runs, and more support on the attack.

On the defending side, AI defending has gotten a brand new coat of paint as well. While the argument against zonal and man-marking can continue until the cows come home, at least in FIFA 22, you know that everyone is on the same page.

Defenders will prioritise zone defending and move and press as a unit, rather than risk being pulled out of position as much as possible. Intelligent defending may not always have been a calling card for FIFA, but it might very well come to fruition this year.

Ever felt that headers and anything in the air felt unfair and inconsistent? You are not alone, and EA is trying to fix that with Hypermotion and kinetic air battles. In FIFA 22, every time there is a contest for an aerial ball, it becomes a new experience that plays out.

Expect to see cleaner outcomes that make more sense thanks to the advanced computing power afforded by the new generation.

Another key area of improvement in FIFA 22 made possible with the new animation tech is dubbed composed ball control. When it comes to ball control, there can be a multitude of factors that determine how a player can get it to their feet and carry on with the play.

Unlike in the past, you are not locked into any given animation before receiving said ball. FIFA 22 allows your players to combine fluid motion while at the same time, intelligently protecting the ball with their first touch to keep you in control.

While the bells and whistles are certainly reserved for the latest and greatest consoles, EA is treading carefully as to not exclude their other fan bases from too much. There will also be a set of features that will make their debut for players who have not upgraded to the new generation just yet.

A potentially annoying addition could be explosive sprint. Essentially, the game wants you to rethink how you go about utilising speed in your game. For both sides of the field, explosive sprint could make a big difference.

Mirroring how defending actually works, you can no longer just sprint directly at the attacker and hopefully get the ball off them. Defenders will have the same explosiveness as attackers, so you could easily overshoot your target. If you put two players with the same stats side by side, ideally, they should be on par.

Making the difference count is going to be the key to beating your man, as well as the mind games of when you are going to explode down the wing in a burst of speed. Balancing will be vital when it comes to explosive sprint, so watch the space as the community comes to grips with it.

FIFA 22 will bring about a brand new goalkeeper system that will hopefully deliver in three aspects: more reliable saves, more personality, and an animation refresh.

The first is perhaps the most important in the game, as we are all used to horrific and hilarious errors in the goalkeeping department that only frustrates players. Perhaps that will no longer be that big of an issue in FIFA 22. Having more new stuff to look at is neat, and goalkeepers could always do with more love considering their importance in the team game.

For the skillers, the game will definitely be adding more skill moves to the arsenal of those who love to trick your opponents and troll others online.

Catering to community requests, tactics can now be set up for situations where you are still in your own half or in the opposition’s. This way, you can spice up how you build up the play, and catch your opponent off guard.

Every new iteration of the series seems to promise better physics, and FIFA 22 is no different. Taking a different approach this time, the developers are hoping to replicate ball movement in the game that is authentic and more true-to-life.

For the tacticians that love to understand more about the game, FIFA 22 is ensuring you get your information when you need it. Statistics like expected goals, pass completion, hot zones, and more will be presented. This way, you can more reliably impact the game with your decision making.

Although the jury’s still out on whether FIFA 22 is going to fundamentally improve and change things, it is still fun to see just what the developers are trying to do to improve each year.

With Hypermotion Technology at the core, players can expect to enjoy more of the Beautiful Game, and hopefully, have a ball of a time this coming 1 October. More details regarding the other aspects of the game will be debuting soon, so stick around if you want to find out more about FIFA 22. 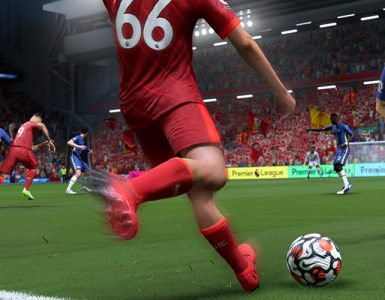 EA stands in support of Ukraine.