Inside a cosy, homely hotel room, notes and recording devices line the table. A comfortable silence washes over the small space, as a hint of hushed excitement lingers in the air. Time ticks, and the familiar clicks of high heels echo through the walkway, only for each step to increase in amplitude. Mere seconds later, actresses Martha Higareda and Dichen Lachman make their appearance, sporting warm smiles on their faces.

For the uninitiated, here’s some context: Altered Carbon takes place in a highly-futuristic world where death is rendered obsolete through the act of “re-sleeving”, in which an individual is brought back to life in a new body. The story revolves around protagonist Takeshi Kovacs (Joel Kinnaman), who wakes up in a new body, or “sleeve”, after 250 years on ice (aka dead), with one chance to win his freedom: by solving a mind-bending murder. Higareda plays Lieutenant Kristin Ortega, a smart and tough cop with an unhealthy interest in Kovacs, while Lachman is Kovacs’ sister Reileen Kawahara. 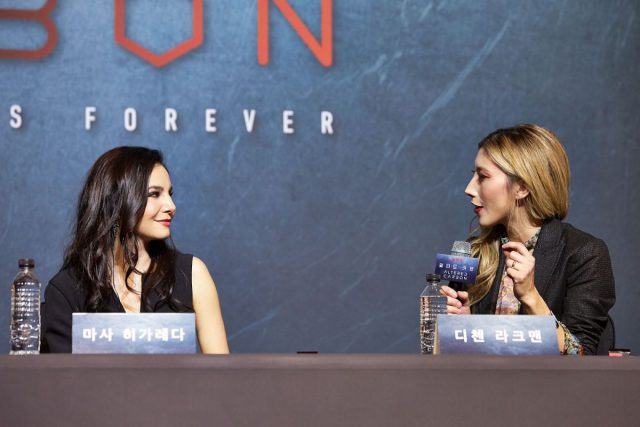 The duo take their seats, greeting everyone with cheerful pleasantries. Higareda spouts enthusiastically, “It’s an honour to be here”, and the interview starts.

But really, the honour is ours.

A light-hearted question to kick off the session, on the sleeve they would like to don. Higareda said that she would like to be The Rock if she ever got the chance, alongside Lachman’s response of wanting a different experience.

“Something different to me would be exciting, but there are a lot of questions about that, because it’s a fun idea to think we can be anybody or look like anyone, be any race, gender, anything you want to be,” she expresses. Things quickly turned introspective, however, as she continues to elaborate:

“Is there how we should think, though? There are a lot of ways now you can change yourself, (and) you can augment pretty much anything on your body, but should we? Is that what we want to spend our time doing? Or should we be putting up time to be of service to each other?” 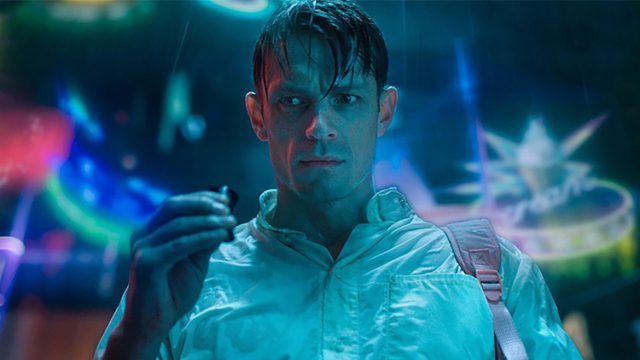 Ah, the intricacies of morality – one of the core values heavily addressed in Altered Carbon. Who are you? What does immortality mean? What does it mean to be alive? Higareda believes the show has touched upon these deep questions.

Despite the heaviness of the topic, conversation retains its intended lightheartedness. Hiagreda’s chemistry with Lachman is one charismatic showing, and all talk between them flows as natural as how resleeving is to the Altered Carbon world. There’s a lot of good-natured ribbing, fond moments of reminiscing, and perhaps the best example was when discussion delved into the theme of explicit nudity.

And while it certainly sparked a lot of interest from those present, perhaps the most enthusiastic one of all is the duo, whose eyes are lighting up in excitement with a sparkle of mirth and amusement.

Lachman explains how the famous Reileen-Ortega faceoff came to happen in the show, relating that the logistics for that one scene was “one of the more complicated things they did on the show”.

“There are so many body doubles who have to look like Rei(leen), then there’s the nudity where I’m completely naked. I’m completely naked, from head to toe, and you see everything,” she reiterates with a laugh, “So when you’re fighting naked with a weapon, and there are pieces of glass which aren’t glass but silicon pieces that turn in sand when they break, it’s very slippery; the entire floor feels like you’re walking on ice…and there are like eight other girls lying naked on the floor, with tons of men on that day –”

“Lucky men”, Higareda cuts in unabashedly, and the tongue-in-cheek statement came so abruptly that everyone started bursting into loud guffaws. Letting her playful side take the reins, the actress continues to recount her tale of how she’d texted one of her male friends, “you wish you’d been here tonight”, and the previous bouts of laughter instantly became full-blown hilarity.

For all of the laughs, Lachman admits that there was an initial psychological hindrance on her part to get over the nudity, and credits the progress to her on-screen character, who “would have no problems doing that”. 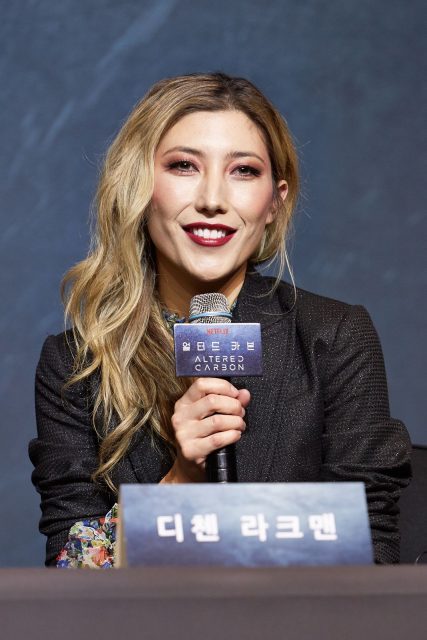 Wrapping up the interview on the note of female empowerment, the actress notes that sci-fi is a genre where “there’s an effort to make women strong and diverse”, and the area “that has given women a lot of opportunity to play powerful roles”, citing Star Wars’ Princess Leia as an example.

The timer rings, and the affable duo bids a final farewell before walking out of the room. In wake of their departure, a sense of awe bubbles to the surface, alongside the all-too-familiar nervous anticipation for the remaining half of the group.

The arrival of Joel Kinnaman and showrunner Laeta Kalogiris throws the room into sudden attention. Where Higareda and Lachman exudes an air of casual confidence, the other two members give off a commanding presence, though no less welcoming.

Chipping in with a “How do you do” garners an united response, which draws out smiles from both. Kinnaman brings his charm into play for the first question, enough to any remaining jitters to melt away, and Kalogiris follows easily. A powerful pair, this is.

The topic? Sex and nudity, of course.

“Sometimes, we have to fight naked, then we combine it all (together with the action sequences),” he chuckles good-naturedly. 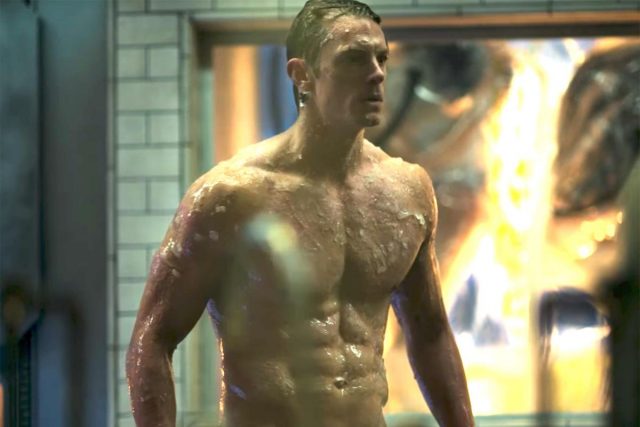 Kalogiris quips in with a witty quip, “It’s actually not a joke, it’s really true, wow,” and the straight tone that it’s told in elicits some barks of laughter from those in attendance. Kinnaman drives the points home by revealing that he was naked on two of the three shooting days on set, though it was admittedly “a good process”.

Moving deeper into the intricacies of Altered Carbon, the showrunner broke down the show skeleton into easily-comprehensible parts. The careful thought process and detailed consideration were shown through the effort of scouring for inspiration, including architectural designs.

“I’m friends with the author, so we’ll talk quite a bit about the way he imagined the world, and I have a brilliant costume designer, so we sort of build the world from inside out together,” she shares, “A lot of it was partially due to the influence of William Gibson’s version of The Sprawl that he wrote in his books starting with the idea of east-meets-west… but it was also the architecture of Zaha Hadid, the conceptualisation of a world where people who have more will physically try to remove themselves from the those who have less.

A lot of this was inspired by the Burj Khalifa in Dubai, because of the way the house is covered and the cloud that comes with it, and just the sense of being separated… some of them have overlapped with shows like The Blade Runner, but most of them are taken from the same common world that Blade Runner was pulled from, explained Kalogiris.

Kinnaman notes how the process helped to set Altered Carbon apart from other adaptations in the market. He states, with a tinge of pride, “The thing that always happens when you make a feature film out of a novel is that so much gets lost, it’s like you’re making a novel into a short story, and here, we are telling a novel, but in a cooler way.”

It may be quite the bold claim, but after months of tough training, that little bit of pride is definitely well-warranted. 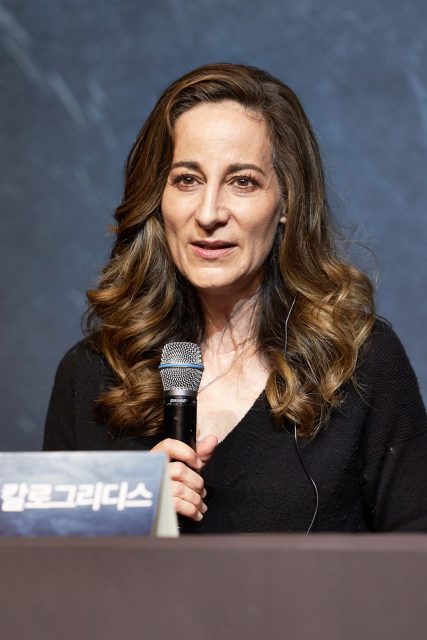 When the show was first teased, there were some reports about whitewashing – a common topic of interest for Western films. Instead of taking personal offense, Kalogiris confronts the issue calmly with a knowing quirk of her lips, lying out her thoughts.

“For me, when I read the novel, it was very specific that Takeshi Kovacs is sleeved as a white guy when he arrived at Bay City, and it’s a piece of the story that’s not really made much out of… and because I felt concerned about whitewashing, I made the conscious choice to try and create more than what’s created in the books about Kovacs’ life earlier, and cast not one, but two Asian men to play that.

And what we were able to do with Will (Yun Lee) was to create an entire backstory that didn’t exist in the books, about his sister, about his life, about joining the Uprising, and he’s a big part of it, and much more so than the books.”

She stresses that whitewashing makes her deeply uncomfortable, citing Ghost in the Shell as an example, and that it isn’t meant to “downplay how big of an issue it is”.

Rather, it’s more about “hoping that the industry is rising to understand that there are just some things you have to honour about the character, just like how one will never cast Wonder Woman as say, a very short white guy.”

Following the controversial subject matter, conversation flowed back into the territory of fun and lighthearted topics. When asked who each of them would like to visit as a new sleeve, the showrunner throws out the name of free diver Tanya Streeter, whose breath-holding capabilities are looked upon by her.

Meanwhile, Kinnaman was made to choose between his iconic on-screen characters, such as Rick Flag from Suicide Squad, and RoboCop’s Alex James Murphy. With a mirthful face expression, he reveals that he’d take Kovacs instead, much to the glee of Kalogiris, who belted out a teasing “thanks” in light of his decision.

The highlight of the interview, however, is his final reply to a question which involves his wish for the world if he were to wake up 250 years after, just like Kovacs himself. 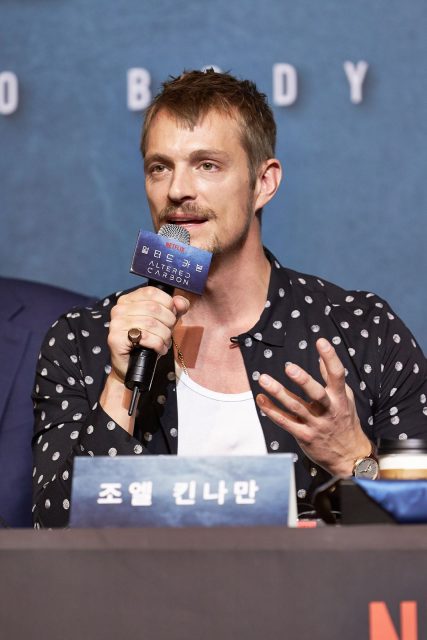 He gives the serious answers: solving the question of the dying oceans, humans not waging stupid wars, unity between people to gather resources to explore space.

But then, his smile grows into a cheeky smirk, and he quips: “And hopefully we haven’t invented this technology that Trump is living forever.”

The applause and laughter that emerged lasted for at least ten seconds, as the man himself basked in smug satisfaction.

Way to end everything off with a bang! 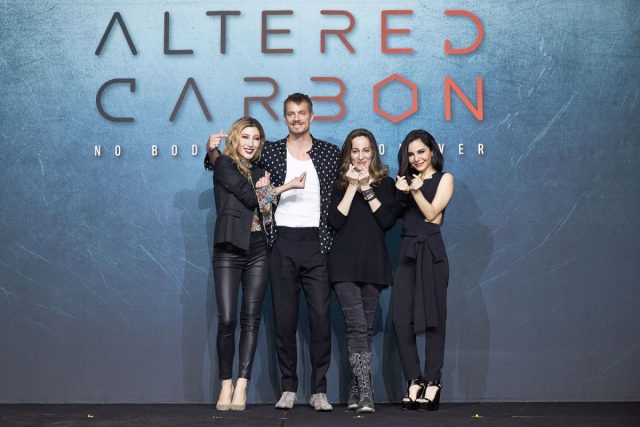 Catch all 10 episodes of Altered Carbon on Netflix from February 2, 2018 onwards.