Hot on the heels of Ubisoft’s press conference is Kinda Funny Games with their second showcase at E3 2019. Much like last year, Kinda Funny Games presented 60 indie games, some are brand new, others are games that have already made their big debut but will be making the move to console very soon.

With that many indie titles announced, there is bound to be a game for everyone, from the retro 2D platforming games, to the more modern zombie survival games. However, not all the games announced were brand new.

In case you missed it, here is a look at all the new games that were announced for the first time during the Kinda Funny Games Showcase, and a brief look at the others.

Stronghold: Warlords is Firefly Studios next entry in its real-time strategy series that first released in 2001. This time, the game is set in ancient China, between the third century BC and 1200 AD. One of the biggest upgrades coming to Stronghold: Warlords will be the ability for players to command, recruit, an upgrade AI warlords. Each will come with their own perks and characteristics, opening up new battle strategies to win the game.

Stronghold: Warlords will be coming to PC in 2020.

What happens when the supernatural and digital meet? That is the question Kitfox seeks to solve with their newest game, Lucifer Within Us. You will get to play as an exorcist of sorts as you run around trying to solve the mysteries surrounding a murder in a world that seems incredibly reminiscent of other shows that has technology on the forefront such as Black Mirror and The Matrix.

According to Kitfox creative director Kim JongWoo, who was interviewed by Venture Beat, “The game takes place in a futuristic theocracy in which the digital is the spiritual. Imagine if an ancient culture developed while having access to information technology, and therefore its religion incorporates entities that exist in digital space.”

Pilot as an upgradable ship as your journey through space, taking down waves of photorealistic shapes that come your way in interesting shades of colours. The key to survival in #Funtime is with swapping out your colours for something more suitable. #Funtime is an arcade-style twin-stick shooter game that according to its developer One Guy Games is easy to pick up and difficult to master. How true is that statement, we leave it to you to decide.

A “romantic narrative-adventure” featuring three relationships that might form either over the span of eight hours or eight years. According to Kinda Funny Games, Half Past Fate will “change the way you feel about fate”. As evident in the trailer, the game features a bright and cheery retro look and feel, and is slated to be released sometime in 2019.

Developed by Pillow Castle, Superliminal is a first-person puzzle game that plays around with the concept of depth perception as the player moves objects around to complete puzzles and move around what seems to be a museum. For example, a tiny house that you found on a table can become one big enough for you to enter and explore. It’s incredibly strange and utterly surreal, and we can’t wait for it to be released.

A mother’s love is often said to be neverending, even at the expense of one’s life. In Undying, you play as Anling, a mom who has to take care of her son Cody in a post-apocalyptic world overrun by zombies. Except Anling has been bitten, whilst trying to save Cody from a zombie, and is living every moment with the knowledge that she will turn into a zombie too sooner or later. Undying will be available for early access in 2020, for both PC and consoles.

CastleStorm II is the sequel to the popular 2013 tower defence game of the same name, and features both a co-op and competitive mode and delivered with amazingly cute graphics. As the game puts it, players will have to build their kingdom, and defend it against enemies by fighting them strategically, or taking them head-on. CastleStorm II will be available on the Epic Game Store by late 2019.

That is about it for brand new game announcements, but there are still many interesting gameplay demos revealed for upcoming games during the showcase. We highly recommend you get yourself comfy before you proceed as there is a lot of games to go through.

Fling To The Finish

Mare, Deliver Us The moon, Recompile

Kinda Funny Games promised 60 indie game titles and they certainly delivered. In a sea of big AAA game titles, it is certainly heartening to see that attention is also brought to indie games. With a number of indie games slated to be released in the coming year ahead, it looks like 2019 and 2020 will be another great year for indie games. 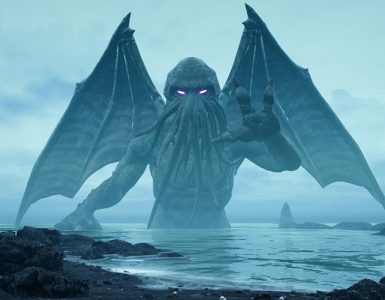 Prepare to be spooked with Lovecraftian entities!