The popularity of MCU (Marvel Cinematic Universe) films has pushed Marvel to become a household name in recent years, but it’s not as well-known as what fans might think. In an amusing turn of affairs, Christian Bale, who’s set to play Gorr the God Butcherer in Taika Waititi’s Thor: Love and Thunder, admitted that he had no idea what the MCU was before joining the film’s cast.

In the latest issue of Total Film, the actor made known of his cluelessness when asked about the reservations he may have had upon taking on another comic-book role after his stint in Christopher Nolan’s Dark Knight trilogy.

It’s unclear whether the actor was referring to Disney’s collection of Marvel films as a whole or just the abbreviated term of MCU itself, but it goes to show that not all Hollywood personalities — including those who have donned superhero costumes in the past — are well-versed in geek speak.

And it comes with consequences, too. In preparation to embody the role of Gorr, Bale shared that he committed the mistake of Googling the comic character. “You sort of go, ‘I know what he does.’ It’s right there in the name, isn’t it?” he said. “But I did make the mistake of googling him and, oh no! [In the comics] he runs around in a G-string all the time. And I thought, ‘They don’t have the right man for that!'” Fortunately, the design was scraped by Waititi, who, in Bale’s words, did “what he could do with this in front of a blue screen.”

Thor: Love and Thunder will strike cinemas on 8 July 2022, and stars Natalie Portman as Mighty Thor (aka Jane Foster), Tessa Thompson as Valkyrie, and Chris Hemsworth as the titular thunder god. It follows Thor as he embarks on a journey to find inner peace, only to have his retirement plans thwarted by Gorr, a disillusioned believer bent on killing all the gods after experiencing personal heartbreak. 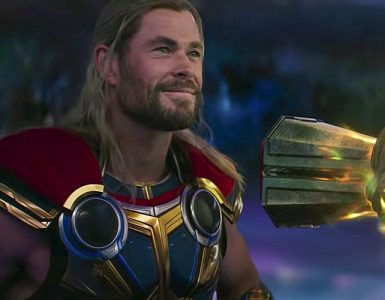