G-SHOCK has announced the releases of their newest GSW-H1000, a G SQUAD PRO smartwatch powered by Wear OS by Google.

The latest addition to the sporty G-SQUAD line, the GSW-H1000 comes in three colourways (Black+Blue, Black & Red) and has plenty of functions to help you track your fitness goals and activities.

The smartwatch has the toughness of a G-SHOCK such as shock resistance and 200-meter water resistance, and is officially the first G-SHOCK smartwatch to run on Wear OS by Google.

It’ll feature an optical sensor to measure heart rate, a compass, an altitude/air pressure sensor, an accelerometer, a gyrometer, GPS functions, and more. Built for all your athletic activities such as running, swimming, and cycling – the watch can essentially capture your data on distance, speed, and even pace.

Meant for heavy use, the design of the GSW-H1000 features a soft urethane band for flexibility and durability.

Last but not least, with Wear OS by Google, the smartwatch will come loaded with Google Apps and services like Google Assistant or Google Fit. There’ll also be plenty of other apps available on Google Play for users to download.

It’s interesting that Casio has adopted Wear OS after all this while considering that Google’s software effort is not seen as robust as Apple and Garmin. We’ll have to see how this implementation goes. 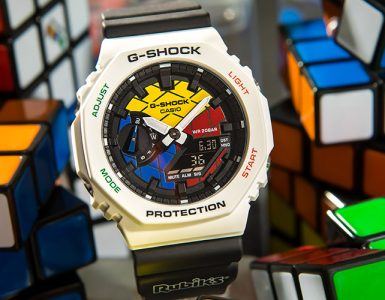 Who wouldn't want a watch themed after one of the best-selling toys in history?