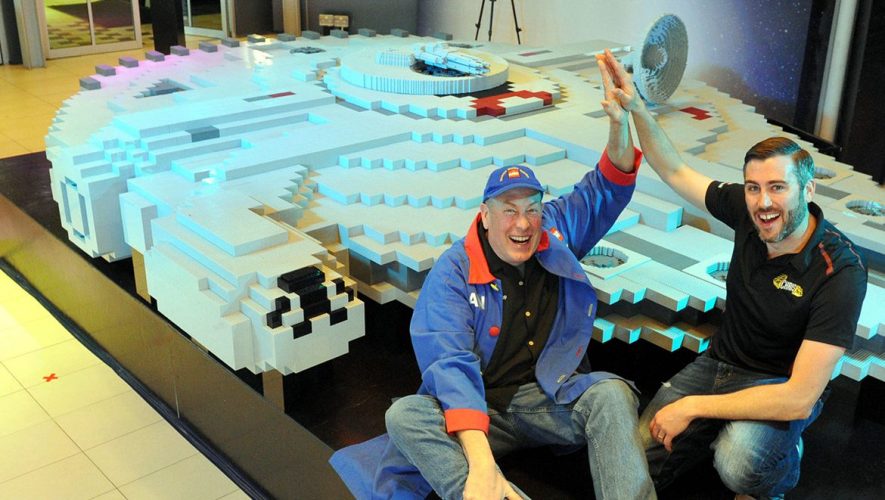 There’s a big reason to ring in Star Wars Day, aka May the Fourth – and Revenge of the Sixth – at LEGOLAND Malaysia this year. The Johor theme park unveiled the world’s largest LEGO Millennium Falcon built by father-son Master Builder team Daniel and Christopher Steininger on May 3 2016 in line with Star Wars Day Celebrations. The duo had completed the 4.8m X 3.6m model over the May Day-long weekend using almost 250,000 bricks. A feat that would have only been possible with the help of thousands of children, who streamed in to help make history at the park!

We sat down with Dan and Chris to break down what it takes to build a Millennium Falcon of this scale and learned that like many things in the world these days it’s all about the budgets. Dan, revealed that a bigger Falcon was always possible, however, time was a major contributing factor in the build as well. If they were given more time and more bricks, recruiting more kids to complete the task would become the next priority as well!

But bigger isn’t always better as the original design for the Millennium Falcon was simply flat and big like a pancake. We imagined that all Master Builders who revel in all things LEGO get their greatest inspirations whilst in a dream as with Dan. He shared that in order to speed up the time of the build, stilts were placed in the model, and built the Falcon right on top of the platform. It would be the very first time Dan and Chris would be using this innovative technique and by the look of things, it has turned out perfectly fine in no time while using even lesser bricks than required.

While the huge Millennium Falcon at LEGOLAND Malaysia might have been a piece of cake, putting together the 10179 Millennium Falcon without an instruction manual might be the most daunting task even for a Master Builder. Chris shared the love that LEGO pours into their sets is revealed in the many intricacies and details. “If you put one piece wrong in one spot, you’re going to miss it in another,” added Dan. With a hint of pride in his voice, the senior Steininger shared that Chris was able to put together a LEGO model faster than he could with a booklet of instructions. But, if it was going in blind, Dan was pretty confident that he could come out tops any day of the week.

Even Master Builders need a break and working with LEGO day-in and day-out might get monotonous at times. It comes as no surprise that the Steiningers move onto other materials in their free time to maintain an excellent working relationship outside of LEGO. Most recently, the father and son duo completed a cedar-strip boat over the course of two years by hand. While the rest of the world blows off steam building LEGO sets, they build boats.

To round things off, we prodded the Master Builders if they could share with us their next top secret project after the Millennium Falcon and they shared that their next big reveal would be at Comic Con and it would be something superhero-related. As much as we had insisted, lips were sealed before Dan whispered, “It could be dark…”

Or perhaps then it might be many many shades of grey in the mix as well. All will be revealed soon!

The Millennium Falcon will be on display at Legoland Malaysia throughout May. Visitors during the May 7 to 8 weekend will be treated to an Imperial March by a 90-strong contingent from the 501st Legion as well as witness the completion of two giant TIE Fighters from The Force Awakens by the resort’s own model builders.

Visitors to the park in May will also bring home a mini Millennium Falcon. Limited sets are available only on weekends. All children dressed in Star Wars garb will have their entry waived for the month.

A Legoland Malaysia exclusive commemorative Lego Duplo brik for Lego Star Wars Days will be given to families that complete the Star Wars Activity trail.