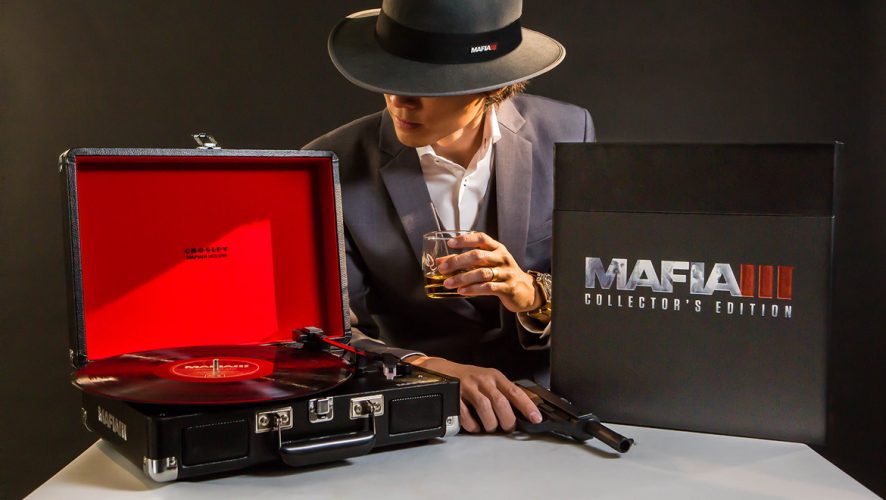 The secret’s out. The Mafia III Collector’s Edition comes loaded with physical and digital items, and Geek Culture has one set on hand, to take a much closer look at the goodies in this game that is set to take you back to 1968.

Experience life in New Bordeaux, Louisiana, as you wrestle control of the vast and seedy criminal underworld of Mafia III.

In addition to the full game and all bonus digital content included in the Deluxe Edition, owners of the Collector’s Edition with also receive the following:

Exclusive Two-LP 180-gram Vinyl Soundtrack and Score Collection
With 100 over songs in the game itself, one disc features some of the greatest hits and hit-makers of the 1960s, as well as the artists that inspired them. This mix of tunes from Rock, Rhythm and Blues, and Pop, are tunes that have helped define the 1960s, at a time of war, civil unrest, and sweeping social changes.

The second disc contains the original game score of Mafia III, and gaming audio greats Jesse Harlin (The Force Unleashed, The Secret of Monkey Island) and Jim Bonney (BioShock Infinite, Mortal Kombat) lend their talents to recreate the flavor of that era in the game. Take a Rhythm and Blues-inspired tour through a city ruled by organized crime and corrupt officials.

Exclusive Collectible Art Prints
Be the proud owner of two highly detailed litographs from Playboy and the Alberto Vargas Estate, which represents only a small portion of the vast collection of art for players to discover in the game.

The Art of Mafia III Collectible Art Book
Walk down memory lane with this 56-page artbook that examines the creation of New Bordeaux, the new world fashioned after New Orleans, in the summer of 1968.

Lincoln Clay Replica Dog Tags
These 1960’s US military issue replica tags of a combat-hardened Vietnam vet are fueled by the need for military-grade revenge against the Italian Mafia.,

Faux Leather Establishment Drink Coasters
Take a break from your revenge spree with a drink – and park them on these coasters. They represent the Paradiso Casino and Sammy’s in-game criminal establishments.

Now for the best bit. Together with 2K Asia, we are giving away the Limited Edition Mafia III Crosley Portable Turntable Player for you to use the Mafia III Original Game Score Vinyl Record (included) on, AND all the Mafia III items featured in the Swag Bag portion of the video above. There will be ELEVEN winners in total. And this giveaway is open to all residents of Singapore, Malaysia, Philippines and Thailand.

This lightweight, 3-speed, suitcase-style player comes with its very own built-in speakers, and a headphone jack to plug your favourite cans into. Or, you can even flip the switch to turn on the Bluetooth function on to connect to any Bluetooth-enabled speaker of your own. This highly exclusive player cannot be purchased anywhere and a must have for any Mafia fan.

Here are some additional features:

Each swag bag will come with the following items:

The giveaway is open to all residents of Singapore, Malaysia, Philippines and Thailand. The giveaway closes on  22 October 2016 @23:59hrs (GMT+8). 11 lucky winners with the correct answers will be picked at random. All prizes will be shipped to the winners in their respective countries at no charge! The winners will be announced here and be notified via email by 24 October 2016. Good luck!

Special thanks to our fellow geek friends at No Average Joe for whipping up the unboxing video!

Mafia III is out in stores from 7 October 2016 on PC, PlayStation 4 and Xbox One.